It’s as official as it gets. The big software and hardware giant, Microsoft, have secured Mojang, the developer of the Minecraft kart-racing franchise. The deal went down for a cool 2.5 bullion. I’m not sure what the value of gold is these days, but it sounds like a pretty big whiff.

Even though Microsoft now owns Minecraft (and all of its associated guff like lunchboxes, pencil toppers and creeper hoodies), the versions of the game for other systems will not be affected and will still be released and supported. Well, there’s that, I suppose. 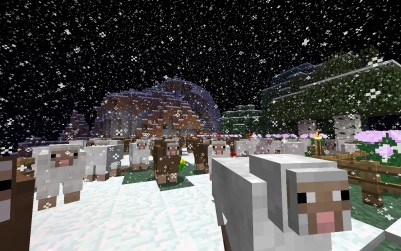 A cold winter ahead for the hard-working sheep at Mojang.

Buying a talented development studio is something Microsoft certainly hasn’t done before. There is no evidence of the company previously running their new acquisitions into the ground by coercing them to produce Kinect Sports titles (Phil Spencer just hates the word “forced”). It’s not like this happened to a big name company such as Rare in the 2000s.

Oh wait, that did happen. The founders of Mojang are fleeing the sinking ship. Wise move.

My prediction is that Minecraft: Nuts & Bolts II featuring Conker the Squirrel will be released in 2017 with support for Facebook Rift and the Microsoft Vitality Sensor plugin. Pre-order for an exclusive It’s Mr. Pants player skin.

Just in time for Halloween (in GameCola terms), John Rizzi takes you on an eerie journey through The Haunted Mansion for the Nintendo GameCube.