Released under the Dynasty Warriors brand worldwide, the Gundam Musou series is very big in Japan. There’s been a few games in the series, as you may well be aware of given the numbering in the title, although this is most definitely the best of them all. The goal is to win multiple different battle scenarios and to progress the plot of the game by befriending people and learning what makes them tick.

Even though the game is essentially a button masher, there’s far more to it than just that. Battle rules dictate different situations, such as a rescue mission or a full-frontal assault. (Speaking of which, there’s a guy called Full Frontal in the Gundam universe. I know, it’s like the best name ever.)

Each battle has crucial elements such as units that mustn’t be felled, or rendezvous that must be terminated. In performing these tasks, the favor of the battle can sway dramatically toward either side, almost guaranteeing victory. There’s a battle gauge that will allow your character to be revived, but at a cost. If the battle gauge is empty, your defeat will likely result in failure of the mission.

This game is effectively just Dynasty Warriors, but with a sense of speed and flow of combat that I feel the traditional series is lacking. Also, putting large battling robots into a game will always make it appeal to me much more. 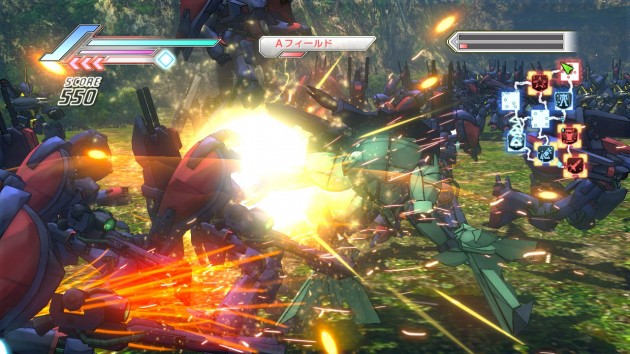 Where in the World is Sayla Mass

A very interesting story mode awaits in Dynasty Warriors Gundam 3. Even though I had not seen a single episode of Mobile Suit Gundam before I started playing this game, I was still interested in finding out who all the characters were and what they do. So much so, in fact, that Dynasty Warriors Gundam 3 inspired me to start watching all of Mobile Suit Gundam from the very beginning.

This story takes characters from every era of the Gundam animated series and places them all in an unfamiliar world, which means you don’t even need to have any prior knowledge of the series to be able to enjoy this game and appreciate its plot. Robots fighting robots—is there even a plot? Well, yes.

The whole thing about Gundam that makes it so engaging (and that has allowed the story to be told endlessly) is that the relationship between the characters is perhaps the most important part of the series. The way it begins, is steered through, and finishes, is seeped in human emotions and beliefs. This isn’t a story about war; it’s a story about the people in the war.

Some characters are missing, even though I’ve played over fifteen hours of this game already. The inclusion of Sayla and Bright, even only as Operators, would make this even better. It is a shame they’re not here, but considering that there are forty-seven characters, I’m not going to fuss too hard over their absence. I would have happily dropped Hayato and Kai in their place, but I don’t get to decide these things. 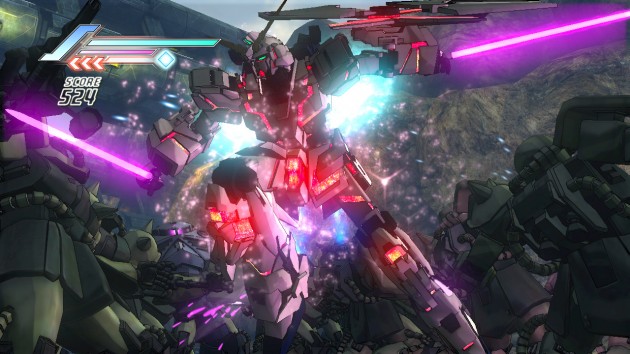 These screenshots don’t support my claim that there’s a great story.

There’s something about gratuitous violence that doesn’t do it for me anymore. I’ve seen a thousand games with geysers of blood and mountains of gore. I’m simply desensitized to the whole affair. Quite frankly, games are too violent.

When robot body parts are flying around and explosions replace the blood, we’re onto a winner. I like how in Gundam Musou 3, the enemy debris flies toward you like a swarm of angry bees. Doesn’t matter, because it is reflected off your mobile suit and you don’t flinch. It doesn’t need to be there, but it builds upon the atmosphere of battle immensely.

You slay hundreds of enemy mobile suits, ripping them to pieces with your lasers and missiles and beam swords. Each mobile suit in the game, of which there are over forty, have their own weapons, move sets and specific features. All of them can be re-built, upgraded and enhanced based on who is piloting the suit, their upgraded skills, battle partners and operators.

One of my favorite skills, Blast Strike, makes all enemies explode no matter how they’re defeated. The explosions damage the other nearby enemies, and set off chain reactions. All of them explode in a non-bloody flame-filled manner. It is satisfying when you land a strike and a whole bowling alley of enemies falls down, and proceeds to EXPLODE.

Mighty fine, I must say.

Against larger enemies, such as bosses, you can clash weapons. This can lead to performing ultra-powered attack combos that absolutely decimate the opponent. And then they explode. You have got to love it; it’s the law. 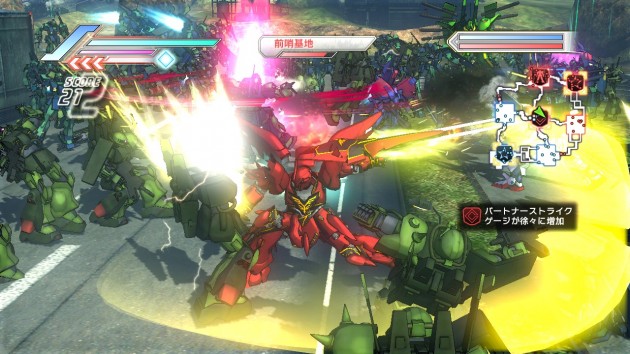 I assume more robots are getting destroyed here. Explosions!

I don’t think I’ve heard a more fitting soundtrack in a videogame about war. The rock music really boosts your drive, and gets you all riled up for combat. The reflective tones in the options menu let you relax and chill. The themes that play during special battles are amazing. Unfortunately, the songs that come from other Gundam videogames and episodes are missing in the versions released outside of Japan, and you notice the music selection is far more limited in these regions. Nobody knows quite why they’re removed, but I’d hazard a guess that it would cost very little to license these songs and Namco Bandai are too tight to think about making their fans happy.

I probably wouldn’t change anything about this package except for stuffing Sayla Mass in there (because the world needs more Sayla Mass—Frau Bow, too, but not as much). Although the mission progression can sometimes be a confusing affair, once you figure it out, you’re golden. Really, this is the kind of game were you benefit from using a guide, so don’t consider it to be cheating. Most of the missions, but not all, can be played cooperatively with a local player, via split-screen multiplayer. The game can also be played online against players around the world.

The game has very minimal slowdown, even when two players are on the same television screen. Die Nasty Robot Warriors 3 is the best in robot-on-robot violence and rocks my world hard. Go grab a copy if you like robots beating the shit out of each other and stories about wars in outer space. I don’t think they could make a better installment in this franchise, ever. This is the ultimate crowning achievement of all games about robots to ever exist. It deserves your love. 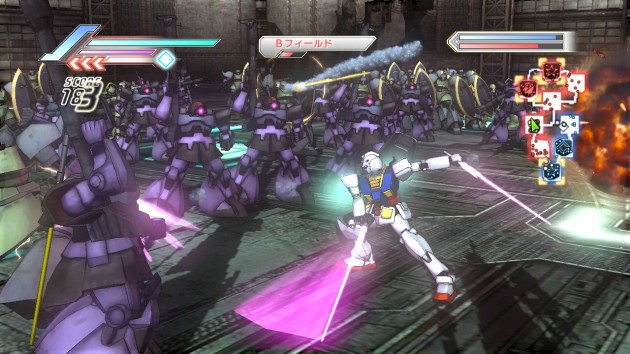 More robots. I am glad that we’ve got that covered.

It's an RPG which replaces its battles with cat pictures.