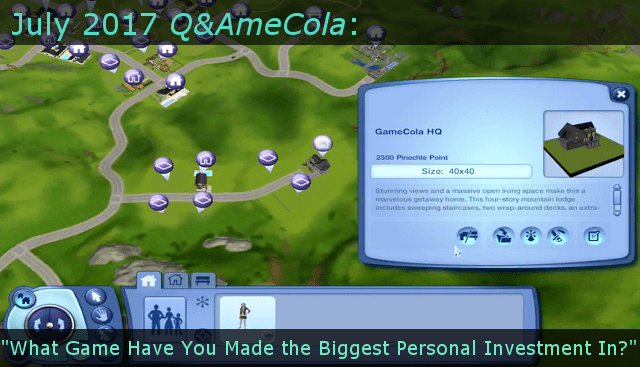 This month, our GameCola staff share the games that most drained their energy, wallets, and SAN points, as they answer the question “What Game Have You Made the Biggest Personal Investment In?”

Like any other pastime, videogames require our time, money, focus, and emotional capital. Some games, like that free browser time-waster you beat in 2 minutes while queuing at the grocery store checkout, are fleeting dalliances. Others consume much more of our attention and resources—whether it’s the dungeon crawler you’ve sunk over 300 hours of gameplay into and have yet to earn even 50% of the achievements, or the game you bought a brand spankin’ new system and hardware just to operate, or the puzzle game that turned your brain into goo for weeks because you insisted on solving it without hints or a walkthrough, or the game that dragged you through such an emotional wringer you can’t stop thinking about it and now spend most of your waking hours staked out in fandom chat rooms trying to figure out what it all meant.

You might also have taken a spin in the developers chair and slaved countless hours over your own pet videogame project—writing dialogue, drawing sprites and backgrounds, composing music, and coding until you were sure your fingers would fall off.

Videogames can be an immersive and taxing hobby, with the payoff often being directly proportional to the degree of investment.

I’ve already talked at length about the game with my #1 most emotional investment, so I’ll skip past that one. I’ve also already written about the game I’ve had the greatest number of hours playing. I’ll also skip talking about the (two) time(s) I made 100% of the code and content for a videogame.

No, there’s a specific tale I want to tell today.

The year was 1996, and videogames were changing in big ways. The Sega Saturn and Sony PlayStation were both big recent releases, and the Nintendo 64 was looming just over the horizon. For me personally, however, it was my own videogame renaissance in the classical sense. Rather than chasing after the latest and greatest, I was discovering all the old games I’d somehow never played—the likes of Dragon Warrior IV, the later Mega Man games, Zelda II, and others. I also spent a great amount of time during this period revisiting my favorites at the time, giving Final Fantasy II or Link to the Past another playthrough.

But, there was one game that received the most play time by far, and for reasons I still don’t understand to this day. I’d beaten the game before. Many times—it wasn’t that hard, or even that long. I’d already tired my parents out driving to every used game shop within 20 miles, so I was stuck with what I had.

That still doesn’t explain why I spent hours every single day grinding for levels in Soul Blazer.

For those not familiar with Soul Blazer, the game has a limited amount of EXP to be gained. There’s a limited number of monster lairs in the game, with a limited number of monsters in each, meaning that there should be a finite amount of experience at the end of the day. This wasn’t entirely accurate, however: Very rarely, you’d come across monsters that spawned with the room. These usually gave pretty low EXP, but there was one exception…at the very end of the game, there were rolling silver wall block things that spawned in the couple of rooms before the final boss—conveniently right next to a portal to your save point/free heal room.

4,000 EXP each. With maybe…8 per room? I’d just walk through the two rooms, then walk back to the save point…get my free heal, walk back out, walk back in.

Until I reached the max level, 50.

Meaning that I’d gained a grand total of 99,999,999 experience points, of which you’d gain maybe 500,000 naturally by playing through the game. And which was completely pointless as the game is easily beatable at that point, and your only gains are two hitpoints per level.

That’s approximately 24,875 rolling silver block things that I defeated. If we say that it was maybe 30 seconds per room with 8 of these per room, that’s 16 per minute, meaning that I spent…

You know, 26 hours doesn’t seem like that much in the grand scheme of things. It sounds about right that it took me about of month of playing a couple hours a day, which is certainly a decent amount of dedication, but not “extreme” by today’s standards with your Minecrafts and your Skyrims and your Worlds of Warcraft.

I think I need to rethink my life. In general. 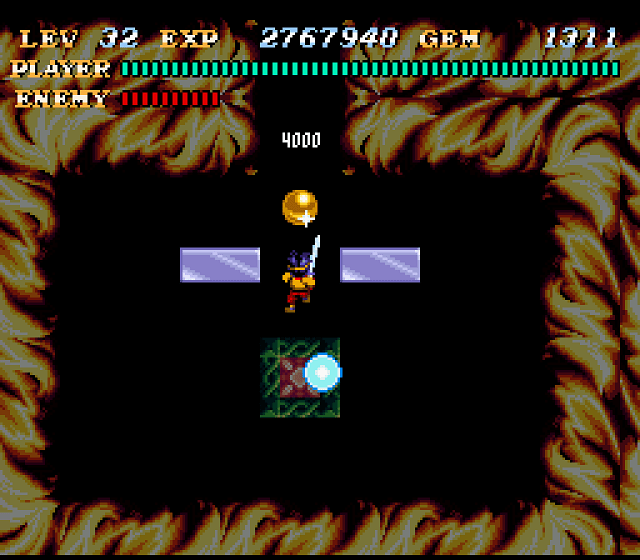 An exciting new game from the makers of “Watching Paint Dry” and “Waiting for Water to Boil”!

I grew up on the Zelda series, but Twilight Princess for the Wii was the first Zelda game I really played because my uncoordinated self was pretty good with motion controls. That being said, I devoted myself to 100%ing the game. After catching the Hylian Loach and beating the Cave of Ordeals, I only had a few Poe souls and four heart pieces left before I could claim victory over the game. Then SOOOOMEBODY decided to copy my game, but instead copied their pathetic beginning save file over my nearly completed masterpiece, AND I LOST ALL MY PROGRESS!! I haven’t been able to touch the game since, because I’m still bitter about it. 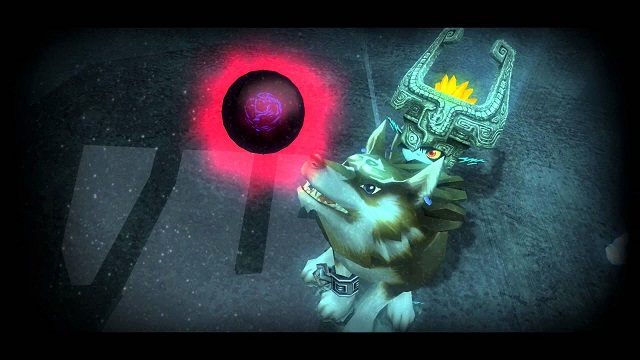 Since getting it for my 16th birthday, I’ve put so much time and money into The Sims 3. So many hours of my life were wasted creating families and then deleting them to start anew. I have almost every expansion at this point, and I bought a lot of stuff from the online store as well. I haven’t played it in a while, but every time I think I’m done playing it, I go back and start it up again. 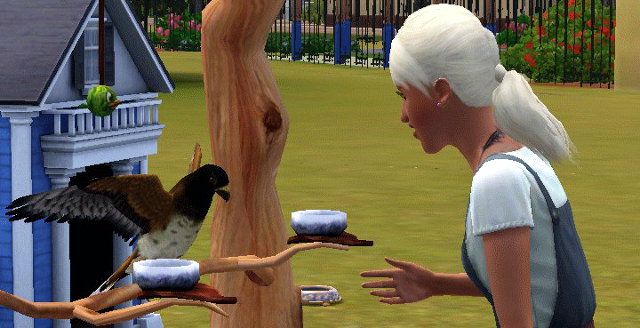 Anna, bonding with birbs in every game.

The game I spent the biggest personal investment in is Minecraft. Now that might seem like a really silly choice. “Huh? Minecraft? But all you do is build!” Well, yes—but I’ve spent hours upon hours getting lost in this blocky world. I just have so many memories with Minecraft. All those times I pranked my friends. Other times where I’ve wandered off (anyone who has played Minecraft with me will tell you I do like to wander off when something catches my eye and I run off without saying much) and have had people come looking for me because “I don’t know how the coordinate system works and I have no idea where x 370 y -1,527 is.” Many heroic times where I jumped into the fray to fend off a zombie invasion. And other times when I faced my Minecraft fear of heights (I am only afraid of heights in Minecraft) and scaled the highest mountain in search of new and exciting things. I’ve seen the completion of many building projects, I’ve suffered some stupid and noobish deaths. There were times I traveled all across the map just to find horses (I love horses in Minecraft). I’ve been with the game since 2013 and it’s been a joy to watch the game grow along with my own Minecraft skills. 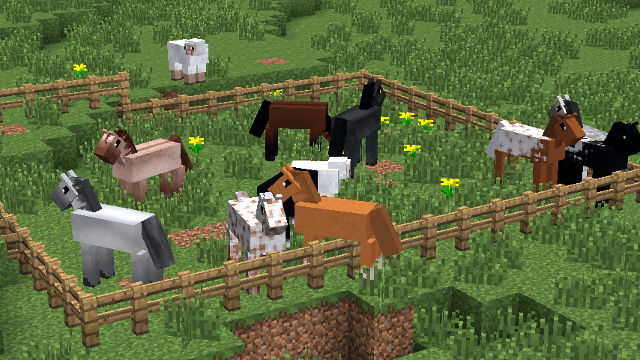 “Go right to the source and ask the horse. He’ll give you the mods that you’ll endorse…”

I spent a huge amount of time doing chocobo racing and breeding in Final Fantasy VII. I think some people genuinely liked the chocobo racing stuff, since they made a stand alone game for it. It took a lot of races and random number crunching for the breeding to get the chocobos I needed to finally breed my golden chocobo. Chocobos don’t matter so much once you have access to the air ship, other than to reach an island that can’t be landed on with the ship. What’s on the island? The famous Knights of the Round Materia. Sure, the spell is impressively powerful, but it gets pretty exhausting to sit and watch after the second cast.

And on top of the chocobo grinding, there’s the normal amount of grinding for experience, spell proficiency, etc., required in any Final Fantasy game, so all in all, I felt the most scummy after finishing FF7 compared to other titles. 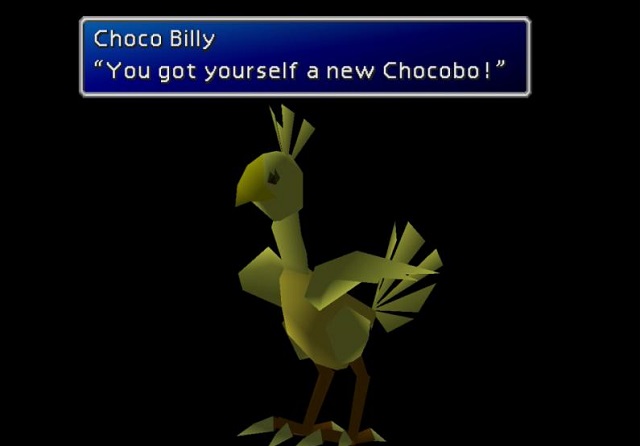 Yay! I think I’ll name him Massive Waste of Time.

Many, many moons ago when I was first playing through Final Fantasy, I painstakingly hand-drew maps of the entire game including the overworld and all dungeons. They sprawl across page after page of computer paper, taped and stapled together into a pile of Frankensteinian messes.

Even though I was a fairly rubbish cartographer, and there are a few sections on the maps that never quite matched up properly, I still feel a rosy glow of accomplishment looking back at all that effort. They will always be a physical reminder of my love and devotion to that game. 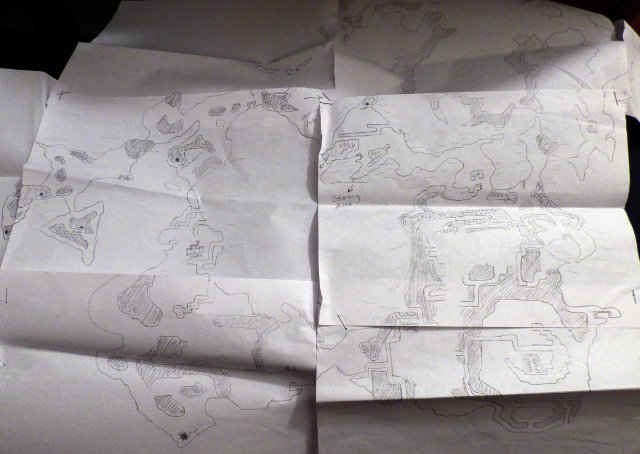