But, even more so, it takes a lot of luck.

Pizzarian wasn’t particularly successful when it was originally released. It was my second game, after Star Runner, and despite spamming my Twitter and Tumblr feeds with links to the game, links to previews and trailers, links to the one or two reviews I managed to get…I could barely even convince people to claim the free download codes I was sending out every day. I sent out over 100 emails to review sites large and small, indie gaming podcasts and YouTube channels, and anywhere else I thought might have some iota of interest in a four-color pizza delivery business sim space shmup like mine.

Over 100 emails, and only four claimed the free review codes I included. Only one of those sites actually commented on my game. Being nearly six months after release at this point, I had pretty much given up on trying to promote the game any further. I had been running it in Desura’s Cheap End sales alongside Star Runner, but I hadn’t done much with it beyond that.

That’s when my first stroke of luck hit.

For whatever reason, Desura decided to include Pizzarian in its Weekly Release Highlights video on October 6th, and they followed it up with posts on their Twitter and Facebook. Banking on this, I spent the entire day running around on social media—posting my own messages, sharing Desura’s posts, and handing out free download codes wherever I could. I set the game at 50% off, but I could barely even get people to take the free codes, much less buy the game. I didn’t want to lose the free press, so I went all-out and put the game on sale for free.

And…not much else really happened, honestly. I was getting maybe a few dozens hits every hours, but even for free, the game was barely getting any downloads. There’s only so much you can do yourself. It doesn’t matter how much you promote your game, especially as a solo developer—unless other people are talking about it, especially popular sites or famous people, nobody’s going to care.

The next morning, I load up Desura and… 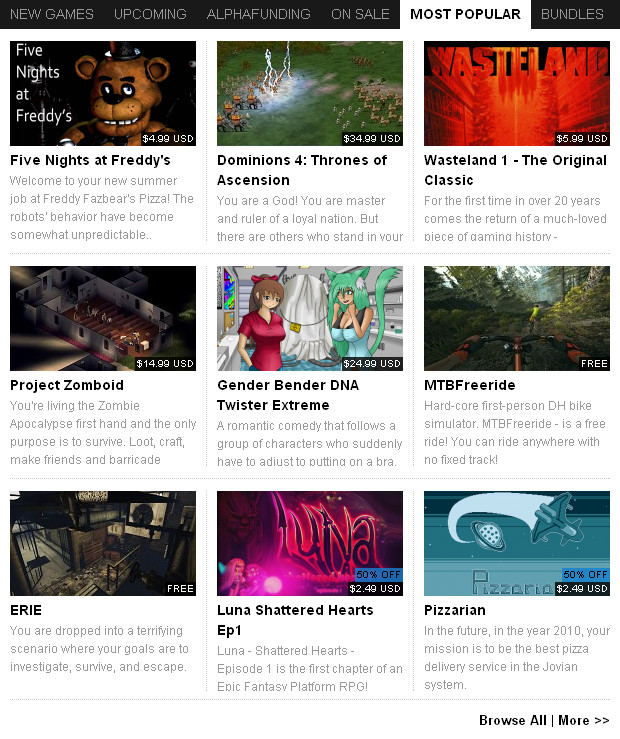 What’s this?! I’m on the front page? Did something happen while I was asleep—was I posted on Reddit or picked up on by some reviewer? Where did everyone come from? Desura’s analytics only let you see where hits came from in “the past few minutes”, so that’s kind of useless. Let’s go check the demographics… 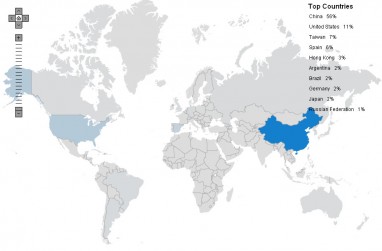 How about that. Apparently, China loves my game.

I later found out that one of the people who claimed a free code the night before posted about the game on a Chinese gaming forum—and, not only did they enjoy the game, but they were engaged enough to vote for it on Steam Greenlight. I’d never gotten this kind of support, before. Counting the number of downloads from China from Desura’s demographics, I had more than half that number in new votes on my Greenlight campaign, and many of them were commenting as well. Most of the comments just said “voted”, sure, but there were some that gave encouragement. Mostly “don’t cry”, but I’ll assume that it was meant in a good way.

Supremely encouraged, I got back at it on Twitter and did my best to keep my game on the front page. Not every user checks the front page—but, sites that post links to deals do. Desura seems to only rank “Most Popular” games by views and not downloads, so my job wasn’t entirely impossible. I started to get picked up by other sites: A Spanish-language gaming site, a Polish gaming forum, a Brazilian Steam community, a Japanese gaming blog. I was a little sad that my game couldn’t be in their native language, but I hoped they were enjoying it nonetheless.

Eventually, I was seeing my game on deal and sale aggregators, and I started making my way up the list! Slowly but surely…and, then suddenly! My game got posted on Reddit—twice! The hits were pouring in! The next morning, I woke up and my game was #2!

It was time. I quickly wrote up a press release and targeted it to the top 10 contacts on my list. Pizzarian positioned to take Five Nights at Freddy’s‘ top spot on Desura?! Granted, people were actually paying for Freddy’s, but nobody needed to know that. It made a pretty good subject line, I thought.

That’s when my second stroke of luck hit.

I got a single text-only link in the middle of a long list of deals posted on Kotaku.

But, it was enough. That tiny link on Kotaku outdid everything I got from Reddit. Thousands of people came flowing in. It was time to execute my master plan! Seeing that I was nearing my peak, I flipped the switch and set the game from 100% off to 50% off. With thousands of people seeing my game each day, surely I’d make at least one sale!

Things eventually died down. I had my fifteen minutes of fame. I had cruised my way to a little over 2,000 downloads, and I gained almost 10% on my Steam Greenlight campaign…but, a week later, and there’s nothing left. No sales, no residual buzz beyond maybe a couple dozen hits a day still coming from the Kotaku and Reddit posts.

What can I say that I’ve learned? Maybe that I should take fellow GameCola staff member Dan Castro up on his gracious offer to help with translating my games, since I seem to get a lot of interest from people who don’t speak English. Maybe that it’s good to have friends who post on Reddit, since they’re pretty strict about self-promotion, but you can gather a lot of interest there. And, definitely that sending emails out to huge sites like Kotaku are always worth the long shot, seeing that even the tiniest mention can lead to thousands of hits. I can only imagine the kind of interest that would be generated by a full review.

The support of fellow developers and reviewers was also crucial to getting started. Even if it was only a couple hundred hits at most over the course of the whole ordeal, the retweets, likes, and shares of people in the indie gaming community were what pulled me onto the Desura front page at the start, putting me in a position to get noticed by other sites.

Even if I didn’t make any money from promoting my game for three days, I’m glad that I was at least able to get even a moderate amount of downloads. All of my previous campaigns have ended with ten or twenty downloads at best, and seeing what worked and where people came from gave me some interesting insights that I can use for promoting my next game. I just need to hurry up and wrap that one up!

Sony's big announcements at E3 2018, summed up for your easy consumption.