What can I say about Sweet Home that hasn’t been said by someone else? Probably a lot, given that this was a Japanese-only release, but I’m going to try my best not to break any new ground with this one. After all, we wouldn’t want to dig up anything unsavory…or do we? *Spoilers*

Sweet Home was released over 25 years ago, in 1989, by one of my favorite developers, Capcom, whose company motto is “Watashitachiha watashitachi o aisuru hitobito o kizutsukeru”, or, “We only hurt the ones who love us.” Thank you, Google Translate for that terrible, terrible joke.

All aside, though, Sweet Home is amazing. As one of Capcom’s earliest RPGs, it really shines through its aging crust. The controls are a little clunky, and the music is a bit repetitive, but those only serve to make you feel the tension and panic when you’re running from the very few onscreen enemies or trying to rescue one of your quickly dying party members. If I were to strictly criticize anything about the game, it would have to be the unnecessary leveling system. In fact, there were at least two points in the game where I got stuck just because I was slightly under level or not at full health, but I’ll explain that later.

I feel I should explain why I’m playing a horror game right now. Well, Christmas is a rough time of year for my family. We have some kind of war almost every year, in fact, and this year is no exception. Not a week before Christmas, my beloved dog died at just eight years old. I’ve been ridden with guilt for a month even though there’s nothing we could have done. So a ghost story seemed appropriate. I started streaming midnight on New Year’s and played through the first half of the game in three hours, then I got stuck; when I finally finished playing it on the 10th, I felt absolved…

It’s a dark and stormy cliché when your investigative party arrives at Mamiya Manor searching for Ichirou Mamiya’s fresco. That doesn’t seem right. You open the old and rusted gate with a creak, and you’re immediately greeted with a familiar scene. 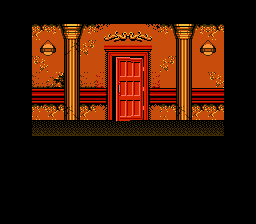 A door opens, and you meet your five party members who, massive spoiler alert, look nothing like their portraits. I wish I were kidding; the in-game character sprites and the end-game portraits look so immensely different that I tried to find a manual online to verify that the game wasn’t just messing with me. I found nothing. I didn’t look very hard, though, so please, if you find one, let me know and I’ll update this. Left to right, we have: Kazou, the lead investigator who looks like a generic anime hero; Emi, the strange girl with a key to a haunted mansion (what’s up with that?); Akiko, the clearly a nurse who turns out not to be a nurse at all; Asuka, a cape-wearing janitor dragging around a nearly useless vacuum; and Taro, the nondescript cameraman. They’re in odd rows because of sprite flicker making it impossible to take a picture. 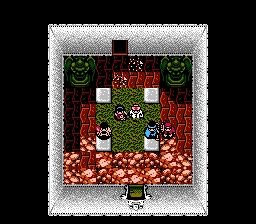 There’s a small cutscene in here: Mamiya complains about intruders a bit, blah blah blah… Oh, what’s that? Yeah, this place is haunted, by the ghost of a woman who accidentally killed her own baby, then went insane and burnt a bunch of other kids alive so that her own deceased child would have someone to play with. Did I mention that this is the precursor to Resident Evil? That’s cool, right? There’s also a few references to other popular titles from today, such as the Pills from Left 4 Dead, the Demon Wall from Final Fantasy Anything, a bunch of enemies that look like they belong in Clocktower or Amnesia, and a not-at-all-the-same-as-EarthBound ending pathway that’s all fleshy and entrail-like. Huh….entrail….end trail…neat.

After Psycho Killer, Qu’est-ce que c’est, stops complaining at you, take a minute to appreciate how amazing Capcom’s level design used to be. You have a simple room; nothing can go wrong. Two buttons, which bring up two different menus: B opens the party status screen, and A opens the command menu. Select does nothing and Start…er…stops the game… Amusing pause button. You cannot progress until you learn two things: How to team up, and how to use an item. In this case, we have glass on the floor. How do I… Now, once you’ve figured out the hardest puzzle ever, you have your first taste of exploration. This next room contains two doors; one of them is locked, and it contains a hole in the floor—a reaallly big and obvious one that you can actually fall into and die if you try hard enough. Last, it contains a note that tells you where your next immediate objective is. Across the pit, and slightly to the left. Well, since the right door is locked, and the party told me to check out the left door… 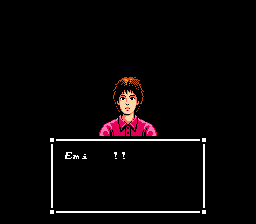 Let’s use Emi’s key to check out the right door instead! Anarchy!

You’re free to roam this empty-ish corridor for a bit. There’s some random encounters if you feel like grinding, some spirits that will whisk you away to the foyer, and an impassible rope that looks like it could burn if you had a lighter and a private investigator to wield it. Now where would you get one of those? 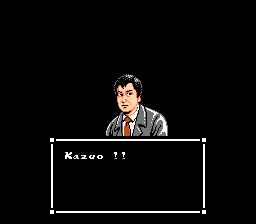 Well, we came this far; let’s go back and check the other room first. There’s a fresco on the wall and a few items on the tables. There’s a note that says to photograph the frescoes, for they contain clues on how to escape the mansion. There’s also a fruit knife that we should move into an inventory slot, a tonic that will recover all health and mana to all members, and our good friend Waxi the candle. 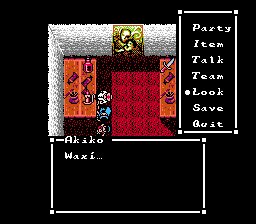 Yes, I said mana. The game refers to it as Prayer Points, but come on, are we religious Pokémon or are we adventurers? It’s all non-elemental magic, but since it’s called Prayer, we might as well refer to it as casting Holy. At any rate, we’ll take a look at this fresco. It’s a simple puzzle again to introduce this mechanic. There are four commands laid out in typical RPG format: Look, Item, Leave, and Pray. When you choose Look, a dialogue box pops up and tells you that you’re supposed to take a picture. Taro hasn’t had a chance to shine yet, so… 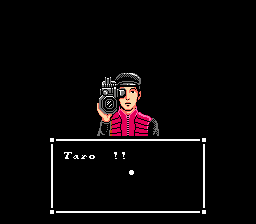 And the award for looking most like their overworld sprite goes to…!

When you take the photograph, the screen fades and, as if you are reading off the back of a Polaroid, words appear with a date. They say, “My 3 frescos will solve a puzzle”, which isn’t entirely accurate to the gameplay, but we’ll let it slide for now. Suffice it to say, every fresco, note, and message written in blood has something to say about the story or how the game is played. Some things aren’t as clear as they could be, and that’s the fault of translation in this case as in others. However, amateur translation is a topic for another conversation, so take it with a grain of salt. Pick up whatever items you think we’ll need, and let’s move on to that room we were in before. Don’t forget Waxi! It gets dark down there. 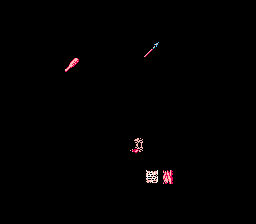 You forgot to pick up Waxi, didn’t you? Well there’s not much in this room that we need, anyhow. There’s a piece of wood, but don’t touch it; it’s terrible. There’s a note that tells you in a very strange language that if you fall into a pit, you can pull your teammate to safety. There’s a spear. We need a spear. You walk toward it, but Kazou (or whoever you’re controlling) stops and says, “There’s a chasm! If only we had a bridge…” Hmmmmmm… Well, let’s leave!

There’s actually a bridge right there: that wood from earlier. In fact, there’s a lot of it on the way to this dark room, but only one piece worth picking up, and it stands out really well. So place that blue wood over the chasm and walk over to that spear so you can move it into your inventory. The second you step onto your makeshift bridge, your beerless leader tells you that “It’s dangerous, we should team up.”

That’s how you’re told how to play: a few bits of dialogue and a bit of context for the situation. It’s pretty great, in my humble opinion. Simple in execution, not too wordy in any explanation, and just clunky enough to drive home a feeling of urgency.

So we’ve got three weapons, Waxi, and a piece of blue wood. It’s time to move on to the next area. Back to the main foyer, place your wood across the hole and walk across. Don’t forget to pick it up, because there are a few times where you need wood to cross a gap, and most of the readily available pieces will break with you on them.

Over here we have some stronger enemies. Nothing very threatening, but if worms show up, be absolutely sure to call for help. They’re the first challenging enemy you face, and you will more than likely get poisoned. There are two types of status effects, and I’m not sure what dictates which you get, but they go as follows: immediate effect, in which you are afflicted the second the battle ends, and you can usually walk around still but you shouldn’t; and delayed effect, in which it takes a few steps after battle for the affliction to begin, but when it does, that character is immediately halted and you have to use a medkit. Who has a medkit? 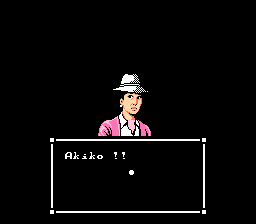 Really, why doesn’t she at least have the same red cross on her hat? It’s weird.

There is just deceptively a lot to say about Sweet Home, and I’ve got to be honest, I don’t want to end up writing a full walkthrough for it. The glorious editors would hate me for it, and I’d probably end up locked in a tower with Matt. I’d much rather marathon it on a quarterly basis on my Twitch channel here! Not a shameless pull for attention. If you do feel like reading a full walkthough, however, there is one at the Sweet Home Shrine on RPGClassics.com.

Whichever you choose, though, try your best to pull through it on your own power and not spoil it for yourself. There are a few context-sensitive points you can get stuck at, and a not-at-all well-described statue-pushing puzzle that could drive you mental, but it’s a six-to-eight- hour game and a very forgiving RPG, so give it some love.

Render: Ah ha, I'll go to Fix The Story And Go Back To The Present Time Island!