Wow. Anime Expo this year. Where do I begin?

For those of you who don’t know, Anime Expo has been a yearly tradition for me for the past three years. My friends and I buy the four-day pass, but usually only end up going Thursday, Friday, and Saturday. This year, there were a lot of pros and cons (get it?! Cons! Hahaha…I’m sorry) to Anime Expo as a whole, but I’ll recap in as clear a way as I can, complete with more pictures than you probably want or need.

Day 0 is a thing that Anime Expo started last year as a pre-ticketing day. It was a miserable failure due to a computer malfunction that basically shut down the day. This year, however, it went extremely smoothly. We were constantly moving and got our tickets in a decent time. They also had shaded areas this year, which was an improvement from previous years I’ve stood in that line. Trust me, LA in the summer is BRUTAL. And of course, my best friend Noelle and I had plenty of time for StreetPass and silly selfies. 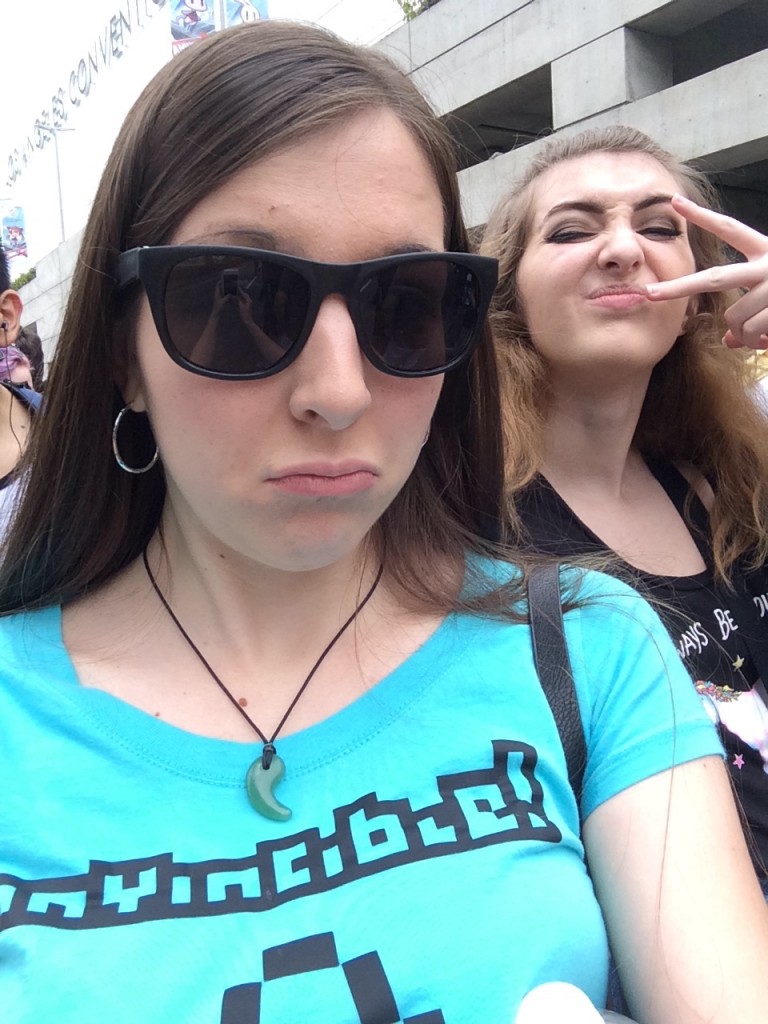 We got our tickets in about two hours, so we peaced out of the convention center, got some awesome fried chicken in Culver City, checked out the Pokémon Boutique in LA, and headed back to home base (aka Noelle’s house) to watch anime and play videogames. Overall, an uneventful but somehow satisfying day.

Thursday, the first day of the con, was pretty fun. Noelle and I got to the convention center early, as she wanted to register for the Saturday Super Smash Bros. tournament that day (that didn’t end up happening; more on that later). Turns out we got there TOO early—although the schedule said that the entertainment (gaming) and main (merch and art) halls opened at 10 am, they didn’t end up opening until around noon. The whole thing seemed pretty disorganized, and Noelle and I were pretty put out for a bit. But once we finally got into the main hall, we quickly recovered our love for the con. Artist Alley was amazing as usual and bigger than previous years (we’ve got our eyes on some matching Ace Attorney shot glasses for next year). We checked out the Capcom booth but were disappointed to find it completely devoted to Monster Hunter, with no Ace Attorney at all. 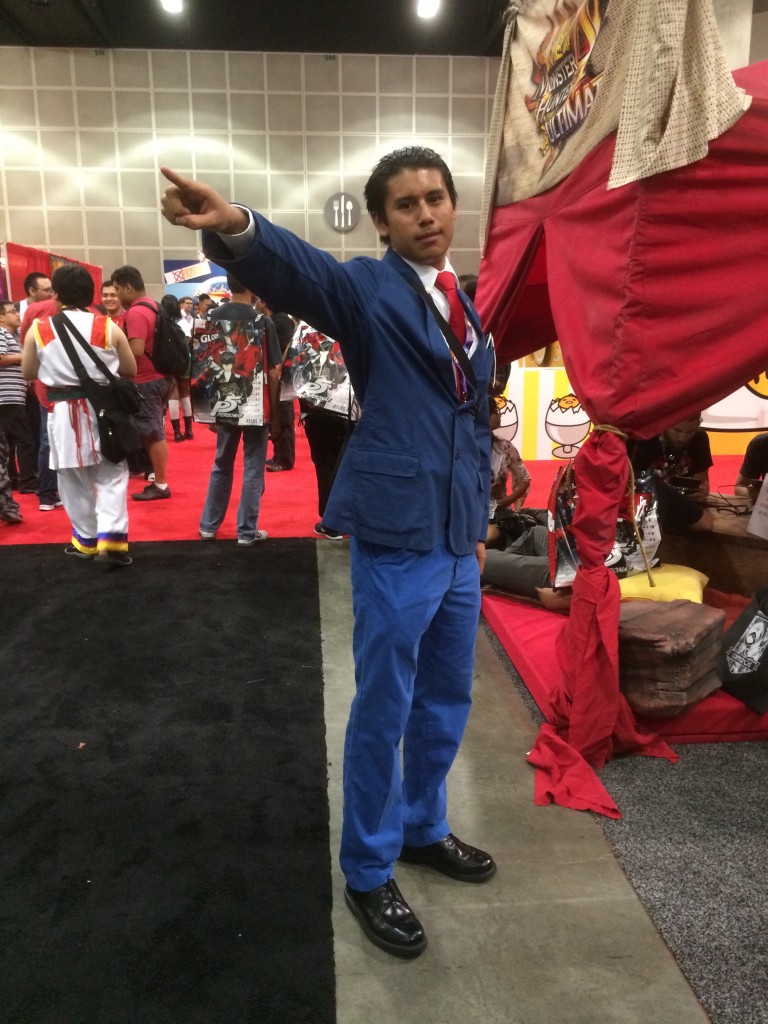 Well, except for this fine gentleman.

Considering the Dual Destinies spread two years ago, this was a bit of a letdown. But we dealt with it in the best way we know how: spending literally all our money on art.

The highlight of Thursday was meeting one of my huge LPing idols, MasaeAnela. I’d met her last year and low-key hyperventilated the entire time, so I swore to do better this year. She actually waited for me near Artist Alley (my desperation to meet her again must have leaked into my tweets). I told her that she’d inspired me to start LPing on my own and she told me to “keep at it”, which literally almost made me break down in tears. Thank God you can’t see it in the picture. 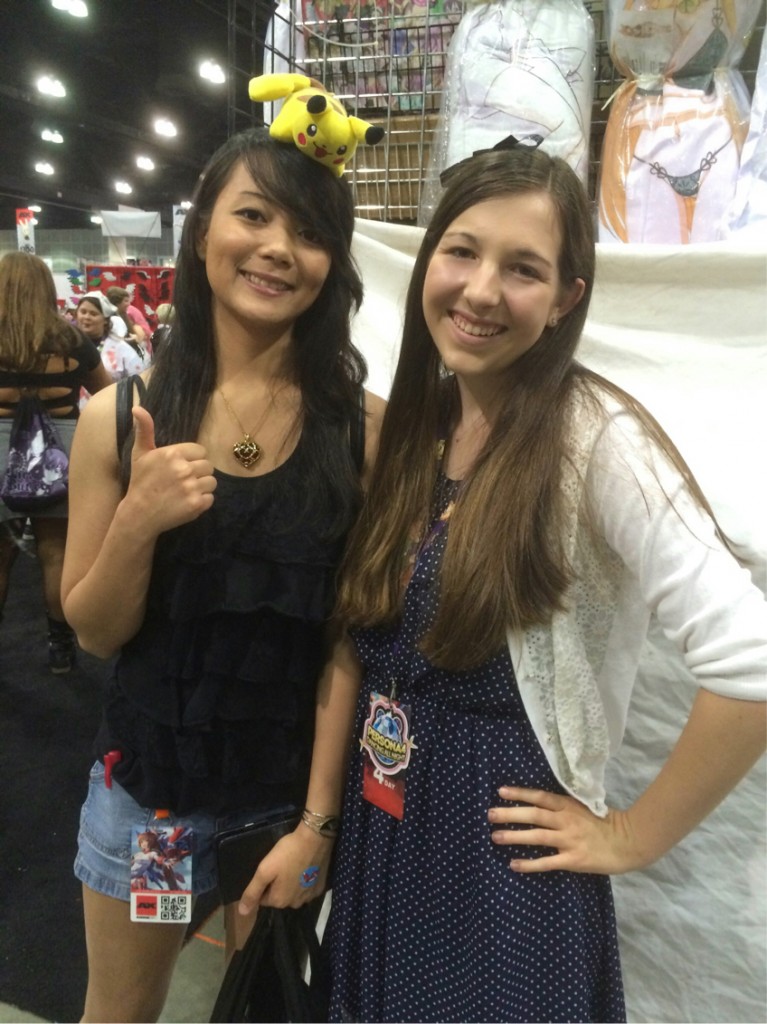 Conclusion: We love art, I’m bad at meeting people, and I looked super cute in my Dandelion – Wishes Brought to You cosplay. Lucahjin even said so. Ah, Friday. As I’ve mentioned in another article, Friday was the day that I actually decided I was too sick to attend the con. I’d been feeling a little under the weather the day before, but I woke up Friday morning barely able to move without feeling totally sick. I somehow managed to drive home in SoCal traffic and go to the clinic. I learned I had a not-contageous throat infection and that once I got some meds, I’d be totally good to go. Thank God. Usually I get sick after the con, so it was weird to get sick during (and not after, as it turns out).

However, as it happens, being sick that day was both good and bad. On the plus side, I got to hang out with some friends at Michael Gray’s bachelor party and make everyone feel awkward by talking about how hot Miles Edgeworth is. Unfortunately, I missed the Ace Attorney meetup and the announcement for Zero Escape 3. However, with antibiotics in my system and a reassurance from the doctor that I was completely not contagious, I returned to Noelle’s for our third and final day of the con.

The first thing Noelle and I did was book it over to the Entertainment Hall to register Noelle for the Smash tournament. Once we got in, we realized what a train wreck this was going to be. They kept extending the number of participants from 64 to almost 200. The brackets were poorly set up, and Noelle’s opponent treated the game as a joke. She did beat him easily with a controller she wasn’t familiar with (Noelle uses her 3DS, but the amount of interference from so many matches at once caused it to continually disconnect), so that’s some consolation. She plays a mean Zero Suit Samus. We also had the stereotypical experience of being quizzed by a guy gamer (he asked Noelle to name all of Shulk’s Monado Arts in Smash, and she did so with no problem despite him not being her main; I almost asked him to name all of Shulk’s Monado Arts in the ACTUAL game, but bit my tongue). Overall, we were really disappointed, irritated, and drained by the end of the first match. After finding out that the next round wouldn’t begin for another hour at least, and you were disqualified if you weren’t present, Noelle forfeited her spot and we went shopping instead.

I did promise you all pictures. My outfit that day was pretty stellar. 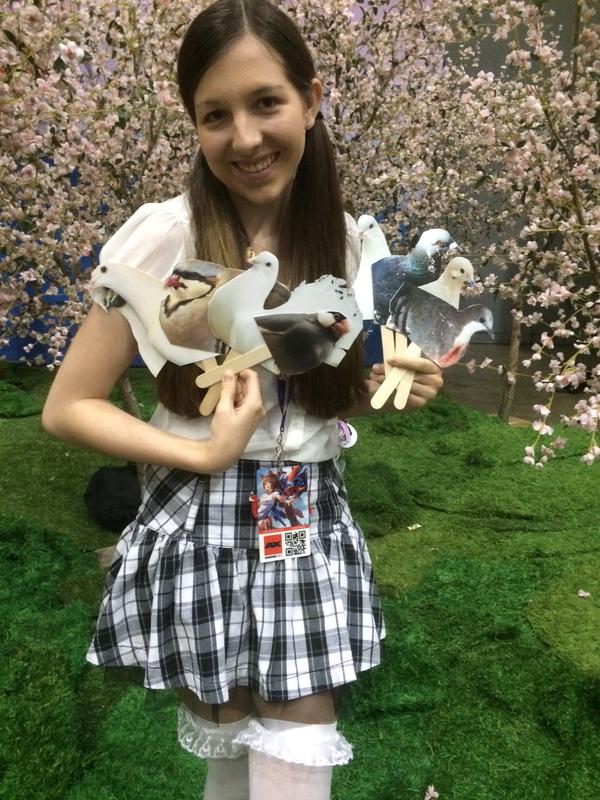 Did you think I was kidding?! Heck no! I got so many compliments on my birds, it wasn’t even funny. It was definitely the best cosplay ever and I will be pulling it out again for future use. I took a couple other fun pictures that seemed appropriate. 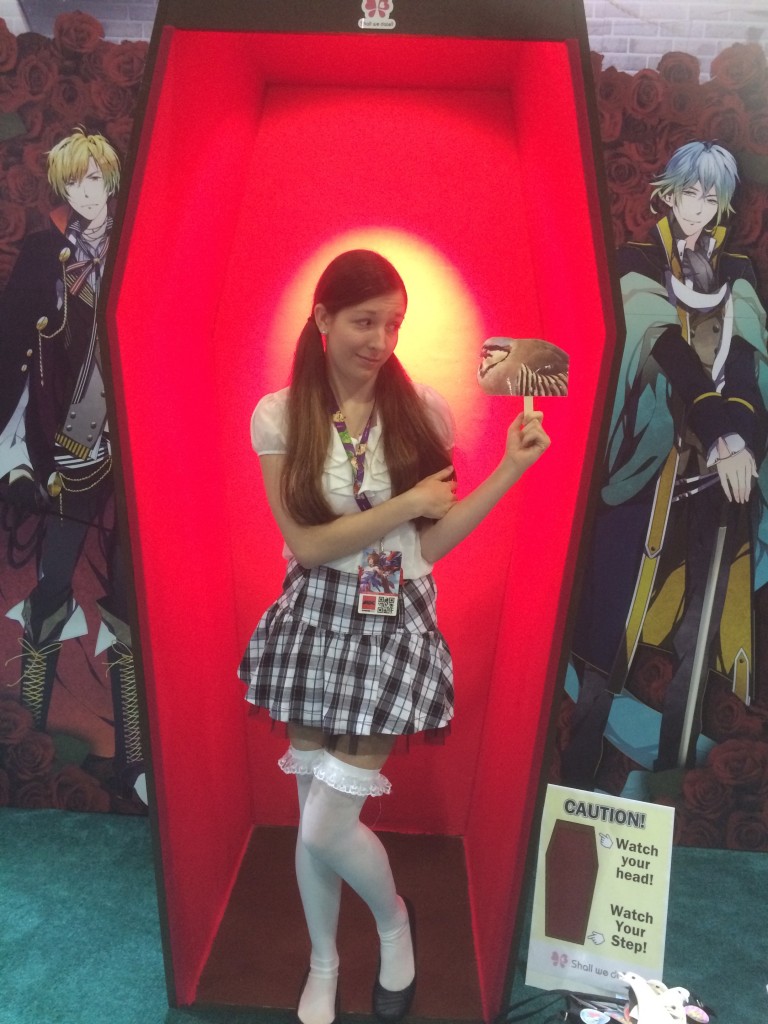 Me and Shuu in a fitting location. 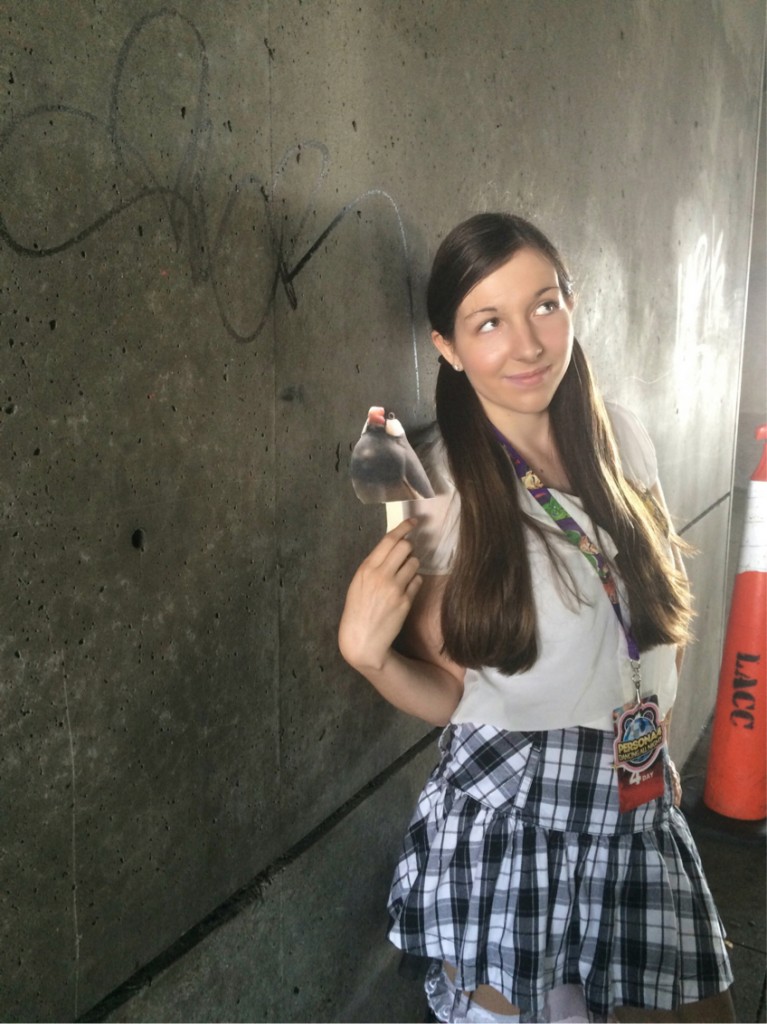 Carve it into your soul!

Also Saturday, I met Mortem3r, host of Kitty Kat Gaming! She’s another huge inspiration of mine and she totally recognized my birds! She was super sweet and we were so happy we got to see her. She’s so pretty too! Her makeup was on point. 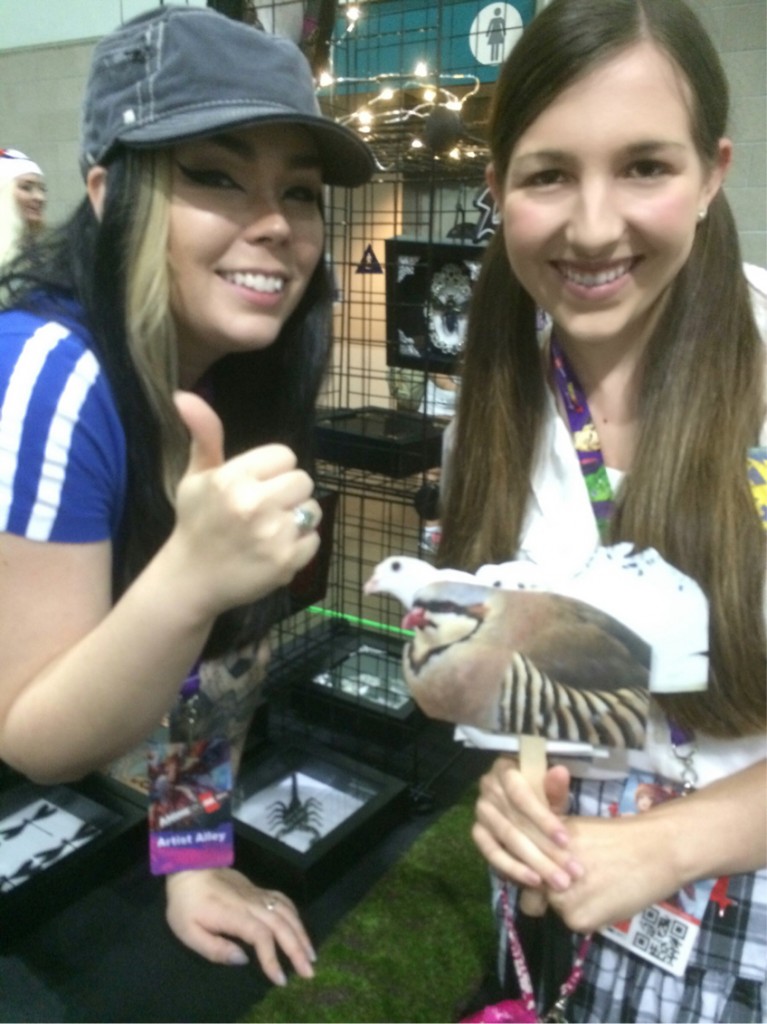 Since we didn’t end up going on Sunday, that was my last day at Anime Expo this year. I was super bummed I had to miss a day, but the two days I did go were totally awesome, and Noelle and I are already planning for next year! If you get a chance, seriously come to Anime Expo. It’s super affordable and so much fun for anyone, whether you’re a gaming fanatic or anime fan. I’ll just leave you all with this one more time… 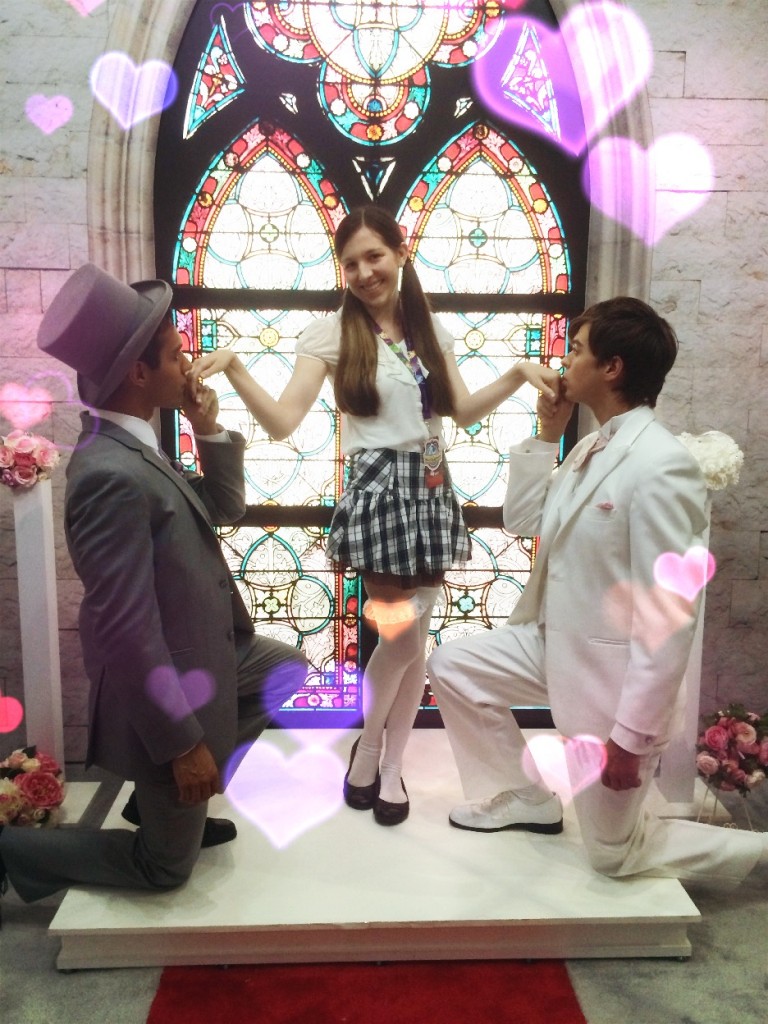 Yes, even YOU can have THIS.

…before I say fangirl out!

What the crap is up with game series' suddenly switching genres? If a game works well as a side-scrolling plat former, don't turn it in to a driving game. The big one that comes to mine is that stupid