It’s always interesting to get a glimpse into the past of games we’ve played, and Spewer is as good an example as any. Originally created in part by Ed McMulland, the same developer that went on to make Super Meat Boy, Spewer is a puzzle-platformer featuring a tiny science experiment with the power to projectile “spew” in order to propel itself around the various levels. While some may clench their gag reflexes at the thought of a game centered around vomiting, I would like to assure you that the game’s titular mechanic isn’t nearly as disgusting as it may sound; the “spew” is little more than green globs of goo that have little to no resemblance to an actual batch of tossed cookies. 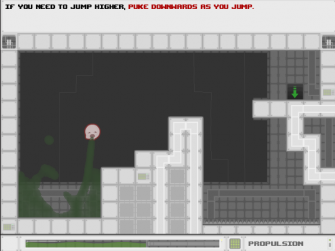 One of the basic functions of “spewing” is blasting yourself into the air.

Green goo isn’t the only type of goo you will be seeing either. For its puzzle-type mechanics, Spewer gives the player various pills that will change the type of projectile your little creature will create, from a more powerful propulsion to a floating, cloud-like substance that you can swim through as it hangs in the air. Figuring out where to send goop, how to spit it so that you can make jumps, and how to orient yourself so that you can swim through the various types without sinking and hitting spikes are the elements that make up most of the game’s 60 levels of challenge.

If you are familiar with the aforementioned Super Meat Boy, the controls of Spewer won’t be too much of a surprise for you, as Spewer works in mostly the same way (though scaled down a bit and with a wall jump replaced by the main mechanic). However, the famous pin-point-accurate controls of its commercial relative aren’t quite represented here. The worm character will bounce when hitting the ground, wrecking the flow of your timed jumps since you can’t jump while the landing animation plays. Additionally, one-block passageways that float in the air, as pictured below, are much more difficult to access than they should be. However, the latter of these complaints only comes up late game for the most part. 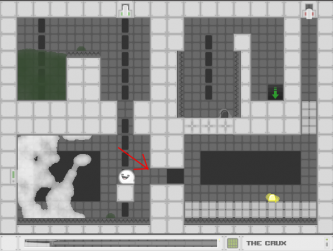 This hole is the hardest part of this late-game level.

Another control issue is dealing with the cloud-spew power-up. To put it bluntly, the mechanic is horribly frustrating. The cloud of white goo will move away from you as you move through it, meaning that a little slip up will often disperse the entire cloud and you will fall to the ground, not being able to regain the ammo as it floats tauntingly above your body-head.

However, aside from those few complaints, Spewer is a very fun puzzle-platforming experience. The mechanics of the spew are loose enough that every time you try a level feels fairly organic, but are reliable enough that if you’ve come up with a solution, then wacky, unpredictable physics aren’t going to be the reason for your downfall. There are also a lot of good twists on the gameplay, and the solutions to puzzles do not often feel homogeneous with only an increasing difficulty, but rather an evolution and combination of all the gameplay elements.

Spewer is certainly a game that should be tried out, especially if you were fond of Super Meat Boy. The frustrating bits are present but not overwhelming, and the game itself is free anyway, so if it’s not your cup of disturbingly greenish tea then there’s no shame in backing out. The game can be finished in one or two play sessions depending on your skills and available time. It’s a fun little experience to say the least, and a cool look into the past.

You can play Spewer for free here on Newgrounds, though be warned that it might run a little slow if you don’t block ads. I’d suggest trying it with ads first and then blocking them if it doesn’t work; they should still get your cents of ad money that way, which is a tiny price to pay for this experience. Alternatively, you can download it from the flash game onsite.

This game is an excellent example of what has become a rather predictable series.