While visual novels are still some sort of an oddity for Western audiences, they have started gaining some traction thanks to the Nintendo DS during the early 2000s—and, no other game of that genre turned out better for the system than Phoenix Wright: Ace Attorney. As this is the year the franchise is seeing unprecedented success, we should review some of its history so far:

Created after a rather strange idea for an adventure game—the kind of game that idea people (other than Peter Molyneux) would get fired for saying out loud—the Ace Attorney series eventually became the flagship of the genre to come out of Japan.

Phoenix Wright: Ace Attorney made its first appearance on the American market in 2005 for the Nintendo DS, putting you in the role of Phoenix Wright, a defense attorney straight out of law school. You’re tasked with the investigation of different murder cases, and you must look for clues that would help you prove your clients’ innocence in a fantasy world where the real killer could be everyone—even the victim—except for the murder suspect!

Although the game didn’t become a monster hit, the series received enough critical acclaim that it became a trilogy, which was recently re-released for the Nintendo 3DS. More evidence of the series’ success can be found in Ultimate Marvel vs. Capcom 3, where Phoenix himself can be found as one of the title’s playable fighters (an unprecedented honor given that 30-year old legendary mascot Mega Man didn’t make the cut). 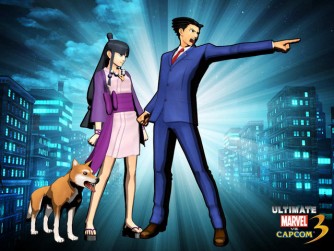 Objection! Zero is not Mega Man…ZERO IS NOT MEGA MAN!!!

But crossovers didn’t end there for Phoenix and Co.: its characters have a clash of investigative minds in Professor Layton vs. Phoenix Wright: Ace Attorney, once again gaining the game a lot of recognition and praised from critics around the globe.

And this year, the Ace Attorney series will reach its final achievement by releasing a prequel—and not just any kind of prequel, but an origins story dated way, way into the past where we’ll get to know the main characters’ ancestors back in Japan’s Meiji Era (1868-1912).

Getting a prequel or an origin story in a game series is only deserved by extremely popular games as evidenced in games like Yoshi’s Island, The Legend of Zelda: Ocarina of Time, and even recently Batman: Arkham Origins…so you know what this all means, right?

From this year on, the Ace Attorney series will be now considered a mainstream game!

Here on GameCola we are so happy to be one of the few websites that dedicated so much of its time discussing the Ace Attorney series, we’d like to think that the contributions found on our digital pages helped it to achieve this major success.

But now, it is time to move on. According to our site’s rule of thumb, GameCola is a website dedicated to Gaming Outside the Mainstream, and therefore—as much as it pains us—the Ace Attorney series will no longer be discussed on this site.

Today, it is my honor and duty to publicly thank both Michael Gray and Diana Gray (no relation) for their enthusiastic commentary on the series—and now we will have to ask them to start talking about other games they can openly discuss on this great website (you can ask Nathaniel if he wants to share Mega Man with you).

We also want to thank you all our readers for choosing GameCola as your primary source for Ace Attorney love throughout these years. We can only hope it finds even more success along the way…and you can still read all about it everywhere but here…on GameCola!

Strange news today, folks. As you may know, my Nancy Drew videos have gotten me a lot of attention from girls. Unfortunately, one of these girls has decided to YouTube-stalk me. She set up an accoun