If you ask people what their favorite digital video game distribution service is, chances are, they’ll say Steam. Despite offering games with digital rights management embedded, and nearly the same games as competitors like EA Origins, Valve’s Steam is always at the top, despite offering essentially the same service. Today, that may start to change with an announcement about content on the Steam Workshop, which has generally had more emphasis on “Work” than “Shop”. The workshop was a place to download user generated content such as custom maps for Portal and game modifications for Skyrim.

Very recently, it’s been announced that some software on the workshop will have a cost, at the discretion of the mod developer. I understand that a lot goes into making some mods, and mod developer is often a thankless job (except in some cases, like the Skyrim mod Falskaar‘s author getting a job at Bungie). Finally, the author of the HD horse genital mod for Skyrim can get his just-due $99 per download (unfortunately, this was taken down before I could get a screenshot). Just look at these other great hits. 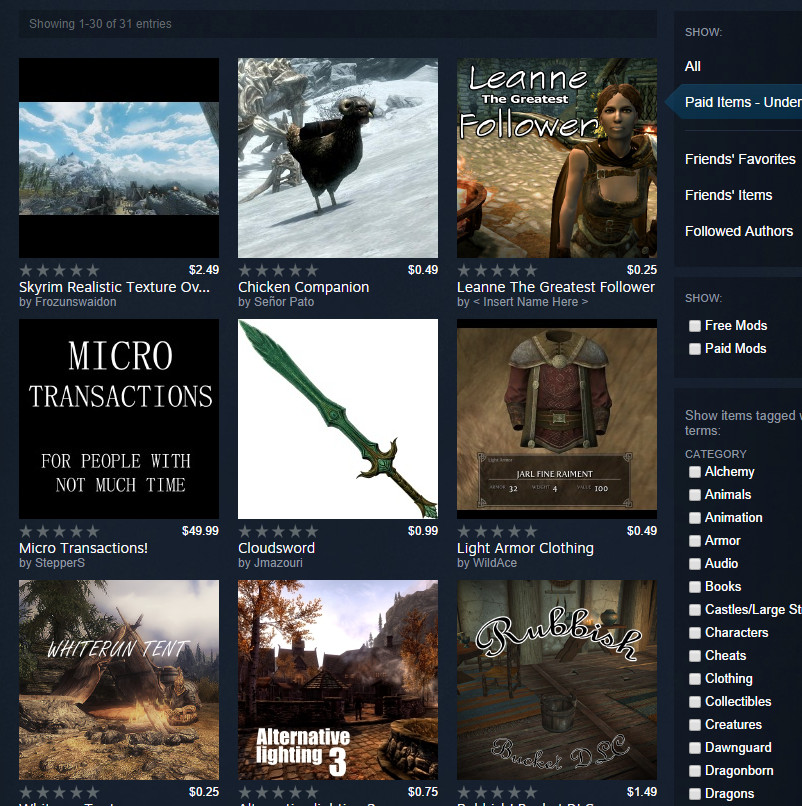 Some of these are clearly a joke, but some…I can’t tell. Why pay $0.25 for a tent? What’s particularly annoying is that some of the more popular mods, such as Wet & Cold, which adds temperature effects to the environment and character, now costs $5—and the free version will no longer be updated. Apparently, users who post in the Steam forums about Nexus Mods (the more common, completely free mod community) are having their profiles banned.

If I truly feel a mod is worthy of some of my coin, I would much prefer to use a donation button and have the money go directly to the developer. Why have some unknown percentage go back to Bethesda and Valve, and force the developer to only actually see the money after accumulating $100 in sales? Not to mention, the developer only gets 25% of the sale (minus taxes). 25% for doing all the work, and Steam just has to host the file. In fact, why even use the Steam Workshop if I can get everything I need (and more) off Nexus Mods?

The only advantage I see with the Workshop is that it really abstracts the user of some of the manual processes and third-party installers that are needed to install mods. Installing mods has never been super easy, and Workshop aims to ease some of that. But, now we’re going to have Steam putting their nose into all the mods and making sure they’re worthy of being on the store. Steam does say they’ll give you 24 hours to return the mod, but that’s often not enough time to get a full experience.

I have 62 mods installed in Skyrim right now. Some people use hundreds. Across Morrowind, Oblivion, and Skyrim, I probably have 200 mods. Let’s say each mod is $1 each. Would you pay $200 in mods for a box set you bought for $20? We’re talking about microtransaction DLC in full-scale PC games. Make it stop!!!!

No thanks, I’ll stick with Nexus Mods.

It's the Pokémon number! So we talked about Pokémon!