The WoW video heard round the world…the famous Leroy Jenkins video is ten years old today! My, how time flies. My, how old I now feel. Leeroy Jenkins is a tale of gung-ho World of Warcraft paladin who threw caution to the wind and attempted to single-handedly destroy a huge gaggle of nasties. 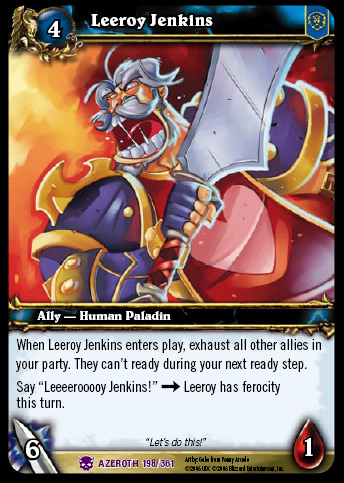 Upon closer inspection, WoW experts will see that Leeroy Jenkins is not really at fault here. The video was actually pre-planned, and is essentially an editorial on how some battles were just ridiculously difficult. I’ve never played WoW, so I’ll leave it to Reddit user Scarim who says:

“In this video it is not actually Leeroy that screws everybody over, it is all the other guys that fuck things up. All the stuff they plan while Leeroy is AFK is actually what goes wrong, not that Leeroy charges in there, Leeroy just ends up getting the blame. Using Intimidating Shout is wrong because it spreads out the whelps and make them hard to AoE. Using Divine Intervention is wrong because not only does it kill the paladin that uses it, it also locks the target (the mages) in an invulnerable bubble which prevents them from moving and casting spells. And the lead tank starts the encounter by running around and tripping over all the eggs. The video is a joking commentary on the complaints at this time that this encounter should be nerfed, because it was too hard for pickup groups.

TL;DR: Leeroy gets all the blame, but it wasn’t actually his fault. At least he still has chicken.”

Happy birthday, Leeroy! Sorry, I forgot to get you a cake. Well, at least I have chicken, right?

Indiana Jones is such a cool movie series. It opens with a whip crackin', wide-brimmed hat wearin', gun slingin' archaeologist who takes 25 minutes to swap around a small idol for a bag of sand. Come