When you think about playing an old game, what do you turn to? If you’re feeling low on potassium, you might boot up Donkey Kong Country. If you feel like having a tough adventure with the desert wind blowing through your hair, you might dig around for LucasArts’ Full Throttle. And if you’re feeling in the need of some comfort food, you could turn to the original three Mario games in any of their ports. We at GameCola, and most people over 20, have had at least some experience with classics like these, but what do you do if the only “gaming system” you have known all your life is a Wii, PS3, or your mom’s smartphone?

Often times, you might find yourself reminiscing about an old game, only to find it never got ported to any modern systems, usually because there are copyright issues or the owner of the game just doesn’t think there’s profitability for the game in today’s market. Of course there are PC emulators, even some ports of old games to mobile devices, but it’s usually a shadow of its former self. For instance, there’s an iPad “port” of Mega Man X. You might wonder “How in the Expletive can that be controlled? That masterpiece isn’t Fruit Ninja!”. Indeed, look up a playthrough on YouTube and you will likely be as revolted as I am. In fact, don’t even look it up, just take my word for it—it’s really that blasphemous. Anyhow, grumpiness aside, let’s think about that younger generation and their deficit of access to good content.

I’m not bagging on “new” games; indeed, I think a videogame hobby can be just as reward as reading for pleasure. When I started reading avidly, I was obsessed with the classics: 20,000 Leagues Under the Sea, The Call of the Wild, and so on. And where did I check those out? My local library. Where do people go when they want to check out classic games, let alone any games? Although the game rental business is seemingly dead, a lot of hallmarks of gaming can be found on the Virtual Console, Steam, PlayStation Network, and Xbox Live. But what happens when you want more than the most essential classics? Maybe something like the original Star Fox or Battletoads? Well, that’s one reason why there’s old-school gaming.

Retrogaming enthusiasm is climbing quicker than ever, but if we don’t steward older games to newer players in ways they can easily consume them, we risk more FlappyBirds happening. When Super Smash Bros. came out last Fall, I saw a 6-year-old boy pretending to be Kirby while his 9-year-old sister pretended be Captain Falcon. The demand for classic content is there in today’s kids, it just needs to get to them, and they can’t easily go down to Target with their mom and pick up a Super Nintendo. Thankfully, Nintendo realizes their IPs are hotter than ever, and the promise of mobile Nintendo games is real. 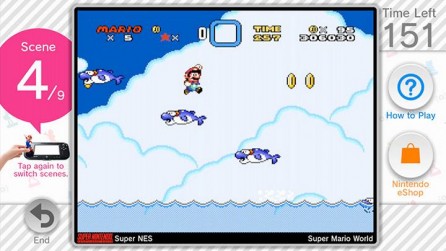 In the meantime, there’s amiibo tap: Nintendo’s Greatest Bits. On April 30th, Nintendo quietly dropped this free app on the eShop. You know those amiibo, selling to both hoarding adult collectors and young kids alike? Well, if you can’t afford another Wii U title with amiibo capability, this app can hold you over a little while. Like the short classic demos in Super Smash Bros. for Wii U, the touch of an amiibo unlocks a limited version of a Virtual Console game (as of now, only NES and SNES titles). You might think a Mario amiibo would unlock Super Mario World, right? Nope—instead, each amiibo gets attached to a Virtual Console title randomly, and then recognizes that amiibo as attached to that one title. My Link unlocked Super Metroid, and my Donkey Kong unlocked Super Mario World, so as Forrest Gump once said, “you never know what you’re going to get”.

Here’s the interesting part of these demos: Each title only allows you to play a limited number of scenes. Super Metroid had 8, while Super Mario World had 9. You can change scenes with another tap of your amiibo. You’d think this would feel limiting after a while, but I found a trick! In Super Mario World, I died in a level and was sent back to the world map, allowing me to play any level before the the scene that was selected. You could play a significant portion of the game this way, and for a 7-year-old with an amiibo who’s never played classic Mario, this could be a pretty important thing for them.

So far, only Super Mario World has this loophole, but I’ll keep my eye out for any others. Is amiibo tap an end-all solution to introducing the smartphone generation to classic games that have helped shape entertainment today? Hardly. It’s most likely Nintendo’s way of testing out how to bring their classics (and all of their games and characters) to mobile devices. Nintendo knows it has the hotcakes, and it’s about to serve them up. The prices for GameCubes may be going up, and people will always use emulators, but the golden oldies (and new goodies) are coming, it’s just a matter of how fast.

I will tell you this up front: I do not like Halloween. I do, however, need a topic for this edition of "Flash Flood," the column where I review Flash games and videogame-related Flash animations and