Imagine the most annoying kid you remember growing up. His name could have been Jimmy or Bobby, maybe even Louis. Then, remember the game Primal Rage? Take everything that was controversial, violent, or even scary about that game, and shrink it down to Mortal Kombat for the SNES, but still with dinosaurs. Then, for some godforsaken reason, throw in the board game Life, or maybe some weird rendition of Monopoly.

That’s probably the best description I can give of Jurassic Park III: Danger Zone. There’s one final thing though—it was made by Knowledge Adventure, the same company who made the JumpStart games. Towards the end of their relevant life, they were owned by Universal and made games for some of their franchises. Using their existing knowledge of “how much educational content can we cram into this game to get kids to learn, while toning down the very few violent parts to make it okay for mom?”. Yeah, there you go. The 3D game board, decent but not game-saving.

You start the game with a fairly well-done cutscene (aka Jay Jay the Jet Plane CGI), where you are immediately introduced to the most obnoxious narrator in the history of everything. Ever. There is no voice in any other media I have ever consumed yet that comes close to how grating this guy is. When I looked up this game to see if anyone else remembered it and found a YouTube video of it…oh my god. I was only able to sit through this game because my sister bore it with me, so be thankful, ‘Cola readers!

Anyhow, the plot of the game is that you’re a “Dino Defender”, which actually seems kind of cool from the initial graphics you’re shown, but then you arrive on Monopoly Hell Island after selecting one of the bad joke-named characters. There’s a character named Missy Link (gag me), and another named Farrah Fossil. Even as an 8-year-old I would chose her, just because I could hear the out-of-touch developers trying to be clever. The game pieces are Jeeps that rove around a decent-looking 3D game board, complete with small, repetitive dinosaur animations. Your goal is to land on “dart zone” squares, and dart the DNA (green for kid-friendly reasons) of a chosen dinosaur. This may seem easy at first, and if you’re lucky, it will be. However, there’s only THREE dart squares on the board, out of over 20 squares. You may play once, like my sister and I did, and somehow manage to land on those squares and then make it to a safe square, beating the game and earning a printable dinosaur picture. Others may not be so lucky. 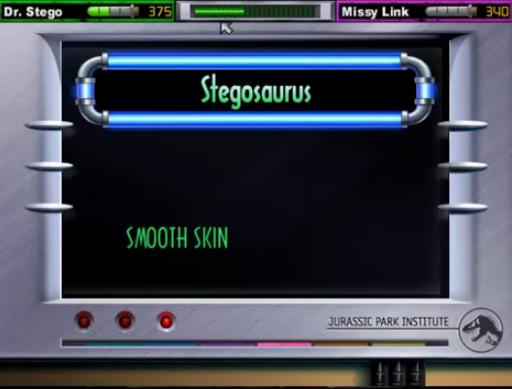 Feeling confident and only mildly irritated by the narrator (who can only be described as a blender that became a man that even the devil regretted making a deal with), you decide to play another game. You may miss some of the minigames and challenges you encounter upon landing on half of the squares, and you will think to yourself “how bad could Jurassic Park minigames be?”. Some are adequate. Just adequate. The others are broken, messy, buggy bores. The worst one requires you to hold down hot keys (remember those?) to activate an electric raptor fence, but the symbols to activate the fence go by too fast, or the game just hates you and the raptor will attack you just as you’re about to activate the last part of the fence. The other worst game is “Shh! T-Rex Extreme!”, where you have to dodge a T-Rex’s gaze as you maneuver behind trees to retrieve an item box. This minigame is extremely sensitive, as even being one pixel in the view of the T-Rex will send you to the hospital—which makes you miss turns until you buy yourself out.

The game also adds insult to injury by having hazard squares of quicksand, mud, and dino dung that your game piece will get stuck in. And you have to buy yourself out with either an acquired item or points. Ugh. If that’s not a dick move, having you automatically be sent to the hospital when you land on the mosquito swamp square without bug repellent is such a dick move that I had to mention it. You have to spend as much as half of your points to buy the bug spray (if you luckily land on the item shop square), just to be prepared for the possibility of one square. This game is sadistic. 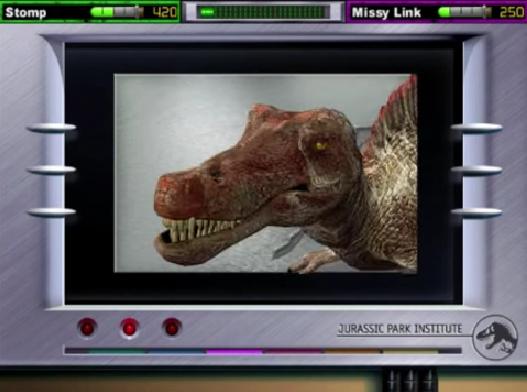 Even the prehistoric stars of this game are fed up.

Lastly though, let’s get back to that Primal Rage part. This is the one decent part of this whole game, because as a kid whose only other options at the time were MarioKart Super Circuit and Putt-Putt Goes to the Moon, this was cool stuff. It’s actually what Primal Rage might have looked like if it had made the jump to 3D, but with more accurately colored raptors. Just raptors, unfortunately. As you claw, headbutt, jump slash, and dodge, lightning will flash dramatically in the background of what looks like a nightmare sequence out of The Land Before Time. But this is Windows 98, remember? This was one of the very first games I bought that advertised it used QuickTime on the package, and there is predictable and unfortunate lag. After the first couple “Raging Raptors” bouts, my sister and I found the sections rendered nearly unplayable by the lag. Imagine the Super Smash Bros. Brawl online battles, but like four times as worse. Sigh, what a shame. However, those chunky QuickTime files also cause the narrator’s voice clips to be skippable sometimes, so that’s a small silver lining. 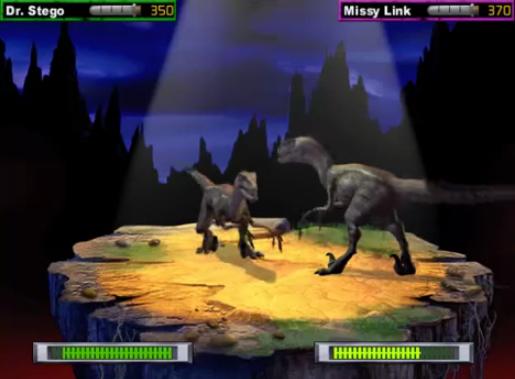 Cool as it is, that lag is killer.

To summarize, this game is every 8-year-old dinosaur fan child’s dream, which quickly goes into the “what fresh hell is this” category, leaving you with the feeling afterward of “there goes an hour and a half of my life I’ll never get back”. But, hey! At least the graphics are somewhat reminiscent of the movies, and that makes this game just barely playable. With our luck, this game will probably come back from the grave and wreak havoc on a new generation of kids for the iPad. If it does, it will be completely understandable if a parent throws the iPad out of the car window after the kids have been banging away at it in the backseat, just from that narrator alone.

Because Google is like one of those tricky genies that cheats you out of your wishes.