Whenever the topic of Wanderers from Ys comes up, there’s a memory that always pops into my head. It’s not some tender and poignant scene from the game. It’s not some great triumph or failure I encountered while playing. Really, it has little to do with the game itself. The memory that comes to mind is of my second grade journal, where I wrote about renting the game and included a drawing of the game’s overworld map.

While editing Nathaniel’s commentary on the first two games, I was inspired to hunt down the journals and post the results. I wasn’t prepared, however, for what lay within when I finally unearthed them:

And it wasn’t just Wanderers from Ys. Nearly a third of all entries in my journals were about “viteo games”. The entry above was literally the first entry in my “February 1993” journal from second grade. You can click here for concrete evidence. I even included a drawing on the next page that, looking at it out of context, took me forever to figure out…but I eventually realized was a crude representation of the my father handing me a cartridge of Rampart for the SNES. 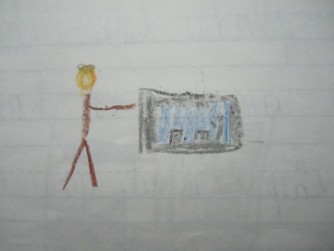 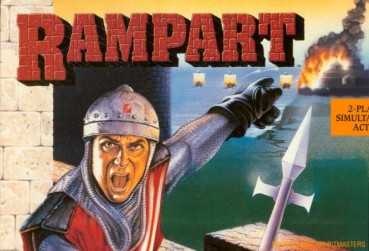 Just flip it turnways and simplify it to “castle walls and ocean”, and…yeah, that’s totally what it is.

Actually, it makes a lot more sense after seeing the entry from the next day. And, yes, before you ask: I wrote two days in a row about the classic SNES game Rampart:

A more accurate description of Rampart has likely never been written. It’s no wonder I ended up here on GameCola—I mean, honestly, where was Nintendo Power when I was seven? Why didn’t they hire me when I was in my prime? They missed out. Seriously, I even drew my own accompanying art. Writer and artist? That’s like two for one, here. 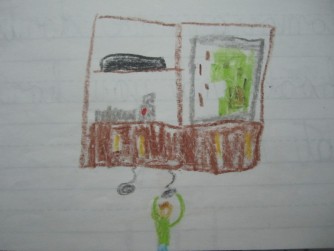 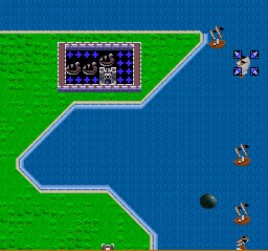 Aha! And, a few weeks after all this Rampart talk (with some commentary on visiting “tenusee” and other stories in-between), we get to the one that brought me here. My entry about Ys III, complete with world map: 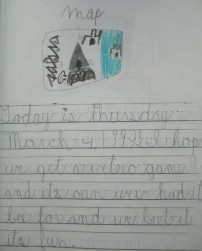 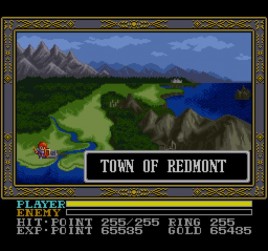 I hop we get a viteeo game and it’s oun wev had it bee for and we beet it it’s fun.

This makes sense. Ys III: Wanderers from Ys was released way back in January of 1992, so of course I’d be pining for the days of old-school RPGs by the time March of 1993 rolled around. I was already stuck in the early ’90s, and the early ’90s hadn’t even ended yet. As mentioned in the first entry in my journal, my dad would rent videogames from the store near where he worked whenever there was a three-day weekend (or whenever else). Was there something that had inspired me to write about this game in particular? Did my dad rent Ys III the next time he visited the shop? At this point, the world may never know. An entry from a couple weeks later doesn’t shed much light on the subject, either:

I hope I get teh games I want and we beet the games and it was hard and one time my dad hrt his nee but he stil got us one.

I would also like to note that that’s not a typo. I literally wrote “teh” in the original, hand-written copy. You can see for yourself, along with another drawing of our entertainment center. TV, VCR, SNES…everything’s all there.

This entry also talks about the time my dad injured his knee when an 8-inch floppy disk drive fell off a shelf at his job. Computer nerds these days have it easy. You don’t even need floppy drives anymore, much less ones that weigh like 20 pounds. And then, despite not having to go in to work that week, and despite his injuries, my dad drove all the way out to Rochester and picked up a game for us anyway. It’s no wonder that half of the non-videogame entries in my journals are about how cool my dad is and how I want to be just like him when I grow up. 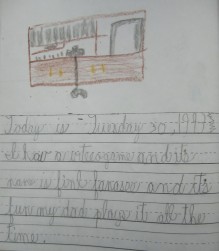 yesterday I had a nather teacher and we had her aluen time ago and yesterday the mist dragin was uto.

I hav a viteeogame and it’s name is finl fanasee and it’s fun my dad plays it all the time.

The next two videogame-releated entries I came across are about Final Fantasy II. In the first, there’s a line about how “the mist dragin was uto”. I’m still completely baffled as to how I managed to mangle “out” so terribly, and then just leave it there without rewriting it. Either way, the next entry was written the same day for some unknown reason, but comments on how my dad was also stuck in the early ’90s and was replaying “finl fanasee”. Like father like son, once again. Did he also repeatedly draw pictures of our entertainment center? I don’t think so, but maybe I should ask.

That was near the end of my second grade journals. My journals from third grade started about a year later, but there was little change in subject matter despite the time (and age) difference:

Some day I’d like to be a knight. Because I like adventrures, dragons, castles, and well everything.

Becoming a knight is still a dream of mine, but I’d have to quit my job as a web developer and pursue it full-time. I’m just not sure if the career change would be a worthwhile endeavor at this point. For those who may be wondering why I’d suddenly be talking about becoming a knight, a second entry a few weeks later starts to add some more details.

In ten years I’m going to make an airship. And I’ll be a knight. A friend will be a wizard or a knight.

Building an airship by the time I’m 18?! Talk about ambition! I’m sad to say that I’ve failed my younger self. I’ve yet to build any airships, and I never became a knight or had a friend who was a wizard (or a knight). However, the mention of airships and knights begins to make more sense when you consider the date. April 20th, 1994, would have been only a few weeks after the release of Final Fantasy III. I must have been so excited about the upcoming release that I wrote about it in the first entry in my journal, and then I wrote about it again after I got a chance to play it.

As an adult, I often have people question my nerd cred. I dress well, I don’t pay much attention to comic books or movies, and I don’t play many recent games. But I’d task anyone who wants to question my nerdity with finding stronger evidence than obsessively writing about viteogames in one’s second grade journal. And making Internet-class typos in handwritten entries. Man. Even at seven years old, I was ahead of my time.