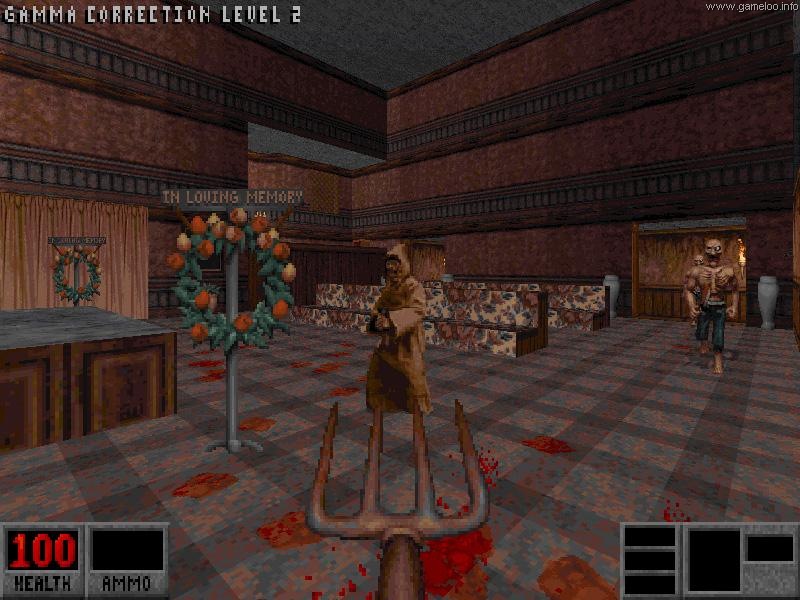 More like “one asshole eunich bloodsucker”, given my general opinion of this frustrating yet compelling quasi-classic FPS.

Late Self-Edit: Also, when I wrote this, I forgot I already did my dirge on how I was addicted to FPS for the last year.

Lazy Self-Edit: But I’m not changing it. 😀 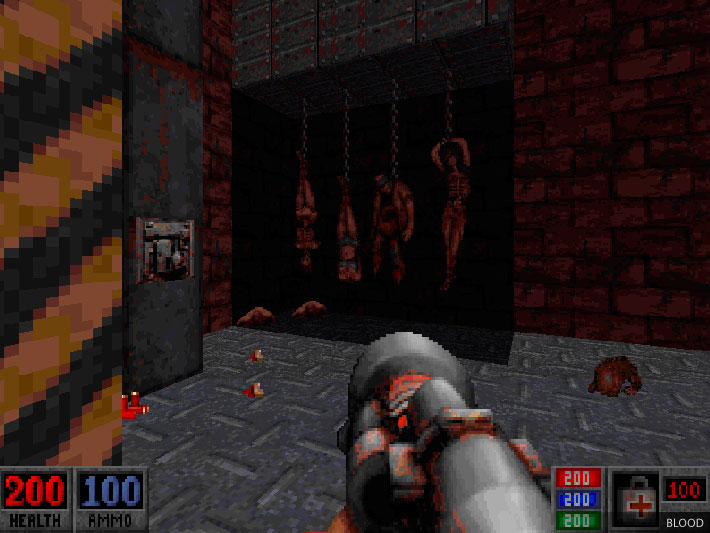 Over the last 15 months, I’ve become deeply infatuated with the late-’90s era of first-person shooters that I kinda missed out on. For much of my life, I thought the pinnacle of first-person shooting came from Doom and Doom 64. The thought of adding a Y-axis to the experience was like adding a bunch of orphans to the cross Jesus hung from—just adding more pain without adding anything to the experience (as soon as I completed this sentence, I felt something smack me in the back of the head while muttering something in Aramaic), but something compelled me to jump in and jump I did.

In my exploration for games that fit the Duke Nukem mold, I came across Blood, and oddly enough, I didn’t remember it from the late-’90s. This game is more horror than shooter—something that made Duke Nukem and Quake pale in comparison and even gave Doom, the parenting groups’ #2 terrorist on their war against maturity, a healthy competitor in the visceral Hell genre. You play Caleb, a resurrected gunslinger and prospective godslayer, as he fights against the cult he used to be a part of.

This game is actually a total conversion mod built off of the Duke Nukem 3D engine, but much has been done to set it apart from where it began. It retains an actual story of sorts (almost a blasphemous degree of plot progression from a time where you barely needed an excuse to rampage through 30 levels of gibs and shit), a totally different setting, completely different weapons, a more linear progression of the levels compared to the original, and not much else in common with the other BUILD FPS games other than its control scheme and occasional bits of humor. I imagine this game would’ve really stood out on its own despite being a total conversion, but I also imagine it never got beyond its meta (and punny) cult status for the same reason I can’t give it too high a score.

I really want to like this game, as it has EVERYTHING I want in an first-person shooter. The level designs and amount of detail for a late-’90s FPS are immaculate and something to study. From the large picture to the smallest and most obscure of its corners, the design of One Whole Unit Blood astounds me. The atmosphere is dark and gritty in an extraordinarily bleak way, and I genuinely feel in danger. I get a pretty…”unique” selection of weapons at my disposal, and the settings, gimmicks, and traps just keep coming. It even has a train level that has the odd distinction of really trying to make it feel like it’s moving even though you can easily tell it’s a static level—like some sort of stagecraft magic at a live play. This is definitely a game I want to keep going through, and there are so many levels and episodes to get through! 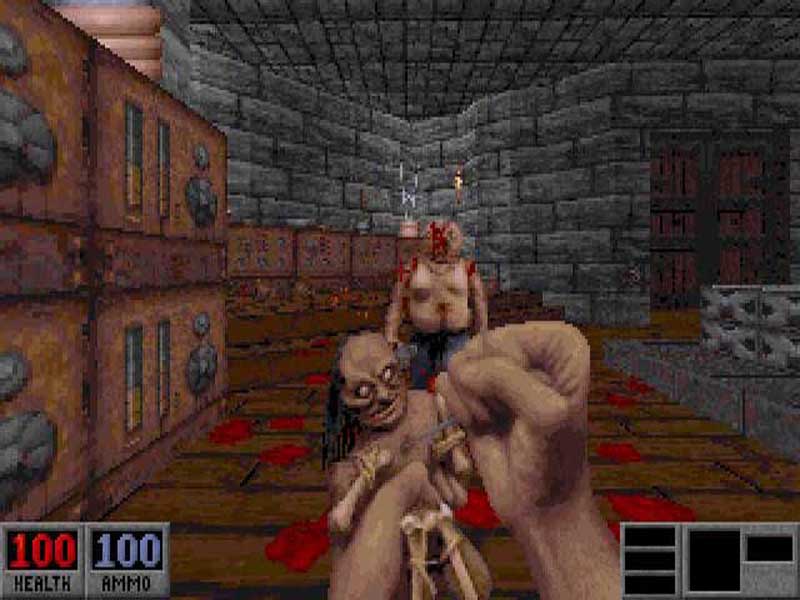 But WOW will that be a mighty task to accomplish, for this game’s difficulty is almost prohibitive, like a certain N64 FPS I reviewed years ago—and I know exactly why. It’s ridiculous to think the game falls so short of good for just one bad design flaw, but it does, and it’s the worst reason an FPS should fail.

Oh my god, what the hell were you guys thinking, making this game with such dangerous AI and weapons you can barely trust? I feel like fuckin’ Kevin McCallister (uhh, don’t read that sentence the wrong way). Unlike Doom, Quake, Turok, Duke Nukem, and many other successful FPS, this game does not have ONE weapon that you can ultimately depend on. Not one, and the reason for this is that the designers felt it was necessary to give almost each weapon a two-steps-forward, one-step-back approach and a serious dearth of ammo available to match up with the enemies you face.

I won’t bother going on. I even want to make my own mod for this game, importing the Duke Nukem weapons to see if that makes it better. You do get a secondary-firing option which lets the weapons perform some interesting attacks, but it doesn’t help nearly as much. You also find items that let you dual wield weapons, and THEN suddenly the weapons feel more useful, but for some reason you can only use it temporarily! Cheesy Petes!

And of course, the enemies in this game are REALLY on the ball. Even with armor, one unaccounted for enemy—even in the most basic one—can make short work of you. This cult is definitely not to be fucked with, and even the armor you get in the game seems to do nothing in actually protecting you.

I’ll give this game a 6 because it would easily be an 8 or 9 if it wasn’t for the borderline unfair difficulty and possibility I could import other weapons in somehow to balance it out. Otherwise, Blood is for the hardcore with little to do only.

Welcome to the Ten Reasons, where I discuss ten reasons why I like or dislike a game. This month, I'm discussing Mario Luigi: Superstar Saga for the GBA. I'm told that this is the first game to star