In the Edgewood Home for Lost Children there lived three children among many. Regan, with charisma that drew other children to her—none dared disobey her. Coneril, with power so great that other children could not match her—and none dared disobey her. And Cordy, who was so quiet and shy that none ever heard her say a word. One day their instructor, Mr. L, was called to the Administrative Office and left the three in control. Regan with her popular children, Coneril with her powerful children, and Cordy with those who were neither popular nor powerful. As the popular joked, the powerful sparred, and those who were neither merely huddled, it became apparent Mr. L would never return. So, Regan and Coneril signaled each other, and in one fell swoop eradicated the remainder. Except for Cordy, who had survived behind a fallen bookshelf, and discovered something: the power to talk. While strange, perhaps this story alludes to something more, perhaps to… 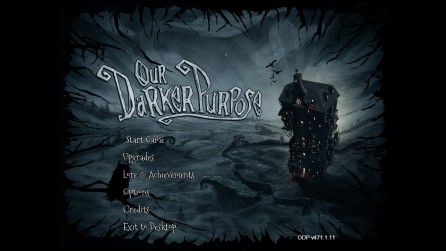 “What an odd story. It ends quickly and badly, I’m sure.”

Our Darker Purpose is an isometric roguelike in similar vein to The Binding of Isaac. The setting is the Edgewood Home for Lost Children, where children are abused by a mysterious “Administration”, and you’re one such child attempting to escape the system after facing abuse at the hands of your fellow students. You move with the WASD keys, aim and fire with the mouse, and use other parts of the keyboard to access mysterious special items.Visuals seem reminiscent of Tim Burton’s particular style of artistry, however the animation seems to take a cue from stop-motion paper dolls. 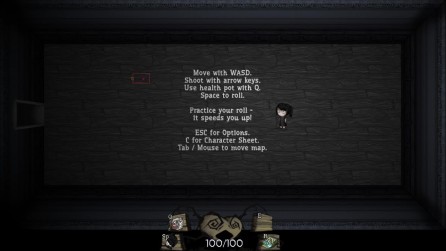 Though heavily inspired by The Binding of Isaac, Our Darker Purpose provides more complex mechanics such as a roll feature (which the game factors heavily into your success), persistent upgrades, and a branching level select where you can choose exactly how you’ll be defeated. Otherwise though, it plays similar to Binding of Isaac as an isometric roguelike where you’re trying to find the treasure, defeat the boss, and proceed to the next floor. Much like Binding of Isaac, the game gets longer each time you beat it, as more floors and enemies are unlocked. Where it changes is that Our Darker Purpose has persistent upgrades, allowing you to change your play style even before you start your playthrough, and an experience-based level up system that adds capabilities to your character alongside items. Each level also grades you based on your performance, and then rewards you based on that grade, with bosses having their own secondary goals alongside depleting their hit points. Our Darker Purpose is a finely-tuned isometric roguelike, improving upon the formula set by The Binding of Isaac, and adding twists of its own. 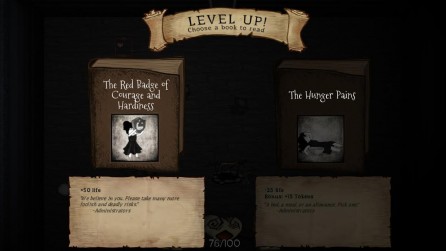 Fitting with the story and overall theme, the art of the game is rather dark and macabre. Like something out of Tim Burton’s sketchbook, the figures in the game possess a ghostly pallor and wide eyes. The animation looks like the movement of paper puppets, giving the whole game a feel like some movie inspired by Studio Laika. It’s a visual style I find interesting, and helps give character to the game that other roguelikes do not possess. The color pallet is subdued with few exceptions, giving emphasis to the game’s oppressive and bleak atmosphere. The art makes Our Darker Purpose a more interesting game, fitting the tone and theme of the game and emphasizing the creepy hopelessness of the worlds you explore and the situations you encounter. 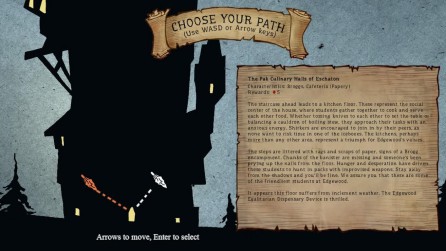 The story of Edgewood as told between levels.

The story is a something many people can relate to; one of an outcast that’s physically harmed by those who ostracized her. It’s a fantastic story about receiving abuse at the hands of your peers, then striking out and making a place for yourself outside of them. The enemies you face are visions of other students, lackeys of the bullies that seek to destroy you. The levels are places within Edgewood, each described with the purpose they serve as well as given a narrative reason for any possible modifiers (“Stronger enemies in general but less champions? That’s because there’s no social order here, the student body is in anarchy!”). Bosses represent Edgewood myths and urban legends, adding a level of detail to the story and setting. All of this spins together to create one detailed web of a story, which can be dark and creepy, but also full of humor and delight. 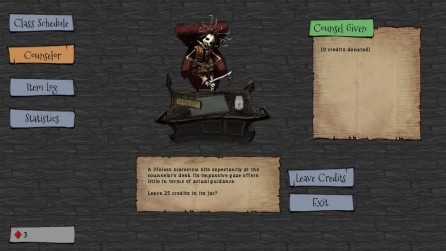 Persistent upgrades are available to change your play style.

However, the game is not without flaws. It does feel a little too samey, with the aforementioned obvious inspirations from The Binding of Isaac. As well, added mechanics are very flighty sometimes, with rolling requiring awkward timing to avoid attacks and items not entirely working as advertised. As well, there’s an assumption that you’re already playing after having unlocked a few persistent upgrades. Levels do begin to feel repetitive because, while they change in appearance, the art style still makes everything look like the same drab, faded rooms. It can be difficult to tell what’s an obstacle or a trap in rooms, resulting in trial and error to discover the functions of the features of a given area. These are hardly flaws that make the game unplayable, but they are flaws worth considering before paying full price for Our Darker Purpose. 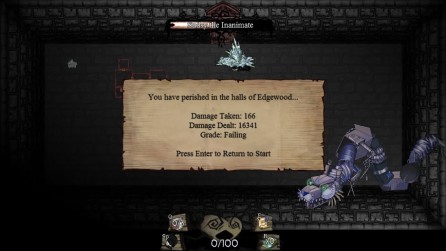 In all, the game’s pretty good! I wouldn’t personally pay full price for it, but if you’re looking for an isometric roguelike that isn’t The Binding of Isaac, this is not a bad title to get! The improvement upon the base of Binding of Isaac is worthwhile, though there’s elements that still feel flighty to me. It is still an action-packed roguelike with challenging and rewarding mechanics, though! 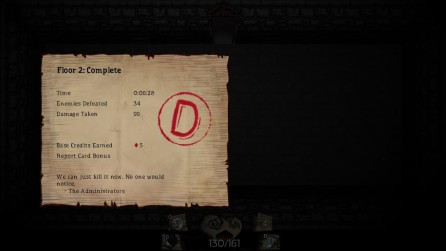 A few weeks ago, I conned my girlfriend into visiting New York City with me, where we could check out The Big Tree and The Skaters, do a little Christmas shopping, and, in general, just soak in the ho