You’re thrown to the floor, screaming in pain and agony. A man in medical scrubs asks you your name, and you reply with the only fragment you can remember, “Nilin.” He remarks that this is unusual, but not unfixable, and directs you to move down the corridor. People scream in the distance, robots fly overhead, and bodies line up for whatever process you’re scheduled for. As all this happens, a voice in your head tells you he (and he’s most certain he’s a he) is going to get you out of there. You soon see something horrifying happening at the end of the line, the screams coming from there. Soon, though, the room shifts into chaos as you make a break for a shutter. Being chased by security, you duck into a disposal shoot and enter a coffin. Drifting along the canals to parts unknown, no identity, and only a mysterious voice communicating through encrypted communication channels to guide you. 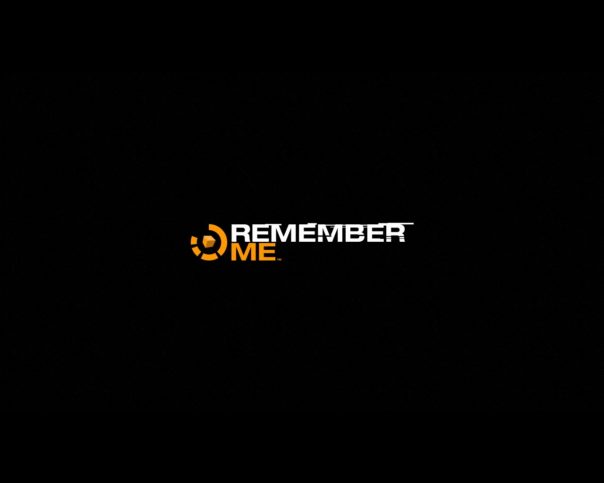 A plain title card for a story that’s anything but.

Remember Me is a game of an old genre—the beat-’em-up or brawler—remade for the modern day. You control Nilin, a terrorist and freedom fighter of the Errorist cause, in her fight against the oppressive Memorize corporation and its machinations for the people of Neo Paris and the world. Beautiful camera work, gorgeous 3D models, and stunning scenery lead you through what feels like classic cyberpunk literature. The story has you tossing and turning every chapter, wondering what’s right and wrong, and whether you’re on the right side the whole time. Meanwhile, a stunning soundtrack takes you through these emotional highs and lows, matching each major event in a most fantastic manner. The weak fighting system is almost forgotten, but unfortunately is the only means to this end. Remember Me is a memorable experience and you’ll want to ride it out through the end. 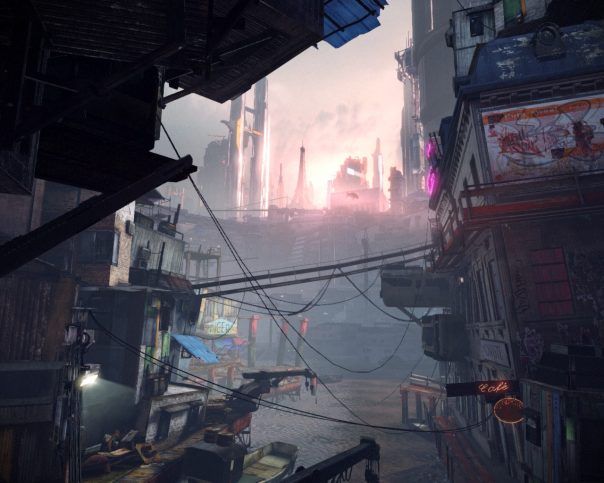 Beautiful scenes like these are frequent in the game, but you don’t get to fully explore the world before you.

Remember Me controls using WASD on the keyboard, the mouse, and some other keyboard placements. Your right and left mouse buttons are punches and kicks, which you alternate between to deliver devastating combos to the enemies. Dodging enemy attacks is essential, as is landing longer combo strings later in the game. There are several unique enemy types, though each chapter usually focuses on one or two, and they keep combat from getting stale. However, combat gets weaker and weaker as the game goes on and you’re expected to make use of not only combos, but the special abilities you gather. Many of these are not particularly fun to use, and only reward you by making the fights easier, while the added difficulty feels almost punishing. Targeting enemies is frustrating as well, with the camera defaulting to enemies that are closer to you and often ruining your combos because of this.

Outside of fights, the linear exploration is rather lackluster, guiding you on a parkour tour of a futuristic Paris. The puzzles range from simple to obtuse, with three puzzles only being solvable by analyzing the riddle-like thoughts of a nearly mindless antagonist. The actual “play” of the game is very weak, unfortunately, but there is something enjoyable about the fights. It doesn’t destroy the game, but sometimes you will want a level to end just so you can stop playing for a few minutes.

Story is where Remember Me shines through. Taking inspiration from the likes of cyberpunk classic Johnny Mnemonic and sci-fi classic Total Recall, the story starts with Errorist agent Nilin being busted out of a prison that apparently erases memories as part of sentencing. What emerges from that prologue chapter is a story that will envelope you. Uncertain if her actions are right, you’re forced to lead Nilin down the only path presented to her, a key part of the story being the manipulation and erasing of other characters’ memories.

This will leave the player wondering if they’re really doing the right thing or if Nilin is also a victim of the craft she practices. Worse, it often seems that Nilin has every right to be angry and lash out against a system that imprisoned and abused her, but this only adds to the doubt the player experiences. A fascinating dynamic accompanied by characters with a similar case of selective amnesia, all of Nilin’s allies either being brainwashed by her or having holes in their memory from association with the Errorist cause. Enemies include men turned to monsters by excessive memory modifications, brainwashed law enforcement officers, former friends, and abusive government officials.

There’s a constant theme of memories being intimate, and the modification of them is frequently likened to sexual assault. This makes for an intense, emotionally evocative story. The only problem is that, in the very end, it feels like DONTNOD Entertainment failed to follow through with this once the true antagonist reveals themselves. Until then, though, it is an emotional roller coaster that will take the player for quite the ride.

“This is for everything you’ve ever done to me, that I can’t remember.” One of many allusions to intimate assault made during the game. 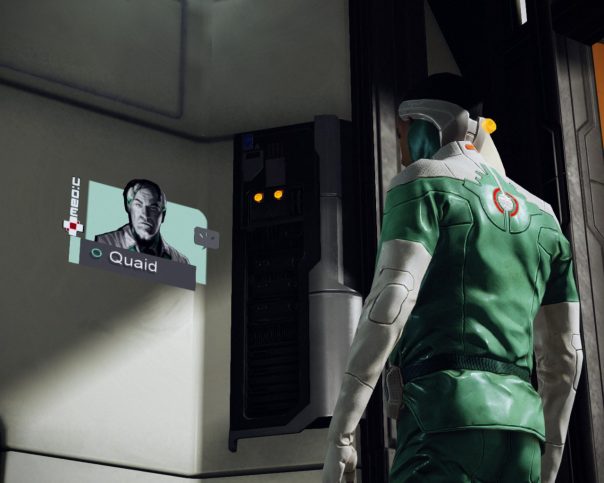 A doctor named Quaid, memories that can be extracted or implanted—it all sounds familiar.

The visuals are fantastic as well, especially given the age of the game. Despite being on the previous hardware generation, Remember Me is a beautiful and visually stunning game. The landscapes are breathtaking and impressive even despite the subdued colors. Often you’ll climb on top of a roof and get a look at the incredible city rendered before you. Combining elements of classic and modern architecture, the Neo Paris depicted in Remember Me is beautiful whether you’re in the slums, the wealthy districts, or cleared out canals. Even depressing and dismal prisons and maintenance tunnels have an art to them.

Nilin’s movements are fluid and beautiful as well; the fights are fantastic to watch, and seeing her reactions to the environment are fantastic. Nilin will flail when falling, shield herself from fire, and react to other environmental stimulus in real time. Character models are really top-notch, acting and feeling almost like living people. That said, the human models do touch a bit upon the Uncanny Valley—and while expressive, they often feel wrong. Remember Me is also guilty of recycling the same face and body multiple times, which may be expected with the engine but is still a disappointment given the advanced technologies we’re working with. Even so, it is still a visually stunning game, especially given how comparatively old it is. 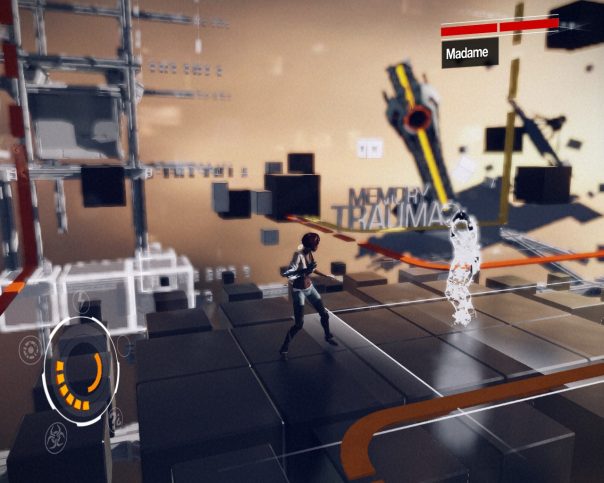 Even alien landscapes inside falsely constructed memories are beautiful in their own right.

The soundtrack is phenomenal as well, adding to the scenes you experience in a fantastic way. Perhaps traveling through the levels wouldn’t have meant anything if it weren’t for the music that played. The opening scene, as an example, is made all the more tragic by the despair-inducing track that plays. The rooftops feel more wondrous when you hear the start of that swooping score right before you’re about to see a new part of the city. Even the lack of music adds a certain atmosphere.

Tracks are sometimes repeated, and that can be a disappointment, but it also establishes a sort of leitmotif with the situations that the score accompanies. The only downside with it is that the music isn’t catchy—you won’t find yourself thinking about it outside of the game. While you’re playing, it frames your experiences quite nicely, however.

Representation is always a mixed bag, Kid Xmas is cool, but the evil albino trope is not.

Representation is always tricky for videogames, and Remember Me is no exception. Set in a futuristic Paris, you find yourself working alongside men and women of various ethnic types. In fact, two of the most powerful people in the game are not white, and are both women. However it is unfortunate that there’s little to no LGBT representation in the game, which probably doesn’t represent modern Paris’ population particularly well, and likely wouldn’t fit in with the future either. It’s a shame, but to be expected of a title backed by a AAA publisher like Capcom. In all, representation is a mixed bag with fair racial representation, but really skewed LGBT representation.

Some of the diverse members of this game’s cast.

And while the game sounds more or less fantastic, flaws are still everywhere. It feels more suited toward a console than a PC, for starters. The targeting in fights seems better suited toward a joystick than a mouse. Later boss fights feel very trial-and-error, forcing you to just try things until the tutorial hint pops up on the screen.

The story doesn’t quite deliver on the early mood and themes it introduces, and falls flat at the end. To build off of that, there are frequent themes of sexual assault, violations of trust and privacy, violation of one’s bodily autonomy, and so on throughout the story. The opening sequence is one penetration away from feeling like you’re watching Nilin’s sexaul assault. The visuals sometimes teeter along the Uncanny Valley, attempting to be too realistic—and the music is just a fleeting memory once you pop the game out. As well, there’s a short playtime involved. A little under twelve hours and I almost one hundred percented the game. These flaws are not substantial, but should be considered if you’re looking at buying the game.

Heavy themes are present through out this game, a strength and a weakness both.

Do I recommend Remember Me? It comes with some high regards. The story touches upon deep and emotional subjects, even if it fails to follow through. Music is fantastic when you experience it, and not every soundtrack needs to pop out of the game. The graphics are beautiful, especially given the game’s target console generation. I honestly think it’s a great game—one you should pay for—but probably better to wait for one of Steam’s infamous sales. 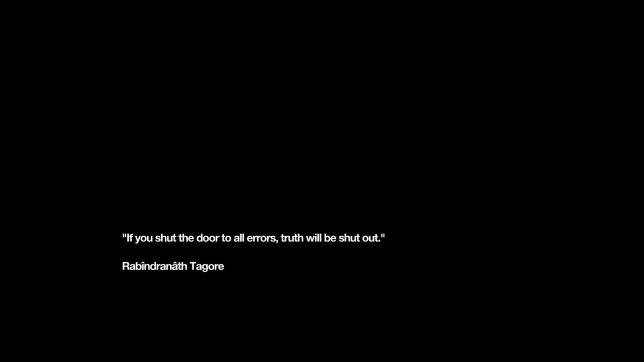