Hyper Light Drifter is the most fun I’ve had playing a game in a long time.

Some of you may remember Hyper Light Drifter from my article “Coming 2015: A Kickstarter Story“—and two and a half years after supporting the campaign, I can say that it was well worth the wait.

I’m really impressed by the gameplay. There’s obviously been a lot of time put into polishing battle, from the feel and flow of moving the character to the actual layout of each fight. The controls are precise and intuitive, which is necessary to keep up with the pace of the combat. Whether we’re talking about fending off waves of normal enemies, or learning the patterns to beat the huge bosses, there’s a level of skill and strategy involved in every fight. This leads to some challenging moments, but those only serve as encouragement to try harder—and the easy battles just give you a fun chance to show off your skills. 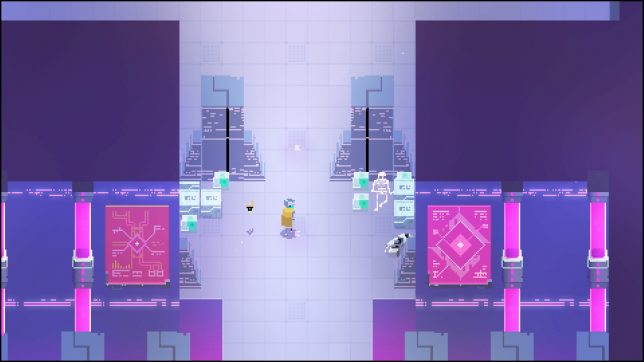 Skeletons…tons of health packs…I’ve played enough games to know where this is going.

At the same time, it’s funny to say so much about battle when a large part of the experience is just taking in the beautiful scenery. I wouldn’t necessarily say you spend a lot of time wandering around, but there are certain parts of the game that beg you to stop and stare for a while, or even to sit and enjoy to the music. Disasterpeace’s work adds its own touch to the game’s atmosphere, really compounding the existing feel.

Seriously, the atmosphere and aesthetic of the game is wonderful. The lineless pixel art works great, both in the cutscenes and in the design of the characters and bosses. And on the topic of design and aesthetic, had the game been on store shelves in the mid ’80s next to Crystalis and Phantasy Star, I feel like the characters and the world would have fit right in. Or, maybe it’s just the Nausicaa inspiration I’m sensing.

And, I haven’t even mentioned my favorite part of the game! Every map is full of secrets—hidden areas, things to find, optional content to complete. Having been raised on early games like Final Fantasy II or the original Legend of Zelda, I have this ingrained desire to walk into every wall, peek inside every pot, and inspect every tree standing on its own for some kind of treasure or hidden path. I feel like this aspect of design has slowly disappeared from RPGs and action-adventure games, but it’s here in full force with Hyper Light Drifter.

And, I mean full force. You can definitely make it through the game without needing to check every corner, but WHY WOULD YOU? Pretty much every time you look at a wall and go “hmmm”, you can expect it to be worth checking out. A health pack? Maybe. A key or a bonus outfit? Perhaps. Or better yet: one of the monoliths scattered throughout the game, or a bonus power module necessary for unlocking the extra section at the end of each region.

Then, after being proud of yourself for having found so many hidden areas, you’ll beat all four regions and realize how much you missed…but, that only gives you an excuse to go back through each region again, this time with a full set of weapons and special abilities. 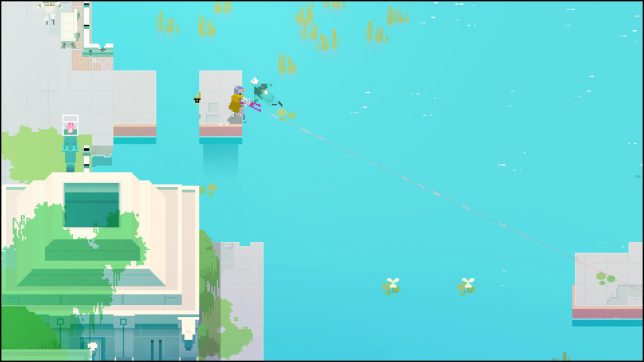 It’s right there…but, how do you get to it? And, what else is hiding over there?!

That said, it’s not a perfect game…

When I started playing the game, I said to myself, “Am I going to give this a 10? I feel like this is going to get a 10.” This feeling lasted through the first several hours of gameplay with only a minor hiccup here and there.

Towards the end of the game, however, various challenges start to pop up. Maybe if you don’t want to get 100%, you could give the game a 10. Being a completionist, though, there were a couple of challenges that upset me.

Seriously, is chaining 800 dashes even possible if you’re properly using the controller? Even if it is, is asking your players to (precisely) mash buttons for several minutes straight a good idea? Then there’s the battle arena. The battle system is fun, and I enjoy a good challenge, but completely random waves of monsters that could accidentally land you a full set of the most annoying normal monsters on the last round, making you start from scratch, is just a pain.

If I walk away from a game and only have two optional challenges to complain about, though, that’s really pretty good.

If there was one thing that did disappoint me, it was probably the story, to be honest. The introductory cutscenes really pull you in! There’s this vibrant world, with all sorts of tidbits to make you curious…what will we learn as we play?! Spoiler alert: It’s not much more than what you just saw. 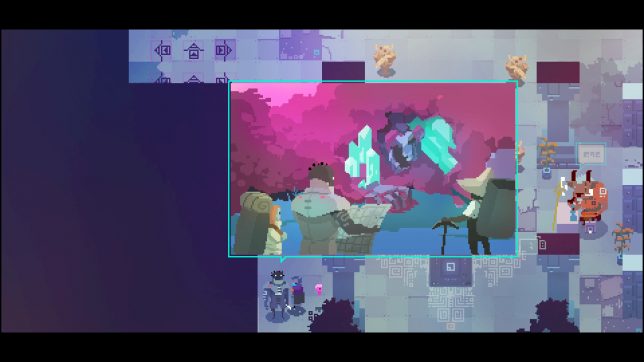 Not to say that there are no stories told…

There are definitely things to be seen, but they’re more of vignettes than any sort of detailed lore or expounded history. The game focuses more on the drifter’s journey and the plight of the individuals you meet, and while I did enjoy these little experiences and the wordless storytelling method, I was left wishing a bit more was said about the world.

I mean, there is some explanation if you really pay attention—or just Google “Hyper Light Drifter story analysis”. It’s just not quite what I was hoping for. As much as I could ask for some extra story, though, I just have to return to what I said above about the polished gameplay experience. Even if there wasn’t some grand, overarching tale, I was having too much fun to want to put down the controller.

Whether you’re looking for fast-paced action and challenging (but fair) gameplay, or if you just want to see a beautiful world and don’t mind putting in some effort to see it all, Hyper Light Drifter has a lot to offer. Putting together ’80s worldbuilding sentiments with modern gameplay, it was really an experience I’d been wanting for a very long time.

The Ominous Voice makes its final farewell in this tender and poignant edition of That's So Cliché.