You knew the pressure had to be enormous for Capcom as they started work on the next main Resident Evil title. Resident Evil 4 was nothing short of a revolution—one that deserves to be listed along the American Revolution, French Revolution, the yearly revolution of the planet, etc., and let’s face it, it was pretty much perfect.

How do you improve on perfection? 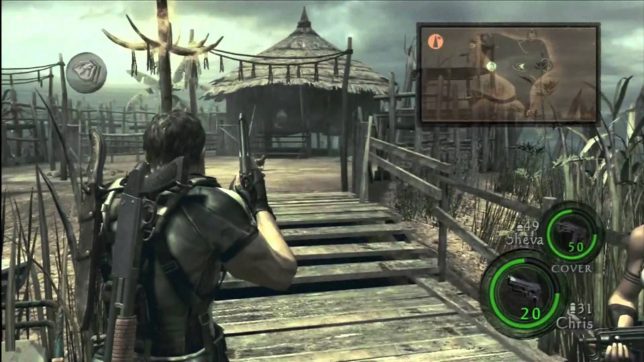 Well, when money’s on the line, you try your best anyway, and while Resident Evil 5 is not that improvement, its quality still proves the template worthy of its hype.

One of the reasons I got attracted to more modern gaming (after resisting it for like ten years) is that, by now, a lot of huge, multi-million dollar titles are available for bargain bin prices. Something that felt like a $300 gaming experience compared to what I was used to now cost $12.99 brand new. Some of that is how fast modern gaming moves. One AAA blockbuster right after another—every one of them gets its 3 weeks in the spotlight and then never again. Resident Evil 5 was seen, as I recall, as something of a disappointment. Even my brother Jackson, who is probably one of the biggest RE fans I know, summed up the game succinctly as “It’s awesome…for all the wrong reasons.”

Having played the game all the way through almost twice now, I can largely verify that summary. A lot of the game seems to be trying new stuff knowing that doing so is its only chance to not be seen as more of the same of Resident Evil 4, but so much of how this game works is strictly because it’s piggybacking off RE4‘s basic structure. The new setting—Africa—is about as far away from anything RE has done before, but it’s…I don’t know, not nearly as atmospheric at the same time. The story puts it squarely back into Resident Evil mythos with Chris Redfield, Umbrella and Wesker while also locking away story elements that have lasted more than 15 years, but the results are a bit lackluster for all that buildup, although I particularly enjoyed how it seems to be referencing Resident Evil 0 a lot more than the others. 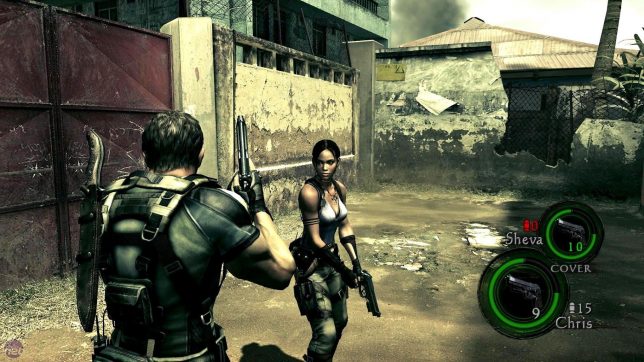 I’m trying to avoid making this review out to be “Meteo’s Dichotomy” because it IS a pretty fantastic and fun game with a lot of creativity and clever ways of making the most of the game’s structures. It’s still every bit as fun and mega high-quality as its predecessor is, it just had the misfortune of trying to follow that act and change up things it didn’t need to change.

Firstly, I’m not quite digging the new inventory system. I recognize that having two characters means you can’t have two big cases or whatever Leon was carrying in RE4 that held all his weapons, but this new system is as weird as RE has ever done. You get two 3×3 grids of inventory between your two characters, but pretty much every item takes up the same space; and with the way the game goes through action scenes, you get a lot of feast or famine. The feasts mean you run out of item space pretty quickly, and the famine means you really could’ve used those items when you’re facing a Chainsaw Majini or a horde of Lickers or in one of the game’s many gunfight sequences (which are actually pretty well utilized). You get to purchase armor in the game that can protect against bullets or melee attacks, but for some reason they actually take up space in your inventory. If you buy both, you now have only 7 spaces in your inventory. With all the other complex coding and interfaces going here, was it really necessary to stick the armor there?

It is helped slightly by the completely revamped shop/storage system, which is somehow even more bonkers than a set of item boxes that magically hold all the same items you drop in or a godly set of Cockney black market arms deals. Now, you simply enter a space that lets you buy what you need and put items away any time you start a new chapter set, begin your game, or die. On paper, it sounds awfully convenient, but in practice it just feels pretty weird. Additionally, you still can’t buy ammo (except for the Grenade Launcher)…but you can immediately buy guns you already acquire in the game? What? Even more obnoxious, the items you sell usually don’t give you much of anything unless you upgrade them to hell and back. The balance does work so it doesn’t make the game too easy, like RE4 had the tendency to do, but it’s still pretty weird.

Another thing you’ll want to know is that the major bosses in this game are fucking ENORMOUS. I thought Leon was facing some pretty insane odds in RE4, but they pale compared to what Chris and Sheva have to face, and almost all of them require some sort of gimmick to defeat. You can’t just shoot them all down anymore, you have to put them in positions where the special weapons provided will blow them away. I can’t believe Chris (or anyone, really) could face a crisis like this and live to tell about it, but his partner in the game, Sheva, is one of the most competent AI allies I’ve ever seen in videogames. There’s no escort missions with this lady; she’s the one who ends up saving your ass on several occasions. She largely takes care of herself and that’s one the game’s great accomplishments. 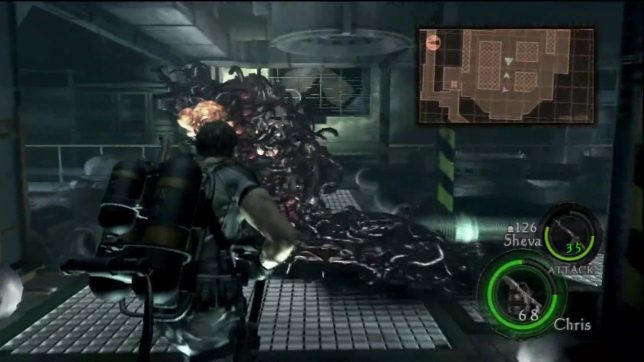 The core of the game is still pretty much as good as it was before, and by the time they were working on this title, the over-the-shoulder approach hadn’t worn itself out yet, so, really, this game should be in everyone’s possession unless they don’t have any consoles more modern than a PS2. It’s truly pretty excellent on its own merits and only suffers as a result of comparisons to RE4. If you’re any level of serious gamer, there’s no reason to not have this game in your library and you can get it cheaper than you can get a pizza (well, not Little Caesar’s, but anyway). It’s still meaty and well put-together and it’s about time we got to blast zombies and monsters in Africa for a change.

Tour guide: And coming up on your left, you can see this month’s issue of “testgame.exe: Making the Adventure”!