Former GameCola Editor in Chief Paul Franzen already did a review of Phoenix Wright: Ace Attorney proper soon after its American release in 2005, so this is decidedly not a review. Instead, I want to talk about the experience of playing the game, where I was in my life, and how it made me feel—if anything. Warning: this article includes spoilers! 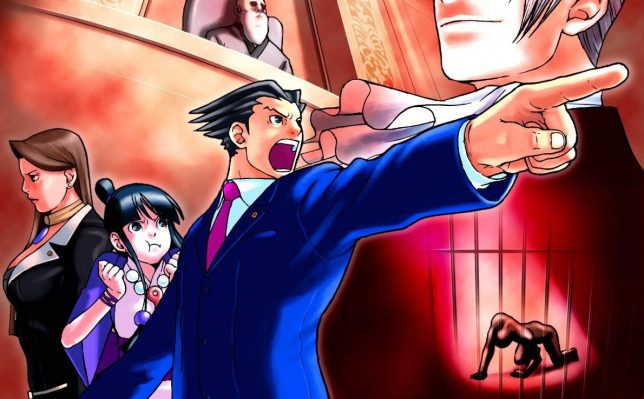 In 2010, I had yet to have a computer of my own; but being that most everyone except me was always busy, I mainly dominated the computer in our apartment’s sun room (which was a fancy way of saying “room with large window”). The DS was the only non-computer videogame platform I owned at the time, so naturally I’d look stuff up on the internet about DS games. Not only had I never seen Ace Attorney in a store, but I decidedly couldn’t stand “the way anime was drawn” at the time, so a cover like Ace Attorney‘s would have definitely put me off even if I had. Regardless, I kept hearing how great the game was, and without thinking much, a certain type of file and application download later had me playing the game—and to say the least, the first moments pulled me in. And before you worry: it was enough that I later paid for the game, and continue to support the series to this day.

The crime show-esque prologue going out of its way not to explain things; the typewriter ticking out the time and location; the suspenseful-yet-exciting Courtroom Lounge theme as you’re introduced to District Court Defense Lobby No. 2 and Phoenix Wright‘s main characters. From the titular character and Mia Fey, to the recurring characters Winston Payne, the tutorial prosecutor with a toad-like objection sound bite, and Larry Butz, Phoenix’s bumbling childhood friend.

Returning to the game just brought back memories of my first time playing the initial trial sequence. The relaxing theme instantly struck a chord with me and reminded me of both a courtroom with really good air conditioning, and the lazy Sunday evenings on which I typically played Ace Attorney. This is something I feel was lost in the newer court themes.

Ace Attorney is a great achievement in pacing. There’s a fantastic action/calm dynamic throughout the game and series in general. The courtroom segments are broken up by investigations, which are a little less intense as you can walk around, inspect the area, and talk to people freely. Just when that gets tiring, you’re thrown back in to the courtroom, where the dynamic goes a level deeper. Great alternation between getting down to the wire, running out of ammo, feeling like you’re a few steps away from losing, and totally laying it down on that smug prosecutor and putting the jerkish witness in their place. 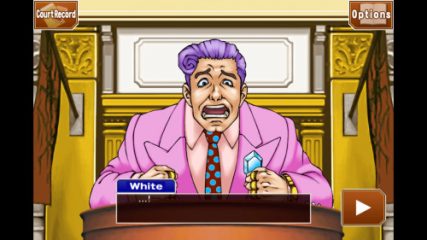 Possibly the best thing you could see at the height of Ace Attorney-induced anxiety.

Although Ace Attorney takes place over four cases (excluding the fifth, which was an add-in later and doesn’t do much for the main arc), the arc of the main characters transfers across and is fleshed out between them—the case story and the characters’ story work in service to each other, which is established right from the get go. Various callbacks to things like The Steel Samurai are present even entire games later.

After I finished what remains my favorite case—the second case in the first game, “Turnabout Sisters”—I put Ace Attorney down, despite how much I like it.

I then attempted to play through it multiple times, because I kept losing my saves. The initial save got lost, so then I played it on iOS. Then I did a factory reset and accidentally forgot I had a save to worry about. This kind of scene played out at least four times. But it did at least make me realize something: in an unexpected way, at least for me, Ace Attorney cases tend to hold their magic. The same anxiety tied to the suspenseful music when Redd White calls the police on you and punches you in the face ever remains. And I still hate Redd White with a burning passion. I didn’t even finish the original Ace Attorney until pretty recently.

So to me, it’s a pretty great example of how a simple videogame can tie memories together. I remember the lazy Sunday afternoons where I felt satisfied after getting Prosecutor Payne to wince back in 2010 just as fondly as I do the warm nights I spent last summer, feeling relieved I had finally toppled large dirtbag Manfred von Karma’s 40-year winning streak, and promptly heart-warmed after I got to see the “where are they now” style credits sequence.

And that, to me, is something special.

What did we ever do to you?