Throughout my time playing games—and really, through my entire life—there’s been a running theme of disconnect based on how old I am compared to the people I’ve talked to, who are often older than me. Various game-oriented conversations often include “Gosh, I’m so old”, and then a joke or two about how I’m basically still a newborn baby.

But when I talk about games with people that are older than me, there’s a recurring common experience that I seemingly lucked in to: memories of the classic Sonic games when you were young.

Most people had a Genesis when they were young, or their parents had an old one, etc. My slightly more interesting story is that my older brother had an original Xbox that we shared, and we went to a store to trade in some games and pick up new ones. We looked around and I was standing next to my mom. My brother held up the game and said, “She’d probably like this.” “Do want it?”, my mom turned to me and asked. “Sure,” was my burning answer. And just like that, we were going home, Sonic Mega Collection Plus in hand.

As it turns out, early Sonic games are pretty stimulating if you’re a kid. Vivid colors, fast-tempo music, quick-yet-forgiving gameplay that a child can deal with. I was largely bothered by Sonic as I could get to the end of Green Hill only to die due to the then-tricky boss fight. Yet, Sonic 2 became a fast favorite for the opposite reason. I could get past that, and it was quite satisfying and surprising to be able to. Of course, I died as soon as I got to the pink liquid in the first act of Chemical Plant, but still.

I think it’s one of those things that goes to show that a game doesn’t necessarily have to be unique to have nostalgia associated with it. Sure, the classic Sonic games were fresh at the time, but you know what I’m nostalgic for the most about this game? The menus. The title screen music that greeted me after I pushed the on button. 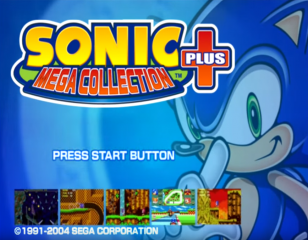 Even though when I was a small child I definitely had weird “Born in the wrong generation” garbage (I was younger than 10, OK?), I came to terms with the disconnect. I’m glad that I have such a mildly interesting story with the classic Sonic games.

And I think that’s pretty great.

Bonanza Bros. sticks closely to the early '90s game design bible, which states, “Thou shalt not burden thine audience with a story.”