Wow, I hadn’t reviewed this game already? Kinda strange as I was almost sure I had; but since, as of writing, I can’t find the list of games I was going to review and I hadn’t done this one yet, I might as well go for it. I must admit, trying to think up a funny or clever angle for this game review is proving more difficult and time-consuming than I want it to be, so I’ll just jump right in. Or perhaps what I just said is a sentiment felt by the development team themselves? I could try that maybe?

Nah, I should just jump in. 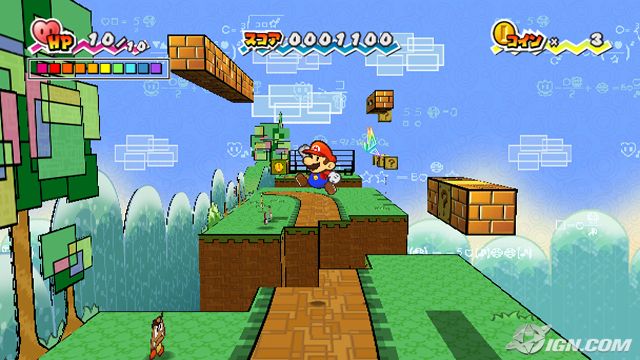 So, a quick history for those of you who, for whatever reason, totally blocked out the Paper Mario series—first came Super Mario RPG, and it remains the greatest thing ever made from two already awesome things that weren’t peanut butter and chocolate. Soon after, Square and Nintendo parted ways for quite some time, leaving a major hole in the hearts of gamers like me who hit their prime of VG enjoyment in those mid-’90s. Nintendo would not be deterred and continued on with not one, but TWO Mario RPG series—the Paper Mario series and the Mario and Luigi series. The latter I might suggest is the better of the two, but the Paper Mario series I like more for their accessibility and gimmicks. And of the Paper Mario series that I’ve played (1, most of 2, and this one), I like this one the most. It’s flawed and has a relatively low price for a Mario adventure game for a reason, but it’s still worth a place on your shelf, and in so many labored fucking words, I’ll tell you why.

Paper Mario relies on the gimmick that Paper and the world he comes from is somehow paper and 3D at the same time. The first two games ran with it as an RPG with turn-based combat and the like, but this game turns it back into a quasi-platforming vessel for the Mario characters to act in. Even more than that, this game finally realized it had a weird 2D-in-3D thing going and decided to turn the entire game on that premise, and so we have a Mario game where the main objective in moving forward is twisting the levels and surrounding areas from 2D to 3D—literally! In this game, you had the really high-concept power of turning every environment you can play through from 2D to a three-dimensional plane that expands the level and most of its elements to find things behind things, things in front of other things, things on top of other things, and other things.

I feel that my mediocre description of the core gameplay doesn’t accurately describe what’s going on, but trust me, it’s a perfectly “Mario” thing to do. And it’s a genius idea, too, but one that either looked better on paper than in practice (pun maliciously intended) or one that wasn’t executed to its full brilliance for whatever reason. Putting both this mechanic in place as well as taking out RPG elements and making it a platformer feels like a double-edged sword—it works and it wrongs for some of the same reasons.

Before that, let’s dive into the story. Mario and some crew get sucked into yet another strange neighboring world requiring them to find seven more plot coupons to stop another villain more competent than Bowser from destroying the world. This game allows you more than just Mario this time, and your assistants are pretty much living tools as opposed to a gang of sidekicks like the first two Paper Marios. Without spoiling it too far, you get Mario, Luigi, Peach, AND Bowser to play as this time around, in addition to those tools, and each person gets a small set of skills to differentiate them and make them important for getting through what you need to get through. The game and its environments are far more…spacey/futuristic(?) than previous games, which I personally love as ever since Super Mario World and Mario Kart, I felt their occasional divergence into spacey/futuristic elements was one of my favorite things, and it does well to really set itself apart from its predecessors. Still, the plot itself is still so Nintendo-mandated standard that it seems the writers are just as tired of it as we are…well, more on that a bit later. 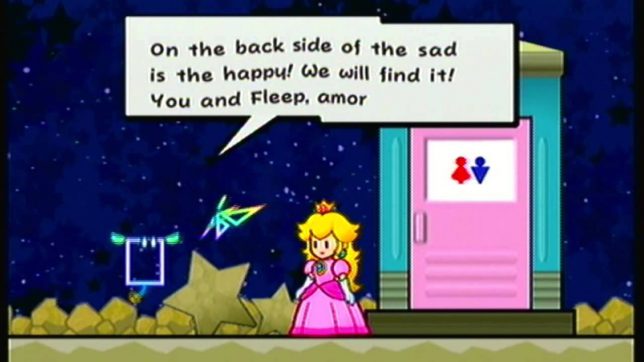 This game from startup is very attractive and artistically appealing, with a nice, mellow attitude that still has some sharpness to keep me interested in going on, and it also has a much better soundtrack than previous Paper Marios, although a shallowness begins at roughly the same time. One of the big reasons this game isn’t higher on the registers of Wii collectors and fans is that the game has a strikingly low difficulty and such a…I don’t know how else to describe it, but it has SUCH a smooth ride that I suspect Nintendo actually lubricated the track to get me in and out as fast as possible. It feels like there’s no real MEAT to the game. Something in the middle is hollowed out and missing. I’m not sure how a game that literally straddles second and third dimensions could still, and I’ll use the pun again, feel flat as paper, but this game manages it all the same.

And the thing I hate most, which really makes the additional characters feel pointless to have in the first place, is that for some reason, only Mario can actually make the switch from two dimensions to three—and for some reason there’s a time limit on it! That makes no sense at all. And from there you end up using Mario most of the time, Bowser for the bosses (thanks to his absolutely broken attacks), and Luigi and Peach only when the obstacles in the stage call for it. It’s like, can’t you make it so Mario can go 3D full time and the other characters have the time limit? That’d make this so much more balanced.

That’s not to say the game isn’t worth the somewhat startlingly short play time it has to it (about 20 hours all said and done, including a bunch of side stuff), and it’s also not to say Nintendo didn’t TRY to pad the experience out with some rather pointless but still fun side excursions with optional dungeons, mini-games, and a butt-load of hidden stuff you don’t really need but might as well look for since you’re here. Maybe I’m expecting too much—the game IS a platformer and not an RPG after all, and 20 hours for a platformer is still not bad, but the low difficulty just takes so much of the experience out that I question who Nintendo really made this game for. It’s too high-concept and well-written for the younger crowd, yet I can only see Mario newbs actually having much trouble. 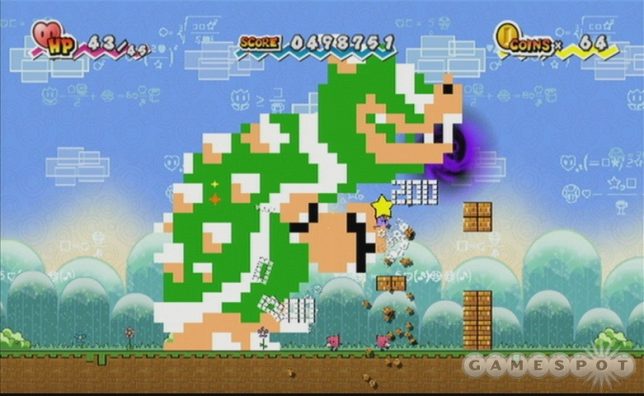 The key to enjoying this game is appreciating its creativity. The gameplay, sadly for a Mario game, comes second to that, but at least it tries. One chapter changes the gameplay to a space shooter-inspired affair. Another chapter is completely devoted to some weird modernized 8-bit hybrid design. You get stars that allow you to rampage through sections of the level as a giant 8-bit version of yourself (which is obviously a huge nod to New Super Mario Bros for the DS, but I don’t get why exactly) and some of the more entertaining villains of the expanded Mario universe. As a matter of fact, if anything starts showing some depth in this game…well, would you be surprised if it was the game’s story? Yeah, that’s kinda why I broke off from talking about it earlier. I won’t spoil anything, but after the midpoint of the game, it starts…subverting your expectations…and it’s one of the best-executed of its kind I can remember.

Were it not for that, I might give this game a 7 or 7.5 out of 10, as even if the game is shallow and a thinly veiled appetizer for a real Mario game (Galaxy), it’s still fun and very memorable. The surprise depth of story helps carry it over to a solid 8.

You can find this game for under $20 now, so go do it. Just don’t expect too much out of it and you won’t be disappointed.