I’m kind of sad I didn’t have a chance to play this game sooner. Knowing how much I enjoyed Crystalis, and given my childhood ability to endure painful gameplay, I feel like I really would have enjoyed it. I actually remember reading about this game in Nintendo Power back in the day. I have a specific memory of seeing it and thinking it looked stupid. Wurm is really a game that I want to like—there’s so much going on! Anime-style cutscenes? Almost every gameplay style ever seen on the NES? A story to surpass Crystalis?! Alright, maybe not quite, but it was really trying.

The story is what pulls you in. Don’t let the title fool you; the only thing the game shares with Jules Verne’s Journey to the Center of the Earth is that the characters are, in fact, underground. Wurm depicts the future year 1999 in which humanity, threatened by wild earthquakes and volcanic eruptions, sends explorers below the surface of the Earth, only to come across literally every ancient civilization mentioned in classical literature. Atlantis? It has to! Lemuria? You bet. Mu? Of course! Nonmalta? Wait, what? I mean, I guess…if you consider Ultraman to be “classical literature”. Dinamur? Alright, now you’re just making stuff up.

No spoilers, but things get pretty wild. There’s mystery, adventure, romance, tragedy…everything you could want in a poorly-translated NES game! A green-haired anime girl in bikini armor kisses a guy whose brain was removed—in the future! IN THE PAST. Alright, that was a bit of a spoiler, but don’t worry about it. 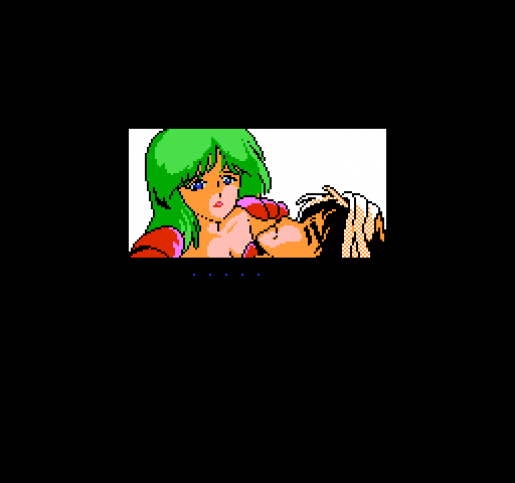 You didn’t think I was kidding, did you?

Sadly, the story is the only interesting part. It seems like there was a fad on the NES of games having multiple styles of gameplay. Instead of coming up with new game ideas, or polishing up one type of gameplay and doing it well, developers would just cram a bunch of different styles of gameplay into one cartridge. Wurm goes all the way with this strategy, only missing maybe puzzles and turn-based battle.

Each “Act” runs through basically every type of gameplay available at the time:

… And none of these segments are really that good on their own. Instead of having a solid amount of play in each, you’re just getting into the swing of the weird transforming flying drill ship thing when you get thrown into platformer adventure mode after watching Moby sexily exit the ship. No, no—not that Moby. The green-haired anime girl is named Moby.

I hope you like this scene, because you see it again every few minutes.

While the next segment technically involves platforming, it’s rare for there to be more than one platform involved at any given time. The action, similarly, is restricted to occasionally knocking out bats and jumpy Nonmaltas using your gun or high kicks. The levels are non-linear and there are items to find and NPCs with whom to converse, but I still have trouble with the “adventure” classification based on the sheer fact that the levels take maybe two minutes to clear if you really go out of your way to see everything.

Part of me wonders if you could skip all the plot and backstory by running straight to the end of the level without getting any of the items or talking to anybody, but that would require me to play the game again, and I really think one time was enough for me.

After an extremely brief walk around the level, talking to subterranean royalty and finding ancient artifacts, you fight a “miniboss” that just kind of jumps around for maybe ten seconds and then disappears. I don’t think my shooting or sexily kicking him did anything, honestly. On one level, I just went through the exit and it let me leave without fighting. 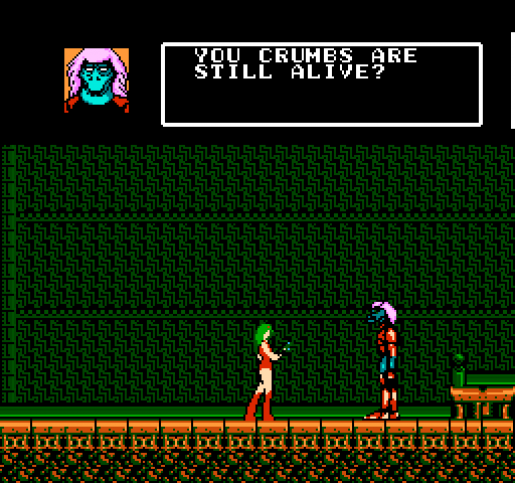 But not before the miniboss called me a crumb.

Then there’s another cutscene and you go to the vertical flying segment. Which exists. That’s about all I can say about that one.

The one kind of cool segment is the “first-person” boss fight at the end of each Act. Maybe if it had some more polish, it would have been fun…instead, it was just confusing. You alternate between talking to your crew and fighting the boss, both of which build up your “POSSIBILITY”, which needs to get to 100% before you can win.

It wasn’t until halfway through the game that I realized you’re not actually supposed to interact with the boss during the fight. When it looks like they’re about to attack, don’t stand there and shoot! You have to “dodge” by turning left or right before the attack lands. Trying to fight back will just get you killed, so it’s more effective to just spin in a circle until you can talk to your friends again to raise your POSSIBILITY. It’s basically pointless to shoot until you hit 100%. 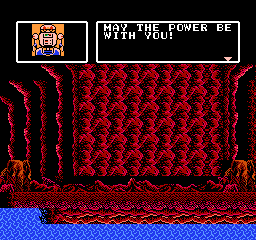 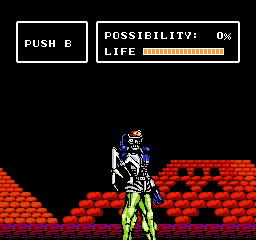 The entire game is really pretty short. I don’t think it took me an hour to play through, and a decent part of that was trying to figure out the controls. Most of the game’s difficulty comes from not understanding what you’re supposed to be doing, and after that it becomes super short and easy.

I have to give it some credit for having cool animated cutscenes on the NES, though. It’s not exactly Ninja Gaiden-level, but I applaud the effort. The story also suffers from technical limitations and translation issues, but I feel like I would have really enjoyed it if I’d played it at release.

If anything, what gets me the most about the game is the weird indie game vibe I get from it. Retro graphics? Overblown story? Unpolished gameplay ripped off from other games? If there was an hour-long Kickstarter backer list in the credits, I would have thought this game came out this year.

And like so many indie games I’ve played, I want to like this game…but it’s honestly just not very good. Sorry, guys. I hope you went on to bigger and better things, but how did this even get on the NES, much less translated and published in America? 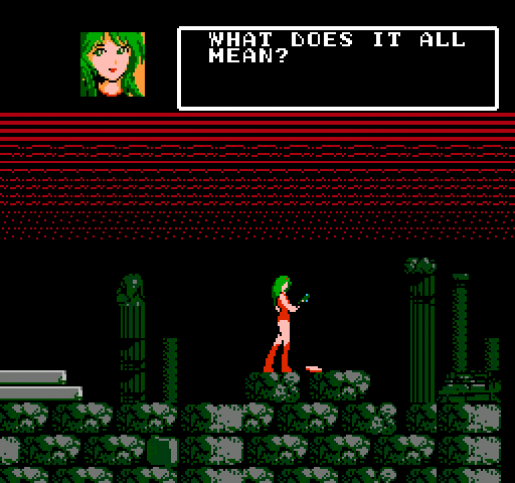 I feel the same way, Moby. I feel exactly the same.

Despite the NSFW tag, this review contains surprisingly few puns about the game's name.