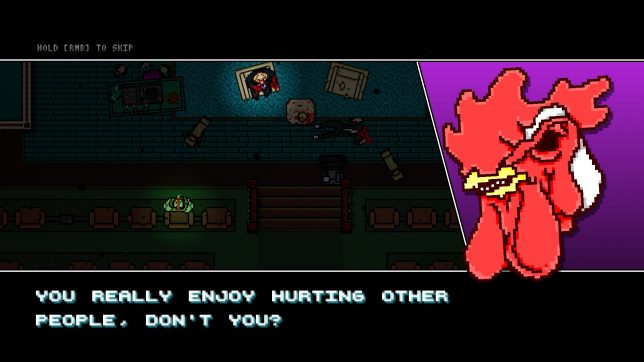 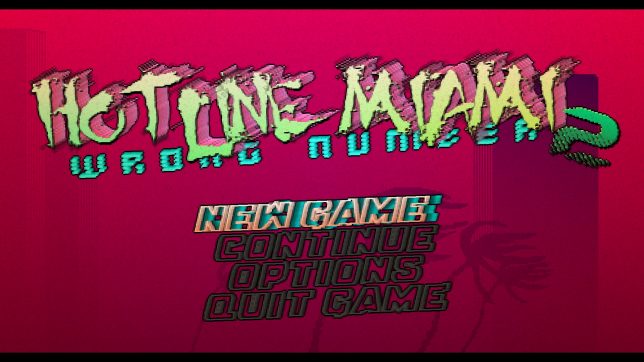 Hotline Miami 2: Wrong Number is the sequel to the indie hit Hotline Miami. Much like the previous game, it’s an isometric 2D puzzle game where the puzzles are murdering everyone in the level. It plays deceptively like the previous game, but you’re also introduced to advanced game mechanics with the very first mission. Like the original, the game features a visceral soundtrack that almost expertly matches the action, as well as a retro, yet violent, sprite-based art style reminiscent of classic Grand Theft Auto.

Unlike the original, Wrong Number features a well-crafted, almost crystal-clear story that follows six arcs to completion. In many ways, it is an upgrade of the previous game, and that is true. At the same time, it feels very much like this content should have been in the first game as well. Equally enthusiastic and disappointed, I found much to be joyful and dismayed about in Hotline Miami 2.

Much as things change, they stay the same. New characters, with new fighting styles, mixed with old aesthetic, and mechanics.

The familiar control scheme returns from the first game, with few changes in the second. Moving with WASD, attacking and interacting with the mouse buttons, shift to extend vision, and sometimes the spacebar does something. It’s a simple formula that works, until you put special abilities into the mix. Unlike Hotline Miami, its sequel starts you off with character powers to learn, and you’re expected to be familiar with the mechanics of the game to start with.

Levels are constructed around the assumption that you’re playing a certain way, usually following the unlocking of new characters. Some characters play wildly different, too—attack speeds and weapon choices varying greatly between many of them. Sometimes this makes for a very fun experience, and sometimes a level feels like tedium because of it. Some characters lack the flexibility that the game seems to be built upon, while more flexible characters are often in hellishly difficult levels. Some of the new characters are really fun to play, while others feature altered mechanics. While the base gameplay is indeed the same style, this sequel does build upon the core mechanics of the previous game. 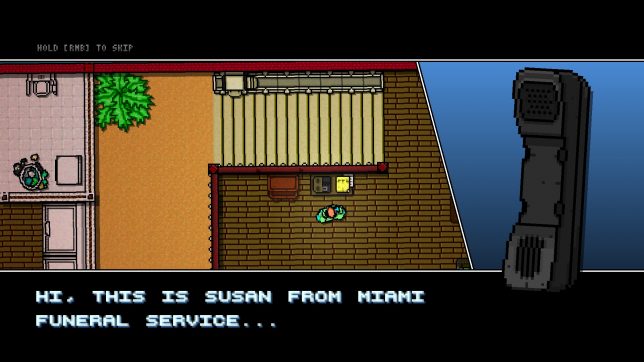 Phone calls don’t play as important a role this time around.

Initially, pulsing techno guides you through the first few murder-filled stages; much like its predecessor, Hotline Miami 2 features a soundtrack that drives you through the mayhem. Once more, though, there are improvements upon the previous game’s musical score. No longer merely pulsing ’80s-inspired electronica, the music takes on a wider variety. The opening is a melancholic tune, and many missions feature drastic shifts in tone conveyed through the music. The classics are still there: the record scratch and dead tone that signal a mission’s end, as well as the jingle that plays as your score is tallied up. More memorable tunes have been added on top of those, and many drive you through the haze of blood and violence like in the first game. Some, however, are brooding songs meant to make you actually think about what you’re doing. 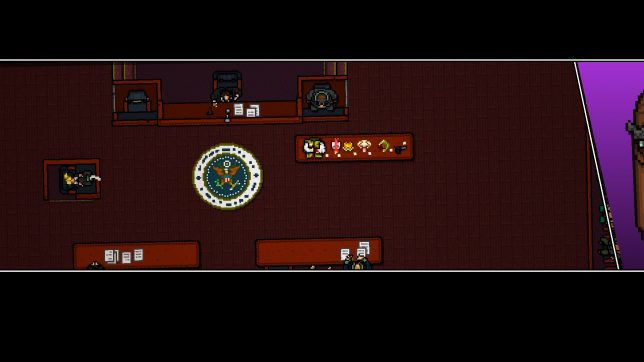 The ending of the first game is not fully canonized, despite how this may look.

Visuals still remain very true to the original, but with greater variety overall. Greater variety in enemies, weapons, scenes, characters, and of course the violence committed through all of these can be expected. The first game, once considered a game of unparalleled pixelated gore, has been one-upped by the many disgusting methods of death the new game provides. Weapon variety has increased with the higher visual quality, adding to the number of ways one can dismember and murder the various enemies throughout the stages. New levels allow for an impressive variety of stages and locations than what was previously seen. Perhaps most impressive would be the character assets—new sprites in this game give a variety in characters, enemies, and NPCs that the previous game was missing. Wrong Number shows off that pixel art can still be a beautiful and expressive aesthetic for videogames.

Each of the stories intersects in their own ways.

The story is the element where the game shines. All aspects of the sequel outshine its forebear—especially in the infamous history its based off of. The original Hotline Miami was based around Cocaine Cowboys, a documentary detailing the drug wars that happened Miami in the ’80s. Hotline Miami 2: Wrong Number goes a step beyond, also crafting a fictitious war between Russia and the United States, resulting in the bombing of a densely populated civilian center, the United States being turned into a puppet state, and perhaps even political details further along this alternate history.

Beyond that, there’s a tale woven of a team of serial killers copying the events of the first game, a movie stylizing the events of the first game, and a man trying to piece together what happened (and why) to make a book of it all. There’s the story of a Russian mobster trying to rebuild the power of the Russian Mafia after the man in the letter jacket destroyed their operations. There’s also the story of a unit of soldiers fighting a losing war, unsure of if they’ll ever go home again. The final story is that of a serial killer cop, using his position of being above the law to get his sick thrills at the expense of justice being done. While this eliminates the mystique of the first game, the story direction is entertaining and interesting, truly pushing players through even the hardest levels to see what happens next.

Women and folks that aren’t white get more of a role thanks to an expanded story.

Representation is incredibly better in Wrong Number than it was in Hotline Miami! While a relatively small number, there are two playable women in the game—a huge increase over the zero of the first one. There are playable characters that are not white, as well as more NPCs that are also not white, which is well on the way of accurately representing Miami’s diverse culture. However, set in a city as diverse as Miami, a cast that’s mostly white men is still unrealistic. The lack of LGBT representation is a bit off, too. Miami is one of many cities in the United States that was at the forefront of the LGBT movement through the ’70s and ’80s, and it is unfortunate that this history has been overlooked. It deals its setting somewhat of a good turn—and much better than the original game—but unfortunately still misses the mark in this regard. 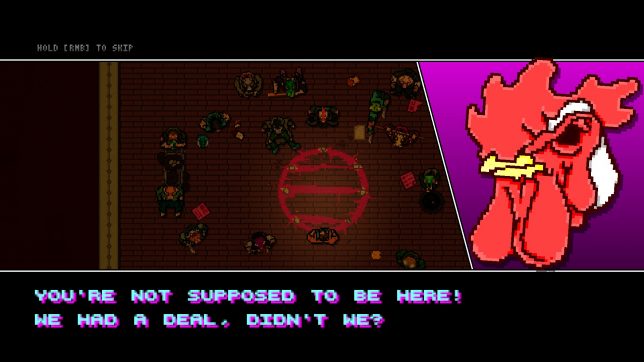 Obtuse level design is just one of many flaws.

There’s honestly a lot that’s wrong with the gameplay to bear in mind as well. It feels rushed, with gamebreaking bugs that are easy to reproduce making their way into the game. Many aspects run off the assumption that you’ve played, and mastered, the first game. Throwing you head-long into a complex story, with difficulty that assumes you know what you’re doing, makes the game inaccessible to people who did not play the original. There’s one instance of graphic sexual violence, and then afterwards implied sexual violence—though you’re asked before the game starts if you want to see those scenes or not.

Perhaps the worst part is that there will not be a third game. There will be no follow ups to make sense of the mess that occurred in Miami during the early ’90s. 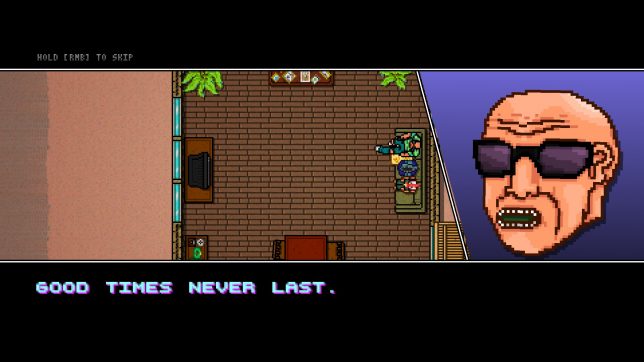 Meta commentary regarding the series not getting a sequel?

But, do I recommend this game? For all the flaws in it, is this game worth playing? Definitely—whether you liked the original Hotline Miami or you’re new to the series. If violence isn’t your thing, confusing stories aren’t fun, or you didn’t find Hotline Miami satisfying, skip it. It’s more of the same, and that’s good and bad. But, I definitely think it’s worth your time and money.

GameCola's Editor-in-Chief is leaving on a fantastical journey tomorrow!