We’re all familiar with the scene. You’ve stood in line for hours waiting for the store to open, wanting to finally get that anticipated Nintendo good you’ve been reading about for months. You’re only sixth in line! Unlike those poor folks twenty places back, you’re guaranteed to get it. Right? 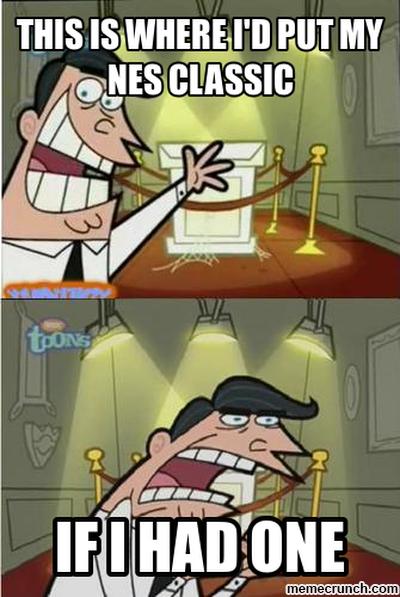 This is a Nintendo item we’re talking about! Of course they’re sold out already! It doesn’t matter if it’s the Wii, amiibo, or the NES Classic—you’re going to have to call every store in your area every week for the foreseeable future if you hope to get your hands on one. But, the Switch will be different!

It’s been almost a decade since Nintendo failed to properly stock the Wii, so they have exact numbers on consumer demand. They’ve taken their latest sales report and come up with a plan to make sure everyone gets the Switch as soon as it’s released. The Wii sold 101.63 million units in the past ten years.

So, they’ll be releasing 101.63 million Switch units on launch day!

It’s the perfect plan! They won’t have to worry about producing another Switch for years! Rather than maintaining costly factories to slowly pump these things out, or even having warehouses to store the consoles themselves, they’re shipping the entire run of units directly to retailers. Nintendo is basically looking forward to a $10 billion paycheck on launch day.

Is this the way of the future? Will Sony and Microsoft be able to keep up with these kinds of business tactics? Only time will tell, but we here at GameCola are excited to see Nintendo take back its place as the #1 leader in videogame consoles.