2064: Read Only Memories is a fun adventure game/visual novel that was financed through a successful Kickstarter. I’m always a bit wary of Kickstarter projects these days, as I’ve chipped into several promising ones where the developers disappeared to Latvia halfway through the project and decided a better use of my money would be the construction of a giant middle finger aimed directly at my house. Fortunately, games like this one restore my faith in Kickstarter as a concept, to the point where I will now probably be funding six or seven other giant middle fingers in the near future.

You play as “YOUR NAME HERE”, a “YOUR GENDER IDENTITY HERE” journalist that eats “WHATEVER YOU WANT”. The name and gender identity options are great, but I have no idea why the diet option was included. “Yeah, I was having fun with the new Mario game but then I found out he eats pasta and I’ve got Celiac disease so I stopped playing just in case. Never know how Celiac disease is going to get you.” Of course, being the very mature man that I am, I played as Doctor Poopoo, a man that is an omnivore (my desired diet of “the blood of my enemies” wasn’t available but I kept playing regardless).

You’re living the fairly standard adventure game protagonist life of being kind of a failure that lives in a terrible apartment, until one day a special robot your friend had been working on shows up on your doorstop asking for help finding them after they were whisked away following an altercation with some mysterious jerks at their apartment. Well, “friend” here is used rather loosely as you apparently haven’t talked to him in years. I can promise you right now, if you go missing and we haven’t talked in a couple of years, don’t send your sentient vacuum cleaners to me looking for help. 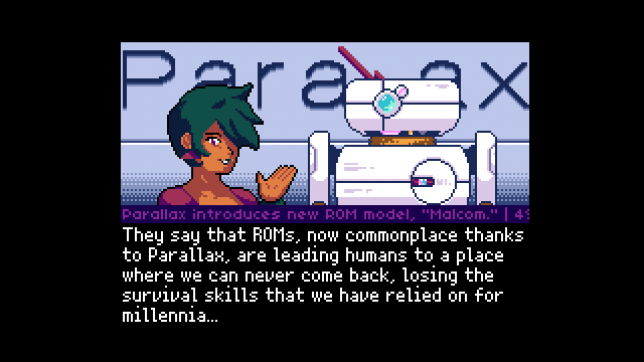 The game does an incredible job of world building, to the point that that was my favorite feature of the game. They build up a really interesting world in which the adventure unfolds, culminating in a sci-fi, cyberpunk adventure brimming with creativity. It draws inspiration from some older classic adventure games like Snatcher or Gabriel Knight, but the world here is a unique creation that really sets itself apart from any of its predecessors. Much of humanity has elected to use advances in technology to become hybrids, genetically modifying themselves and changing their skin color or attaching robotic appendages or becoming literal cat ladies that stand around in bars and have terrible attitudes. The most interesting advancement, however, is your friend’s little robot pal, Turing. While robots are everywhere in this future, helping the police or handing out bottles of water, Turing is the first one with true sentience. Things come together to form this unique and complex society, and the game uses this backdrop very well to tell its story.

The main selling point here is the story, so it is fortunate that Read Only Memories has a good one. Trying to find your missing friend leads to a more complex narrative than you might imagine, and there are plenty of twists and turns waiting as you dig your way deeper into the mystery of your friend’s sudden disappearance. There is a fun cast here to talk to as you try to figure out what happened, even if there are a couple here that I wanted to throw out into traffic in front of some weird futuristic cars. 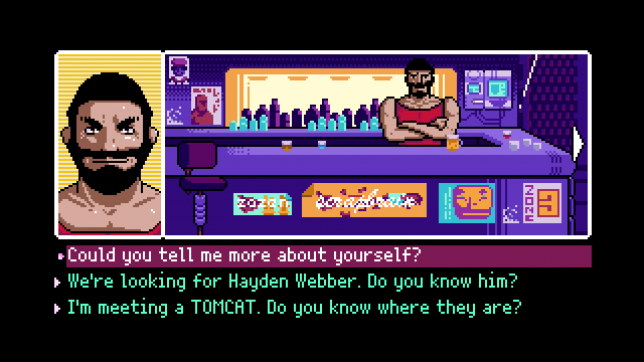 There’s a decent amount of dialogue options here, and usually there are at least two different ways you can work your way through most situations. You can be calm and understanding, doing good journalist work and methodically working your way through friendships and acquaintances so everyone is happy—or you could throw up two giant middle fingers, kick down the doors, and pee all over everyone’s furniture while they quietly discuss amongst themselves what the hell is wrong with you. I’m not sure why you’d want to be a jerk to some of these people (other than for the sweet, sweet PSN Trophies that require you to do so), but the option is there if you’re feeling particularly anti-social at the moment. While the game doesn’t have Telltale levels of branching dialogue options, there are enough here that it feels like you are actually driving the story forward and not just a passive observer of the tale.

The game does seem to be a bit too in love with its dialogue at times, rambling on while you politely check your watch and wonder when you can get back to the story. It isn’t that the writing is bad—it isn’t—but the way the game drones on about the most menial things absolutely kills the pacing. It’s like your mom called to summarize the plot of Snatcher while you were in the middle of solving a mystery. “Did I tell you? Your old friend just disappeared the other day! And what happened was—oh, wait. I forgot to mention, Johnny, you remember Johnny. The neighbor’s boy? Yes, he’s seeing someone now. And they’re very happy together. Oh, you should see—” What was that about the disappearance? Can we talk about that some more. “What? Oh yes, the disappearance. That reminds me—have I ever given you a three-paragraph explanation about how this fake Internet system works. Let me tell you in detail.” Read Only Memories has a nice five-hour story the game takes ten hours to tell, and next time this company launches a Kickstarter campaign I hope they include an editor in the budget.

Most of the game is spent wandering back and forth, talking to people and slowly uncovering more of what’s going on. People familiar with visual novels or adventure games should feel right at home here, as most of the action is divided between talking to people and looking at stuff. The game is nice and allows you to cycle through any objects on a given screen that can be interacted with, so there is no pixel hunting that needs to be done to find that one itsy bitsy little item that is absolutely crucial to a puzzle like five hours down the line. It is a fairly straightforward experience, and I doubt this is the kind of adventure game anyone is going to be stuck at for any significant length of time. 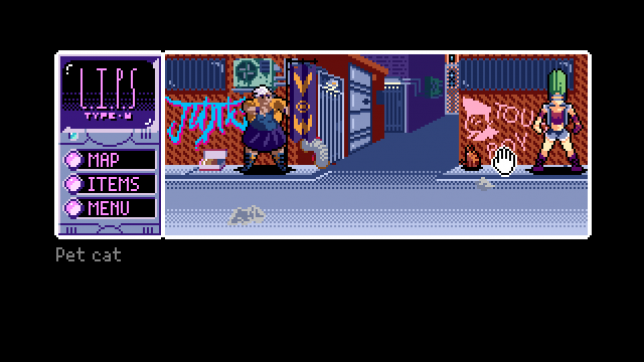 Of course, part of the fun in games like this is discovering all the weird things you can do. There’s plenty of options for goofing around here, which is always my favorite part of games like these. I’m not comfortable in an adventure game unless I’m doing dumb things and being scolded by the game for it, and there are lots of fun little Easter eggs or extra pieces of dialogue if you’re persistent enough. Along the way, I got blackout drunk, harassed the neighbors until I got arrested, and tried to put spoiled milk on absolutely everything I could see.

There is a puzzle at one point in the game that requires you to get the right drink for the right person, and the bartender never seems to know what he’s doing so Turing has to explain the ingredients for every drink for him (including for straight whiskey which makes me a bit concerned that this guy might be suffering from a pretty severe head injury—”Whiskey? So many drinks these days…uh…what’s in that one again?” Whiskey. “Oh, yeah, that makes sense I guess. Are my ears bleeding?”). Of course, being the adventure game connoisseur that I am, I spent the next thirty minutes tasting everything in the bar, getting blackout drunk like six times, and having Turing drag me back to my apartment to yell at me. There are a lot of fun little scenes like this, and while the main plot is fairly serious that doesn’t mean there aren’t some chuckles to have along the way. 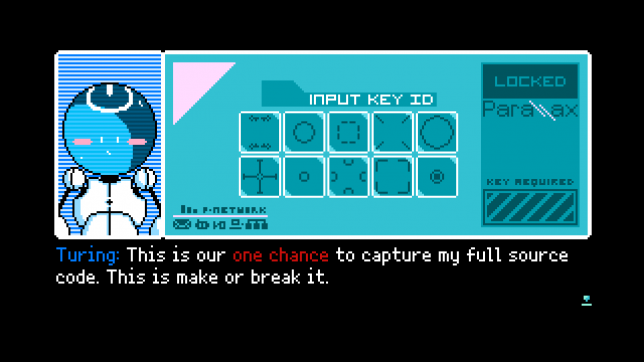 The most disappointing aspect of the game is what I will generously refer to as the puzzles. This is definitely much more of a visual novel sort of game, which is fine, but at times the game wants to pretend it is a point-and-click adventure game, which is not fine. No matter how many times I put on my Batman costume, the local police assure me I have no authority to fight crime, and no matter how many times 2064 wants to put on its adventure game pants, I have a hard time classifying most of what the game throws our way as “puzzles”. You get a Trophy for completing the first one in the game, and honestly I didn’t even know it was a puzzle. There is a tablet with a space for a memory card, and you find a memory card about a foot away. Yeah, sorry, I don’t think that counts as a puzzle, game. I’ve never seen anyone put a flash drive in their computer and congratulate them for solving that brain teaser. There are a couple of halfway decent puzzles sprinkled around towards the end of the game, but for the most part the stuff here is thoroughly unimpressive. I like my puzzles like I like my coffee: hard and thought provoking (it is really hard for me to get my order at Starbucks), and the ones here don’t really satisfy those requirements.

The visuals and sound are also both great, and the old school NES presentation really fits the game well. The 16-bit pixel art does look a bit jarring on a PlayStation 4 and HDTV at first—it feels a bit like having a Ferrari and using a horse to pull it places—but it gives the game a sort of retro future feel that works well considering everyone in the game looks like they’re going to an 80’s themed party. The game has fully voiced dialogue, too, and most of the voice actors do a good job. There are a couple of duds here and there amongst the minor characters where people sound less like they’re acting and more like they’re reading the ingredients on a box of cereal. The music is fantastic as well, and considering this is an indie game that initially relied on a Kickstarter budget, this is a very well put together package from top to bottom.

Still, even with my complaints, 2064: Read Only Memories is a pretty easy recommendation for anyone that doesn’t mind a bit of reading. It is a fun story with a really great world created around it, even if the dialogue can drag on a bit at times. Sure, the puzzles here are few and unimpressive, but this is more of a visual novel anyway and it at least gets the visual novel stuff right. There are several different endings and plenty of Trophies to find, and this is the sort of game I could see myself sitting down with again in a couple months to see what else it has in store. Not quite good enough to jump right back in, mind you, but something I’ll end up starting up again when I’m bored and looking for something to play in my library. “Read Only” Memories is an appropriate name for the title, because only reading is about all there is to do here, but sometimes that’s enough.

Sometimes when I post videos like this, they require a long prelude to either 1) explain the context, or 2) make them funny. This requires neither.