Final Fantasy VII is a milestone for the series, the first Final Fantasy in fully-rendered 3D, on a Sony console, and the first Final Fantasy on a CD-ROM. It featured some rather atypical elements to the Final Fantasy series, such as a more science-fiction setting and a narrative centered around a single character. Its characters, storyline, and concepts stayed with a generation and spawned numerous spinoffs. Even with the improvements brought on by later games, Final Fantasy VII still remains a contender for Best Ever. In no small part that could be attributed to Cloud Strife; a former member of Shinra’s military, mercenary, and environmental activist, he was one of the first Final Fantasy characters to have the story of the game focus almost entirely upon him. But there’s so much that the story doesn’t outright say, and—while invoking Death of the Author—this article seeks to explore two such issues: Cloud Strife’s gender identity and sexuality! 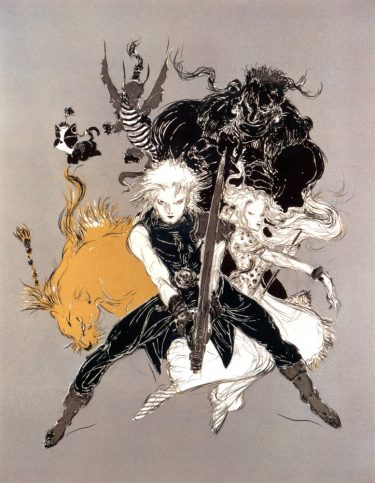 While Cloud Strife was supposed to pander to American aesthetics with regards to a hero, he certainly is atypical of the American hero.

The only time gender is addressed is a significant event in the first disk: Tifa has been kidnapped, and in order to save her Cloud and Aerith must infiltrate the crimelord Don Corneo’s mansion! What should be simply breaking the door down is changed to an infiltration mission, where depending on player action can lead to Cloud spending waaaaay too much time on a simple disguise…for a cisgender man, at least. What could have been solved by just putting on any old wig, and any old dress, gets turned into a huge miniquest with right and wrong choices. Powder Puff sporting events are a similar situation, where in some locations boys dress as cheerleaders to cheer on girls competing in high school sports, but none of the participating men go through too much trouble. Unlike Cloud’s dress-up miniquest, they just put on a school uniform, a wig, and some exaggerated makeup to cheer the girls on. Though this situation has more gravitas, that doesn’t mean that the care which the quest demanded was necessary. 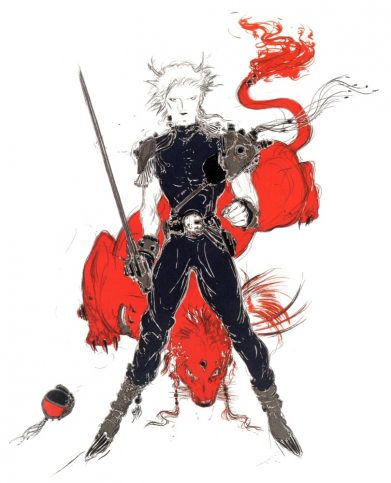 A dog, a sword, and a grizzled past implying he’s experienced the world and been chewed up by it.

As you may know, failing the quest is inconsequential. You have an easy fight before rescuing Tifa from Don Corneo, while success is not a big deal either as it just nets you a few extra healing items. There is, in fact, probably not a situation in the game with lower stakes. Tifa could probably take the crime lord alone at this point in the game, and is probably just humoring him to avoid starting a gang war. Why all the ceremony, the side questing? As a joke, maybe, but honestly that’s the most boring reason possible. Cloud could’ve just told Aerith they’re blowing through the door, he could’ve said they’re rappelling in through the windows—instead he chose going through an elaborate series of events and a PTSD episode to dress up as a girl. I’m not saying this definitively makes Cloud Strife a transgender woman, but this is definitely not a choice that a cisgender man would make. 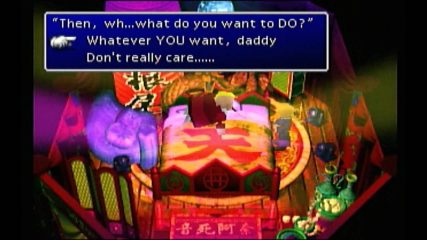 “Was this scene totally necessary?” I ask, while trying to forget my save file before this quest line started.

But Cloud is totally straight, right? The Gold Saucer proves that, he’s got a total of three hot girls he could go on a date with! But, he could also get woken up by a big, passionate single father with intimacy issues and pent up insecurity. Barret is actually an option to get a date in the Gold Saucer, the original Dream Daddy dating sim, and it goes disastrously from start to finish. However, it shows some very real anxieties around older people coming out of the closet. Barret and Cloud both are nervous and awkward, they don’t know how to handle the situation. Everything went wrong on the night, and while one can argue Barret didn’t initiate the “date” for romantic reasons it also looks like this is something Barret was looking forward to. He arrives later at Cloud’s room than the other characters, which prevents them from going on any of the special couples events except the Gondola—and he’s clearly disappointed in this. While you could interpret it in a “You’re screwing up with the girls maaaaaan!” way, Barret seems more upset that he went through with this disaster of a night. Cloud doesn’t know what he’s doing here, Barret doesn’t know, both are clearly emotionally stunted men who cannot express their feelings. Maybe they don’t have feelings for each other, but very clearly they’re conflicted with their perceived heterosexuality. 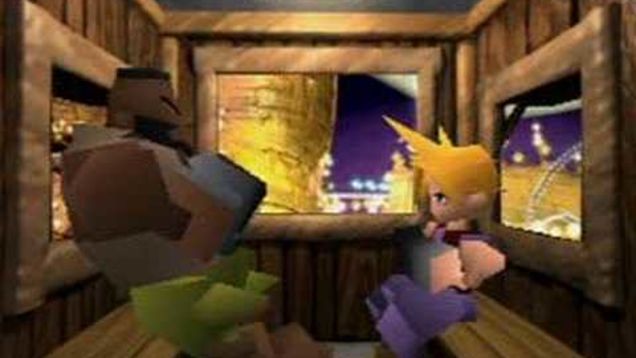 This scene was more awkward than it needed to be for being two “straight” dudes out having fun.

But wait, there’s another piece to the puzzle: Zach Fair! Unfortunately, we don’t get to see a lot of him before his untimely death. We know he was Aerith’s boyfriend, we know he was the true Soldier 1st Class that Cloud claimed to be, and the original wielder of the buster sword. The two were close after their escape from the lab. It’s implied they freshly escaped Nibelheim’s lab before getting in the truck, however I think there may have been some time between then. Cloud’s incapacitated state makes one think he’s still sick from the tank, but he’s also prone to motion sickness so this could be days, or even weeks, after that. And then there’s no indication of when the two got off the truck, so they could’ve been doing mercenary work for a while before Shinra tracked Zach down and killed him. What does all of this have to do with their relationship? It’s actually an important thing to consider. 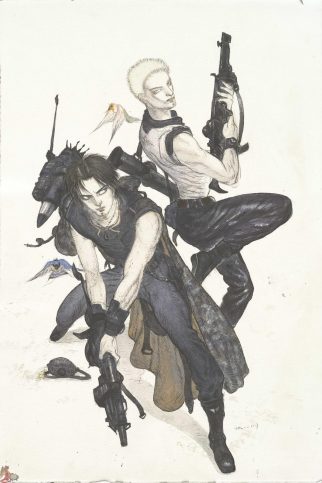 Okay, this isn’t FFVII, but I first thought this was an Amano artwork of Cloud and Zach. Just ex-military guys being dudes, right?

Cloud and Zach spent an unknown amount of time together, and during this time they basically dressed the same and were inseparable. Zach’s bond with Cloud was so great he even included him in his plans for the future. One could argue that’s just from being in Shinra’s military together, however they basically dressed the same despite the possible chance to get new clothes—different clothes—along the way. There was something going on; some kind of intimacy that was not communicated in the game or any attached media. Maybe they never went “all the way”, but there was something that Cloud and Zach shared that inspired Cloud to take up his friend’s weapon and fight Shinra. It wasn’t the destruction of Nibelheim that drove Cloud into the arms of Avalanche, but the death of Zach. 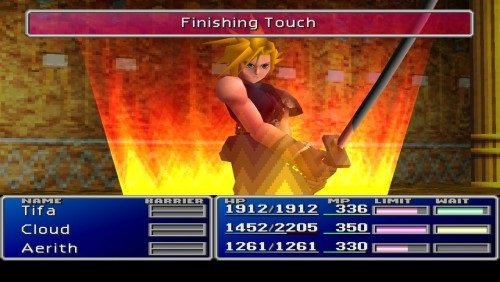 I guess, in the end, we don’t get much in the way of conclusions. Much like with the real Final Fantasy VII.

Honestly, I’ll admit this sounds rather thin; however there were bigger issues going on in the narrative. Fighting a war against a megacorporation bent on destroying the world for profit, human destroying monsters being unleashed by the planet to save itself, and the mad clone of a dead hero trying to turn into a planet-destroying monster himself doesn’t leave much room to explore gender and sexuality. There are glimpses into another possible life—dates with comrades and moments where the only thing he could think of was to dress like a girl, on the run with a stranger from the military who quickly becomes his best friend—what could have been had Cloud Strife gotten to live a less epic life? Aside from fragments that resonate with the LGBT community, we really don’t get a definitive answer to Cloud’s sexuality or gender identity. But I do think we get enough to speculate and fill in the gaps ourselves.

And now back to your regularly scheduled podcast...