Welcome to “Oh, the Humanity!”, a column that reviews videogame books and movies. Today, I’m reviewing the third book in the Phoenix Wright manga series! Not the Miles Edgeworth manga, which was a collection of short stories by different people. This book is a full-length case, made to resemble one of the games.

The story is that Phoenix and Maya are at Fortune Circle, a building with five different fortune tellers. Phoenix gets stuck with the joke fortune tellers, like the palm reader who is terrified of touching people’s hands, and the guy who predicts the future with ice cream. “I see your future will be delicious.” 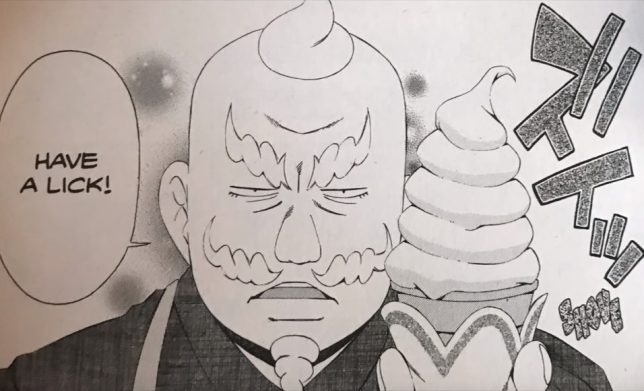 Maya goes to the Venutian, a woman dressed like a witch. The Venutian makes Maya remove all her electronics, then she forces Maya to grab her hand. She tells Maya to hold the hand and not let go. Then she puts a blindfold and headphones on Maya, so she can’t see or hear anything. I’m honestly surprised Maya is not at all suspicious of this plan, considering how many times she’s been framed for murder.

Phoenix makes friends with a schoolgirl named Russi Clover. Venutian predicts that Russi will be possessed by the Lord of Death, right before Russi visits Oracle Hecate. Wouldn’t you know it? Hecate’s fortune telling ALSO involves the client not being able to see or hear anything. This feels like a cover-up. I would be suspicious of this place, even if this WASN’T a murder mystery.

Specifically, Hecate forces Russi to put her arm through a hole in the wall, which she calls “The Portal To Hell”. Russi closes her eyes and chants the whole time. The next thing you know, Hecate is murdered, and Russi is arrested. Venutian blames the Portal to Hell and smashes a giant hole in the wall, because she’s apparently unaware that destroying a crime scene is illegal. 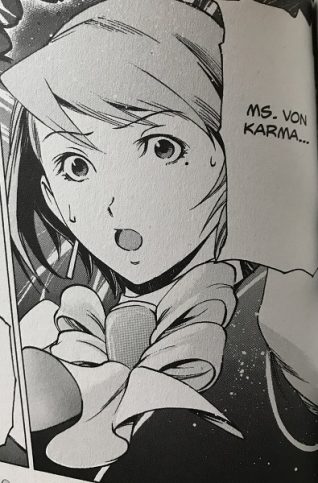 Franziska von Karma helps investigate the crime scene—and by “helps”, I mean she mostly insults Phoenix and Maya while they investigate. Privately, Ice Cream Man tells Phoenix that he was watching the backside of the wall. He did NOT see Russi’s arm go through the hole in the wall.

Phoenix also learns that the rooms are all connected through a vent system. He purposely decides not to use this information in court, partially because he’s an idiot, and mostly because it makes the trial more dramatic. No, seriously, Phoenix purposely holds off on revealing this so it can be the big cliffhanger at the end of part two.

Russi’s trial begins. Phoenix says his client is innocent, because she didn’t leave fingerprints on the murder weapon. Franziska totally ignores this valid argument and says Russi must be the culprit, because the room was locked.

Phoenix argues Russi is innocent because she didn’t get any blood on her, besides her hand. Franziska argues that the culprit wore a raincoat to avoid getting blood on themselves. Phoenix says this contradicts Franziska’s claim that the crime wasn’t premeditated, and again, she says, “Whatever. Your point doesn’t matter. Russi must be the culprit because the room was locked.”

Phoenix finally reveals that the culprit could have entered through the vent system. He feels good about himself, until it’s quickly pointed out the vent system was closed that day. Oops.

When Maya mentions she had red ink on her hands at the time of the murder, Phoenix solves the mystery. Maya thought she was holding the Venutian’s hand, but she was actually holding Russi’s hand! That’s why Russi’s hand didn’t go through the wall, and how Russi got red liquid on her hand. It’s kind of amazing no one noticed her hand was covered in ink, not blood.

The Venutian normally does the hand trick as a distraction so she can go through her clients’ phones. She looks up all their personal info, then she pretends to be psychic, and she tells their personal info back to them. I’m surprised this plan works. Don’t any of these people lock their phones with a password? To be fair, the book says she also goes through people’s wallets, but you don’t really need to see someone’s driver’s license to know their height, general age and home state. 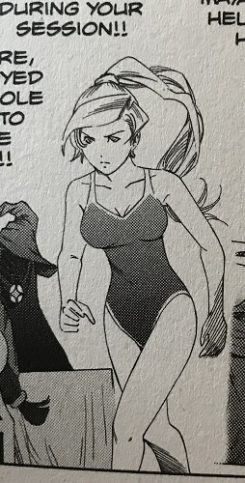 That’s not the weird thing, though. The weird thing is that whenever the Venutian does the hand trick, she strips out of her witch costume and walks around in a swimsuit. We even get a few pictures of her in a swimsuit. Could we maybe NOT interrupt the big revelation with beach babes?

The Venutian and the victim were secretly working together. She killed the victim because the victim got greedy and tried to cut her out. She confesses to the murder, and everyone goes to have ice cream with Miles Edgeworth.

This book is split up into three parts, and I imagine all the parts were sold separately, because parts 2 and 3 both start with recap sections. I’m glad they were all together, because they’re SUPPOSED to be read together. If this book had only contained the first two parts of the story, I would be giving it a much harsher review.

I mention this, because I’m told this is the only book of the manga series that doesn’t split up the story among multiple books. I don’t like the sound of that… 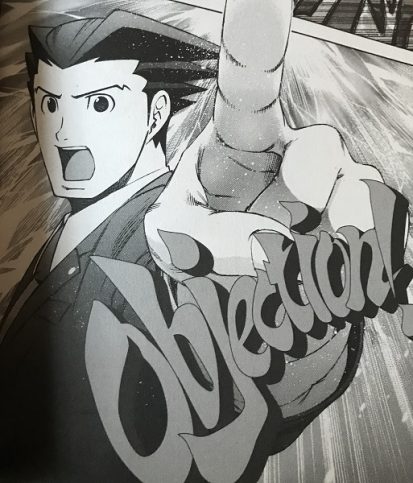 The artwork is good, although I was a bit turned off by the start of the book, where there are many panels of characters screaming. Yes, it makes sense for a graphic novel to have visual gags, but it was a bit much. I liked the design for the defendant and the ice cream man, but the culprit’s design seems to be an excuse for swimsuit shots. I was surprised at how attractive Franziska von Karma was. She constantly makes cute faces, which is weird to say, because she’s constantly yelling at Phoenix.

Overall, I’d say the book is good for what it is: a condensed Phoenix Wright case in picture form. The trial takes up half the book, but I feel like if this was a game, the trial would have been much, much longer. It certainly does feel like a trial you’d see in one of the games, though; everything was thought out ahead of time and all the little clues are there, including a few clues which flew under the radar as jokes.

I give Phoenix Wright: Ace Attorney Volume 3 a 6 out of 10. If you just can’t get enough of my review of this manga, you can also watch my video review.

How have you survived reading GameCola without any Phoenix Wright news for so long?!