As you may have already known by clicking on this article, I collect videogames. Now that we’ve gotten the formalities out of the way, let me welcome you, dear reader, to the December 2018 installment of your favorite collection of stories about my storied collection of videogames, This Yard Has Saled!

Our tale begins immediately on the first day of December, and rightly so, since that day happened to be a Saturday, the ideal day for my favorite outdoor activity: yard saling.

As bad luck would have it, my friends all decided upon sleeping in on this cold, near-winter morning, so I went out alone into the bleak and frigid Long Island air with nothing more than cash in my pocket and a fleeting desire to move somewhere warmer.

Using my trusty companion Yard Sale Treasure Map, I embarked on a quest eastward toward the more affluent neighborhoods of my island home. Surely they must have some videogames lying around somewhere! Unfortunately, the word “somewhere” seemed to mean “nowhere” during this Saturday; however, there is still a lovely story to tell.

At the sixth home I visited on this morning, an estate sale was in progress. I parked my car at the curb on the opposite side of the road and walked onto the property with my hands in my pockets to ward off the dry and brumal air. As I walked up the stoop of the house and through the front door, my eyes were met with the dazzling sight of numerous paintings of well-known and famous religious icon, Jesus Christ—all seemingly done by the same artist, who signed their name in the bottom-right corner of each one. As I scanned the items left for public consumption, I noticed many of them were also Christian-themed or related to Christianity and Jesus in some way; not a bad thing at all, but typically not a good sign for someone who is trying to collect videogames. But, as always, I inquired of the host because one can never be too sure.

I approached a woman seated behind a plastic folding table who was reading a novel and got her attention with a simple “Excuse me.”

“Yes?” she responded, looking up to me.

“I was curious to know if you might have any old videogames.”

The woman’s face contorted from a pleasant, friendly smile to a dark, iniquitous frown.

“And what would an otherwise smart young man like you want videogames for?” she hissed at me as she stood from her seat and closed her literature. 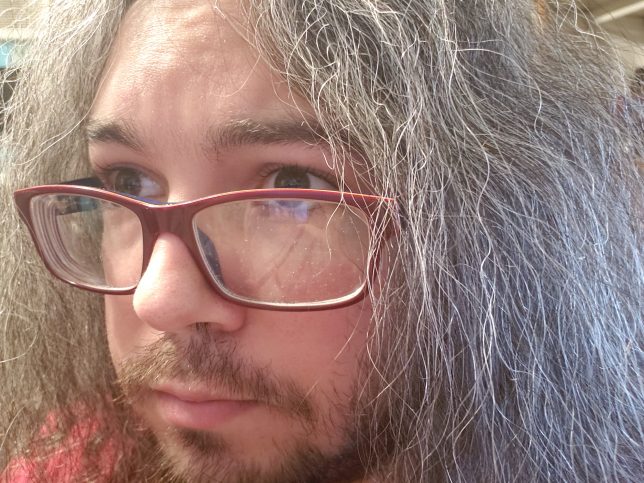 Probably the face I made at that exact moment.

“I-I collect them,” I said, a bit nervously. I’d been met with criticism before due to my hobby, but never in this manner and especially not from a stranger.

“A good, upstanding man like yourself would be wasting his time with that filth! The devil captures and preys on God’s people with violent media. Videogames contribute to your sin!”

I fell silent and managed to edge out the statement, “Alright, I’ll just go, have a nice day.”

“Son, tell me,” she said, laying a hand on my arm and impeding my getaway. “Wouldn’t a nice young man like yourself do well to purchase one of my late sister’s paintings? Any of them would make a wonderful addition to your lovely Christian home.”

“No, thank you,” I said Jewishly, and power-walked to my car. Sure, sometimes you don’t find games, but countless memories are made. Memories I’d rather not make.

Another Saturday arrived and I found myself at the home of my friend Andrew in Paramus, New Jersey. I ventured there to partake in a Super Smash Bros. Ultimate tournament he had orchestrated with our mutual friend Kristen. As the game had only launched a day prior, they had the immensely titillating idea to set a brand-new copy of the game as the grand prize for one lucky winner. The only caveat would be a $5 entry fee.

After calculating gas and toll charges, I deemed it more worthwhile to drive an hour and a half to New Jersey to compete for a chance to win it instead of paying $60 of my own. Oh, and I got to see my friends! Right.

Suffice it to say that I was in videogame heaven when I showed up and we immediately started playing. I tried my hand with some of the new fighters on the roster and had my butt kicked numerous times, but that did not darken my expectations of winning a shiny, new copy of Ultimate.

Once everybody had shown up, I lost myself in playing to the point that I had forgotten about the reason for my arrival in the first place. Somewhere around four hours into this gathering of friends, I spoke up and addressed Kristen and Andrew.

“Uh, so, what’s going on with the tournament?”

Kristen shrugged and replied, “Nobody else wanted to do it.”

My mouth fell agape and I shot back, “Why didn’t anybody tell me we weren’t gonna do it?”

“I think even we only just found out tonight,” Andrew said, tossing back some chocolate-covered pretzels.

I shrugged it off and played on with my friends. But heartbroken and empty-handed, I returned home that evening with no new trophy to place on my shelf. Instead, the following day, I drove to Target alone and with my head hung low to pay $60 for a copy. Factoring in gas and tolls, I overpaid, but I had a wonderful evening with my friends, so I suppose that it was worth it in the long run!

Another Saturday! Wow! And just the right one, too, as this would be the day I received a visit at my home from fellow GameCola staff writers Nathaniel and Shannon Hoover! With Christmas right around the corner, one of their first acts after hugging me hello was to hand me a pile of games and tell me to do with them as I pleased. Among these games were two I didn’t already own, Dragon Quest VIII: Journey of the Cursed King for PlayStation 2 and Mighty No. 9 for Wii U, the latter of which convinced me to pledge a generous $114 during its Kickstarter run. And yet I still hadn’t picked it up. They also handed me a lovely Mega Man X posable figurine, which I swooned over for a few minutes. 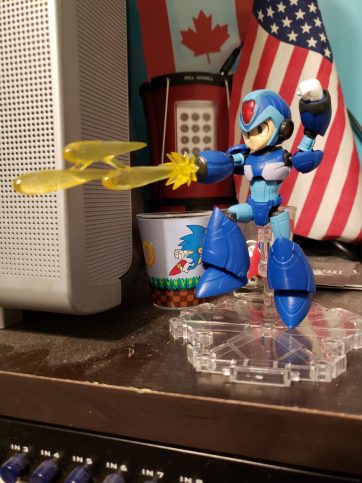 X is very happy to defend my television from Mavericks.

The Hoovers stayed with me overnight and returned home on Sunday, but not before we passed that Saturday night driving through a Christmas-themed light show at Jones Beach and stopping at their concessions building for some classic arcade games that they had set up there for the occasion.

Okay, this whole “Saturdays only” thing is starting to wear thin, am I right?

I’m happy to say that my friend Shawn came up to New York yet again for the holidays, and on this day, he joined Joe, Dustin, and me as we just passed the time enjoying each other’s company at Joe’s apartment. After all was said and done, the question came about as to who would drive Shawn home, as he had no vehicle of his own, being a visitor. Two fingers met a nose each amid the cry, “Not it!”, and neither of those fingers nor those noses belonged to me.

As I parked in front of Shawn’s mother’s place, he made a comment about having dug through some things he left behind before he moved down to Florida.

“I have a Kinect for 360 complete in the box that I don’t really need anymore. You wanna take it off my hands?”

“You hate me that much?” I responded, chuckling. “Sure,” I continued. “How much do you want for it?”

“I’ll do it!” I sang, happy (somewhat) to add the Kinect to my collection and also happy to ensure that Shawn would accompany us to MAGFest the following month.

I followed him inside and he produced the Kinect from his bedroom and brought it out to the kitchen, where I stayed behind. As Shawn handed me the Kinect and I reached for my wallet, he waved me off and said, “Just give it to me at MAGFest.”

“Are you sure?” I asked, truly wanting to be noble.

“Absolutely. Don’t worry about it now.”

I hugged Shawn. As I took the Kinect box under my right arm, we passed a short amount of time recounting a story from the Kinect’s initial run in retail stores, just at the time it was first launched. Long story short, an interactive Kinect display once mistook both the long-haired Dustin and myself for blonde women in its avatar creation mode, despite the fact that we are not only men, but also very clearly not blondes. Oh, Kinect. You silly, terribly inaccurate peripheral. 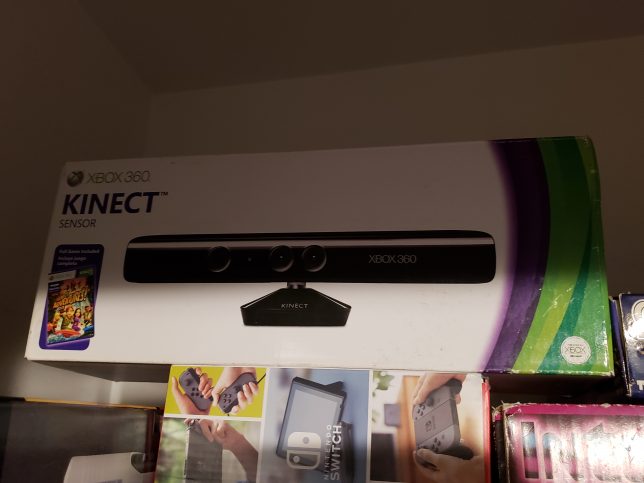 It watches not only from atop your television, but also from the shadows.

I woke on this morning at my grandmother’s house to the smell of bacon and the sounds of that very same grandmother tidying up in the kitchen. As I stirred, she walked into the living room, where I was situated couchant upon, well, a couch.

I’ll just explain briefly so as not to confuse you, since I made a comment about being Jewish earlier in this article. I am Jewish. But my father’s side of the family is not. I celebrate Christmas with them! And as such, I was happy and excited to both wish and be wished a merry Christmas.

As is the usual for Christmas with Grandma, we awaited the arrival of my Aunt Kathryn and her girlfriend Laura, who live in the apartment upstairs. Typically my father also stays the night, but since he recently adopted a kitten, he stayed home to be sure she was fed Christmas morning. Thus, after spending some time eating and talking one-on-one with Grandma about our normal Christmas plans of visiting my cousin Toni’s house for the real festivities, Aunt Kathryn and Laura arrived bearing gifts.

I received a bounty of lovely gifts from my family, but one I must mention here is a large and incredibly heavy square-shaped box. I unwrapped the gift only to find a bland cardboard box, which I then also opened. Inside was a large Question Block from the Super Mario series, which I immediately recognized, and suddenly I understood the weight of the box. It was the limited edition Super Mario Bros. Encyclopedia! I unsheathed the book from its Question Block dust cover and immediately began to leaf through it. 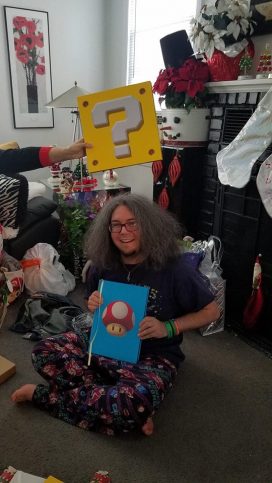 If you ever want to get on my good side, a book about videogame history is a good start.

My aunt’s face lit up as I looked through page after page of Mario history, pointing at picture after picture and announcing each one like a small child. Truly, it was a lovely and fantastic gift to receive. Thanks, Aunt Kathryn and Laura!

The month in review:

So I didn’t get quite as much this month as I did last month, but if we’re being very honest, it’s mostly because I was saving money for MAGFest, which I did get to attend with my friends.

Rest assured you will hear about all of my collecting and various shenanigans at MAGFest next installment. Until then, thanks for reading all the way to the end (or skimming, I don’t know what you’re like). Stay tuned for more This Yard Has Saled!

Matt has been playing videogames since he first handled a Sega Genesis controller (and subsequently a Super Nintendo controller) in 1996, but now his life has spiraled out of control and he's a videogame collector and historian. Gaming is a gigantic part of his life, and trust me, he makes sure everyone knows it.

Today, in 2002—when I was a junior in high school—I created the mailing list that would become the website we all know and love today. Happy birthday, GameCola! It seems like only yesterday we we