Last week you were in that go-nowhere town, Sundown, living a go-nowhere life. When some fascists decided you needed to die you fought for your lives, and you handily won. But that victory did not last, and you headed toward Hopeville with the desire to live a little safer. Fascists followed, and a man in armor with a tusked meatmech was up to something. A battle was fought over the fate of Hopeville, and you had won. Until the Sun, that destroyer goddex, struck down and obliterated the town and everyone inside. Now you head towards the Rozarx, and the town of Devil’s Teeth. You are the Sundown Meatpunks, and you’re running on empty. 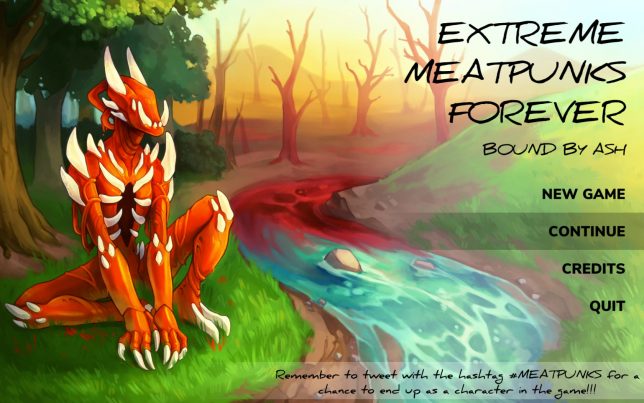 Not nearly as serene as pictured.

EXTREME MEATPUNKS FOREVER: BOUND BY ASH is the mouthful of a sequel to EXTREME MEATPUNKS FOREVER. You follow the continuing adventures of the Sundown Meatpunks, a group containing Cass, Lianna, Brad, and Sam, as they journey to steal the Sun and save the world. Controls are the same—it’s a visual novel with WASD and mouse-based mecha brawling. The music still evokes the feeling of a punky sci-fi Western Wasteland. The story is still about the multiply-marginalized surviving in a world that wants them, with echoes that hit far too close to home. The art is more rough, but through that roughness expresses more. On top of that, it does a few strange things that cross genres here and there. It sounds like more of the same, and maybe it is, but every sequel doesn’t need to depart from the original formula.

As much as things change, we still have the same controls, and the same humor.

This isn’t our first meatpunk mecha brawler, right everyone? It’s a visual novel, advancing the story until it’s time to fight. The fighting is explained in a meta-aware way that somehow ties itself back into the universe. Move with the WASD keys, click the mouse buttons to perform attacks, each mech has a different passive move and active special attack. Somehow the new art changes the whole feeling, and what once felt like a dull chore becomes an exciting brawl for one’s life. There’s a rhythm minigame that’s super fun, and a walking sequence where the player characters explore a small town. Not a lot has changed, what was added is mostly for gags, but it’s all great and charming.

The story picks right up, continuing the same writing, humor, and themes.

We pick up the story from where we left off, after Hopeville is destroyed despite everyone’s best efforts. Cass, Sam, Lianna, and Brad have resolved to steal the sun, and prevent the Fascists from getting more power than they already have. It’s a rough and raw story of living life in a world that hates; one that echoes and expands upon themes from the previous episode. We touch upon themes of surviving racism, homophobia, transphobia, of coming home, and of coming out. It’s about falling in love, learning to survive, learning who you are, and learning to let go. Most importantly, it’s a story about riding around in twelve-foot-tall monsters made of meat and killing Nazis.

Whether a gimmick, a joke, or setup for a scene, music is essential to EXTREME MEATPUNKS FOREVER: BOUND BY ASH.

The music has hints of the first soundtrack mixed into all new sounds to experience! It’s still the same homey hellzone style, but there’s more to it. Each character has a slightly different battle theme that resonates more with their style of combat and personality. However there are deviations from this as well, from garage band metal to labor union-styled anthems. Discordant songs that highlight newly-developed eldritch horror, or revisit emotions left hanging from the first game, stand out among the more action-oriented songs. Round the whole experience out with a soft, soulful song with emotional lyrics and you’ve got a powerful soundtrack highlighting the whole experience.

The art style is different for every aspect of the game.

The visual work has gone through some major changes since the first game. Mecha art has gone from being vaguely humanoid geometric objects to being body horror monstrosities each unique in their own way. Backgrounds are still a mix of solid-color shapes and ASCII characters, but the battlefields are now more varied and visually interesting. The character art went through the most noticeable change. Now character portraits are more raw, less clean—everyone’s got some weirdness, but in a more expressive way. The style and design choices for characters are huge, and may be a little jarring when all is said. It’s a big change to consider since you’re gonna be looking at them for the whole game.

Stories take time, especially when they’re about being marginalized and riding meat mechs.

We pick up from the emotionally heavy ending to EXTREME MEATPUNKS FOREVER and enter the sequel in equally heavy terms. The writing is raw, direct, and honest about its subject matter. Perhaps now more than ever do we need a story with morality as clear cut as it is in BOUND BY ASH. It’s a story about the multiply-marginalized running from people who want them dead, that pulls no punches in who those people are. The narrative early on reminds the player that nobody can be trusted, that the police are there to enforce state violence, and that our worst enemies sometimes live inside the depths of our mind. All of this is filtered through the setting’s familiar yet strange Meatworld, where even the things we recognize as mundane are far from it.

Content warnings are extremely important in media such as this, where the narrative will lead you into heavy and dark topics. All too often we have to deal with vague warnings on ESRB or PEGI ratings and possibly finding spoilers to games to find out the exact nature of the content we may be exposed to. BOUND BY ASH makes it a point to bring up content warnings before they happen, giving you time to cope with them and decide if you’re mentally in a place to handle that. Trauma, and the things that trigger trauma responses, are often present in games with heavy stories and I’d count it as a point in EXTREME MEATPUNKS FOREVER: BOUND BY ASH‘s favor that there are warnings in place to allow players to gauge how ready they are to process those topics.

“Art is political, don’t let your art get co-opted by fascists”—Heather Flowers

Talking about representation is almost a dead horse considering that I could summarize it as “more of the same from the first game!” That’s a wholly true statement and also a positive thing. Instead of talking about representation let’s talk about the political message of the series: Fascists, their agents, and their sympathizers are evil and do not deserve anything more nuanced than your fist to their face. The series starts with a black man being harassed at a bar and having to fight for his life, and the unfortunate truth is…that’s the life of many marginalized people in every country. The characters are from a town named Sundown, which is incredibly on the nose. By necessity, the EXTREME MEATPUNKS story lacks the subtlety of other games and stories—sometimes a brick is too subtle and maybe even a truck doesn’t hit hard enough. Sometimes the audience willfully ignores the message, and as a niche genre MEATPUNK is meant to ensure you can’t. As Heather Flowers writes, “There are times for clever metaphors and there are times to punch a fash’s lights out and we live in the second time.” 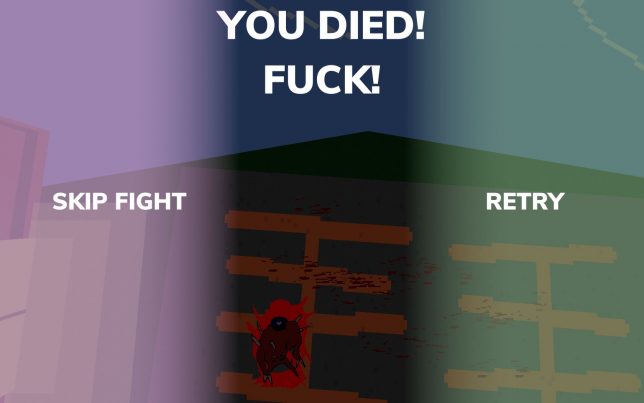 You can opt out of some of the weaker points of the game.

I spend an entire article typing up what’s good, so now I gotta get to the short and sweet about what’s bad. To start, it’s a heavy story that starts heavy and gets heavier; there’s certainly fun and jokes, but it’s always followed by disaster. The writing specifically is centered around trauma, surviving oppression, abuse, and coming to terms with yourself. Gameplay is just a tuned up version of EXTREME MEATPUNKS FOREVER, and that means it’s still just an underwhelming component of the game. You can skip combat anyway. The art shift between games is rather jarring, showing a very different style and tone for each character. Some flaws are exclusive to the sequel, some carry over from the previous game, and they may be a tipping point to your enjoyment of this game. 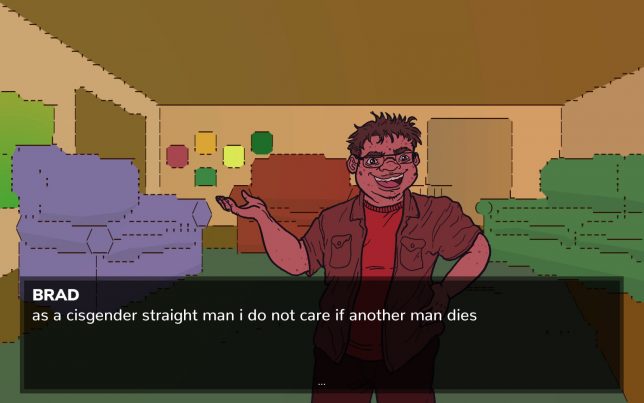 Do it just to learn the context of this scene.

EXTREME MEATPUNKS FOREVER: BOUND BY ASH is a game that expands upon its prequel, has a lot to say, and will say it without restraint. It’s a game with a consistent and well-structured narrative, designed with a clear message in mind. If you like punk media, visual novels, body horror, and stories that discuss real world issues, you should go purchase EXTREME MEATPUNKS FOREVER: BOUND BY ASH. It’s a game based mostly on narrative, focuses around emotionally charged topics, and the story keeps escalating. This may not appeal to many who want a funny, romantic, or otherwise more light-hearted story. It’s not for everyone, but I think it’s an important game to experience. 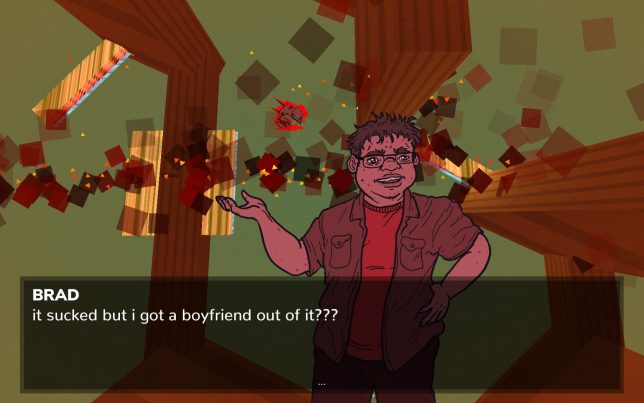 See you in part three, Brightfall!

Diana's going to Anime Expo 2015, and you won't believe what she has planned!