Her Interactive continues to amaze me. After making 30 or so games in 14 years, you’d think they’d run out of creative talent and energy ten times over, and that every new Nancy Drew game would be an obvious clone of the previous one. But they consistently deliver new and interesting games, to the point where I pre-order every single game they make, and I have yet to be disappointed.

Nancy Drew: Tomb of the Lost Queen is Nancy’s 26th adventure. This time, Nancy is in Egypt, working as an archaeology assistant for Kingston University. This is about the tenth time in her teenage life that she’s been hired to work overseas; I’m pretty sure that, by now, she has the most impressive resume ever.

The dig team has just found a previously unknown tomb. Could this be the tomb of Nefertari, Egypt’s legendary lost queen? Answer: Yes. Duh. Reread the game’s title if you don’t believe me. Of course, the tomb is full of puzzles and traps, and even a curse which wiped out a previous expedition in the 1940s. Nancy has to dodge danger, sabotage and hieroglyph puzzles on her quest to find the sarcophagus of Nefertari. 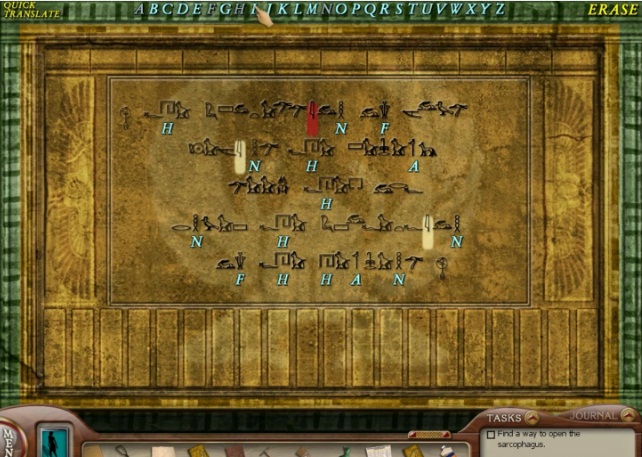 The first thing about the game that caught my attention was the graphics. The game screen has increased from 800 by 600 to 1360 by 768. The series has upgraded to widescreen HD? Count me in! The change in graphics quality is immediately noticeable, as characters and background art are much prettier and more detailed than ever before.

The interface has also changed. Nancy’s inventory is now at the bottom of the screen, as opposed to being in a separate inventory menu. Nancy’s task list and journal have similarly been made more easily accessible. These are small changes that newcomers to the series won’t notice, but they all come across as carefully chosen and expertly utilized, in order to make the gameplay experience go more smoothly.

And what a gameplay experience it is! I had seven hours of fun. Well, maybe more like three hours of fun and four hours of me wandering around, confused. I’m not very good at these games. Still, the various puzzles and things were all nicely planned out, so that the game’s environment got bigger and more expansive, the longer you played. What starts off as “this is kind of a small tomb with nothing inside it” turns into “this is kind of a large tomb” as you discover all the hidden passageways and puzzles. 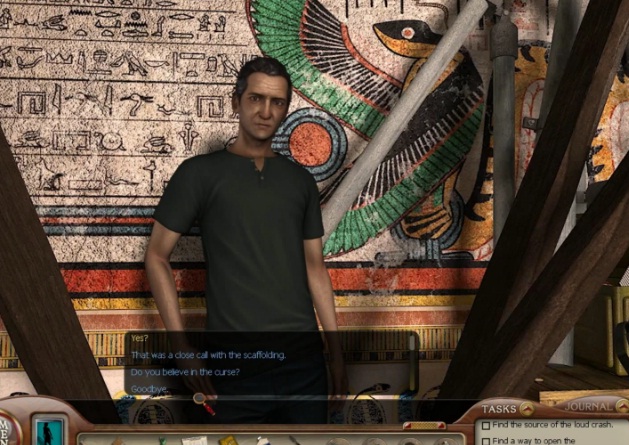 It seems inevitable that whenever a series goes on for an extended time, the fans start to get nostalgic for the earlier, better games. They stop asking if Game X is good in and of itself; they start asking if Game X is good, in comparison to Game Y. I think Tomb of the Lost Queen does a good job if you submit it to the nostalgia test. If this same game was released ten years earlier, between Ghost Dogs of Moon Lake and Secret of the Scarlet Hand, it wouldn’t stick out like a sore thumb. It would fit in quite nicely, and it might even be considered a notch above one or two of the other games.

This game strikes me as the first game in the series after Ransom of the Seven Ships to be mainly puzzle-based, as opposed to mystery-based or horror-based. I’m usually a sucker for puzzle games, but I have to compliment the game on its non-puzzle elements, too, such as the suitable background music, the plot progression and the character interactions. As usual, there is a lot of humorous dialogue in this game. Good and interesting conversations are so prevalent in the Nancy Drew series that it seems the developers would be challenged to write boring dialogue.

All in all, Tomb of the Lost Queen is a perfect example of why the Nancy Drew series is so great. The puzzle/mystery/adventure series keeps delivering one solid game after another. They’re not afraid to try new things, and all the various little improvements spread throughout the game come together to form a superior gaming experience. I know I say this every time, but I can’t wait to see what Nancy’s next adventure will be like.