I have a feeling I walked in through the wrong door here. Michael Gray is and always has been the GameCola resident Nancy Drew fan/expert/fanfiction writer extraordinaire. A new Nancy Drew game comes out, Michael plays it, writes the review, makes the video walkthrough, pens the guide on GameFAQs, and is cast in the next game to play the role of Hidden Photograph #7. I’ve never even played a Nancy Drew game before, and I definitely don’t have the qualifications to join the Nancy Drew clue crew. Me being here and trying to offer some sort of critique about a Nancy Drew game would be like the Miami Heat starting the team’s water boy because his uncle once played college basketball and leaving LeBron James on the bench. Still, while I might not have Michael’s resume and know absolutely nothing about Nancy Drew herself, the Her Interactive series of games, or the books the series was based on, I do know one thing: a good game when a play it. And the latest Nancy Drew title, Nancy Drew: Ghost of Thornton Hall, is just that. 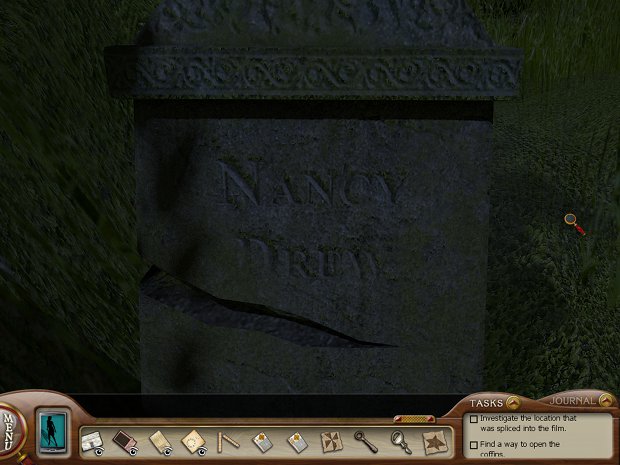 I’m totally serious when I say I knew almost nothing about Nancy Drew at all prior to this game. I was vaguely aware there was a series of books in the kids’ section of my library when I was younger, but I never ventured over there that frequently because everything was sticky and smelled like pee. Having absolutely no idea what to expect, I started up the game, and prepared myself for what I thought would be Scooby Doo-type wackiness with a dash of Encyclopedia Brown-type mysteries where I’d have to figure out who stole the last cookie. Instead, the game starts with Nancy getting woken in the middle of the night by a friend named Savannah, telling me there’s been a kidnapping on some haunted island and she doesn’t want to go because even though she’s some sort of ghost hunter, she’s afraid of ghosts. Might want to reconsider her profession, but whatever, I’m sure I can handle some fake ghosts. I arrive on the island, explore a little bit, and within five minutes decapitate Nancy Drew when I tried to open a door and a scythe swings down at me from the ceiling.

I killed Nancy Drew? Within five minutes? I THOUGHT THIS WAS A KIDS’ GAME! The game gives me a little message telling me I had made an “error”, and I was like, yeah, I suppose decapitating the main character qualifies as a bit of an error on my part. This wasn’t the end of the madness, as it wasn’t before long that you get sucked into a world of dark, horrendous family secrets and a floating specter starts eerily singing at you, floating closer and closer until it explodes in a burst of flame, shrieking as it dissipates. Nancy says something along the lines of “huh, that was weird” and I came to the sad realization that she was either suffering from some sort of adrenal gland disorder or was infinitely braver than I am, seeing as how I was now hiding underneath the covers and waiting for Nancy to solve the case on her own.

Surprisingly, the game actually does a fairly decent job establishing a spooky atmosphere for something that doesn’t allow any blood, guts, or gross out scares.  The story as a whole was pretty good, especially the earlier portions that build up the suspense and the backstory of the Thornton family. Unfortunately, things begin to fizzle out near the end and the later portions of the game are far less interesting than the early stuff. The ending in particular was disappointing, and really pushes on what I’d let a game get away with when maintaining my suspension of disbelief. I know this was based on one the novels, but I got the distinct impression the author didn’t quite know how to wrap things up, and the ending was essentially the least satisfying aspect of the whole game. Still, even during the weaker portions of the story, the writing is fairly strong and manages to carry the game through to the end. There is a nice job alternating between tense, serious exchanges and light-hearted jokes and the conversations between Nancy, her best friend Bess, and boyfriend Ned were always entertaining. Although, I am a bit concerned for Nancy’s sake as to why her best friend and her boyfriend appeared to spend two consecutive nights together since they kept answering the same phone together at the same time regardless of how late I called them. Maybe Nancy isn’t as good of a detective as I thought. 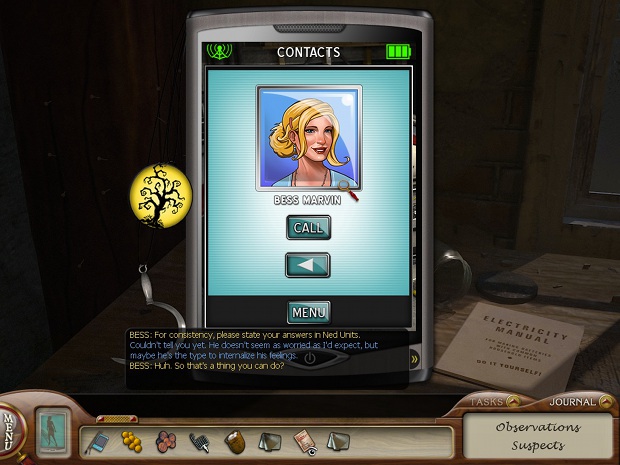 While she may not be that great at figuring out when her boyfriend is up to no good, Nancy has a significantly better mind when it comes to puzzles. Without a doubt, the most impressive feature of Ghost of Thornton Hall was the puzzle quality. You can start the game on baby mode or grown man lumberjack mode, and the harder mode offers no hints and more puzzles. Being a strong, tough, bearded man and having had plenty of experience in puzzle solving, I thought I’d jump right into hard mode and be able to cruise through it. The game slapped me and laughed in my face for my hubris, throwing genuinely challenging puzzles my way that forced me to think critically. There aren’t any that are really unfair, and for the most part the puzzles fall in that nice range of being challenging without being obtuse.

The puzzles in the game are divided into sort of point-and-click adventure game-type puzzles of using items on other items, and more logic-based puzzles that force you to solve some specific task. Or, I suppose it would be more accurate to say the game is divided between logic puzzles and retracing your steps for the twentieth time because you overlooked the one item you need to solve the point-and-click adventure puzzle. You start off in a fairly small area, but this grows over time meaning back tracking takes longer and longer the later you get in the game. One item in particular is nasty to find, forcing you to search a small corner of a location you really have no reason to go to and only shows up if you are facing a specific direction.

The logic puzzles don’t have this sort of frustration and are clever and well varied. There are some simple ones that always appear in these kind of games, and using smaller shapes to assemble some bigger shape must be mandated by law to appear in puzzle games, because I swear this is like the tenth time I’ve solved this. Luckily, there are a lot more (and more challenging) puzzles to solve, including figuring out a password by using hints on grave markers or rearranging a large stained glass window so all the colors match up. The game does an excellent job of making it known as to what you have to do but not holding your hand to make sure you get to the solution without getting lost. I do kind of wish there were more puzzles, as the total run time will most likely only top in at around seven hours or so, but what is here is high quality. 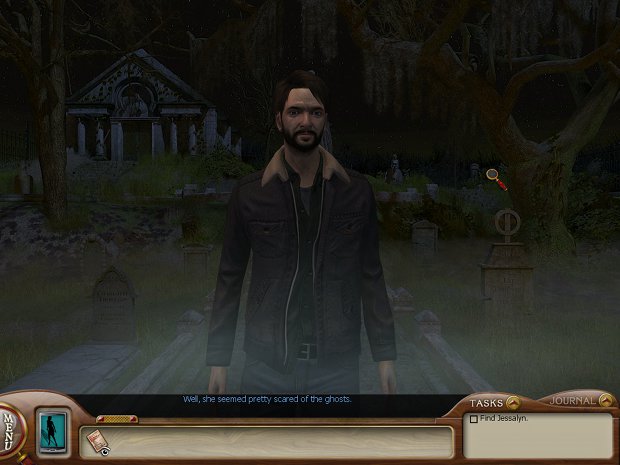 While it does have a couple of minor issues, overall Ghost of Thornton Hall is a thoroughly satisfying experience that you can get at a bargain price. While the book series might be geared towards a younger audience, the games seem to be more of a fun-for-all-ages endeavor, meaning anyone that isn’t a grumpy curmudgeon should be able to enjoy this. If Ghost of Thornton Hall is any indication, Nancy Drew is a strong adventure series and worth checking out regardless of your age. I might need to check out and see what else Michael has recommended, because this was the most pleasantly surprised I’ve been at a game for a long time.