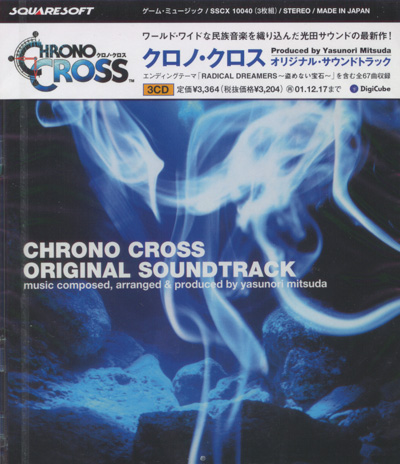 Chrono Cross. Normally in one of these “… of the month” sections I would write about the game, why I liked it, and other such things. This time, however, things are a little different. I am not writing about the game itself, but the soundtrack that goes along with it. The music composed, arranged, and produced by Yasunori Mitsuda is among my favorite of all time of any genre. Each track perfectly represents the atmosphere of the area.. and even if you haven’t played the game, when you hear the soundtrack you will feel as if you are traveling through small and large towns, through mysterious forests, over the ocean in ships and into volcanoes, and even through the depths of the ocean. Tracks such as “Time’s Scar” and “Star-stealing Girl” are among the greatest of the collection, and stand far beyond the musics of other, similar games. Even if you haven’t heard of Chrono Cross (which is impossible if you’ve read this entire issue) you should pick up this soundtrack, or at the very least (or if your mommy won’t give you her credit card to spend 30-40 dollars on imported Japanese music), download a few tracks. It’s worth it. Trust me.