Hey everyone! Welcome to The Ten Reasons, the article where I discuss ten reasons why I like or dislike a game. This month, I’m bringing you Part Two of my discussion of The Legend of Zelda: Twilight Princess. (Click here to check out Part One.) There are actually going to be eleven reasons this month, because I screwed up on my numbering system. Sorry about that! 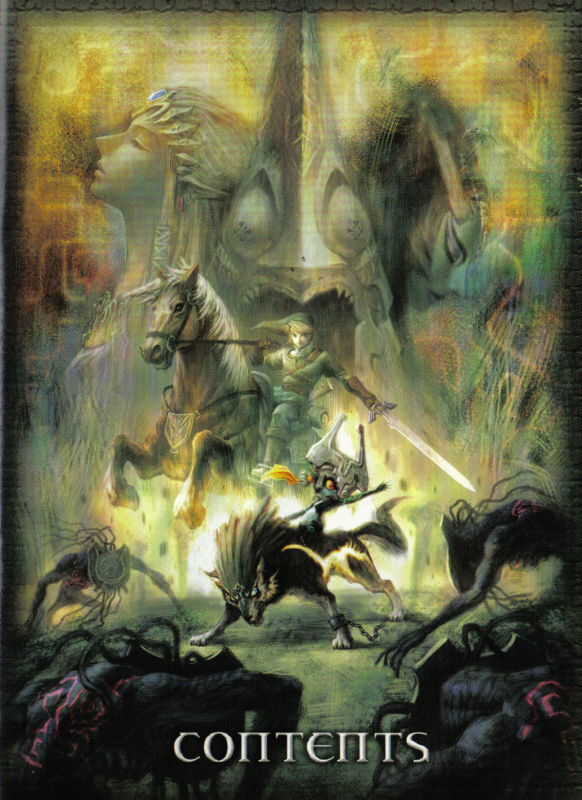 You probably haven’t seen this picture before, which is why I made it extra big. Isn’t that a rocking picture? It’s got Zelda, Zant and Midna in the background, Link on Epona in the middleground, and Wolf Link and Midna fighting a horde of Shadow Beasts in the foreground. All in all, it’s an excellent picture.

That picture is a few pages into the manual. What the heck? That picture is so good that it belongs on the COVER OF THE GAME. Don’t you agree? I think it rocks.

2. Link is a Monkey Savior 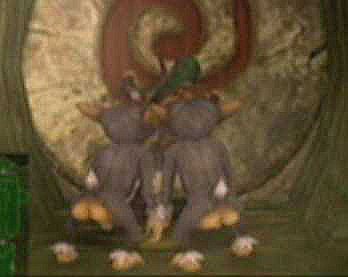 Remember how Link saved a monkey from being scalded to death by the Deku King in Majora’s Mask? Well, Twilight Princess picks up the tradition of Link saving monkeys, because in this game, Link saves about eight different monkeys from meeting an untimely death at the hands of an unseen captor.

Ook is a miniboss in this game with a penchant for smacking his butt while he waves it in your face. As you can see from the picture, he really enjoys doing this.

Most Zelda boss fights are against bosses whom you’ve never seen before. But thanks to the baboon’s butt-slapping antics, you totally look forward to eventually fighting him and stabbing him right in those big red butt cheeks. Because of this, I say, “Good job.” It’s nice to have a boss fight against an enemy you know and dislike ahead of time. No other boss fights in this game are like that, except the final boss fights. 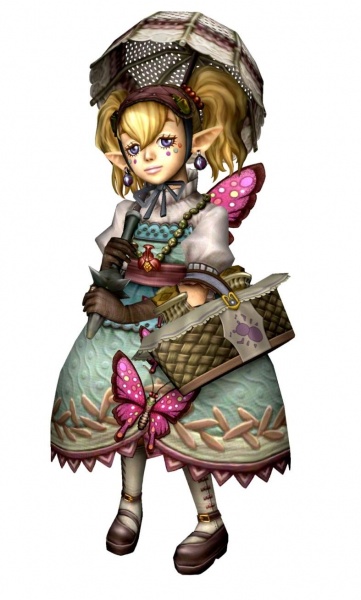 Jeez, what can I say? Agitha is the princess of the bug kingdom, wherever that is. She’s inexplicably rich, and obsessed with bugs.

For whatever reason, Agitha is one of my favorite characters in this game. Let’s hope she replaces Tingle in future Zelda games! She’s always super-happy, and I happen to think that works better with her than it does with Tingle, because she’s a little girl, while he’s a creepy 35-year-old guy. Plus, she’s more composed than any other human in the game, because she’s the only person who does not freak out when she sees Wolf Link. Go Agitha! 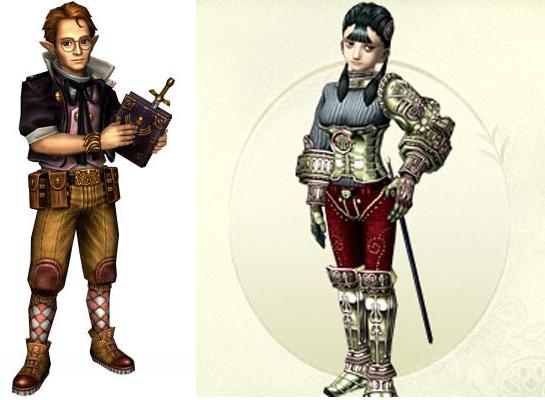 Shad and Ashei are both members of the resistance group that was set up to save Hyrule from the evil that’s conquering it. Of course, Link ends up doing all of the group’s work, but it’s nice of them to try to save the world anyway.

I don’t like Shad too much, but then I noticed his costume, which is ridiculously detailed, and rather cool, so I decided to put him in this list. Plus, I feel kind of bad for the guy, because he has spent his whole life studying the Oocca, and when Link fulfills Shad’s wildest dreams by finding a colony of Oocca, he doesn’t tell Shad about it. What a jerk Link is.

I guess Ashei also has a kind of cool costume, but what I like most about her is her personality. She’s really straightforward and tough, and I like how she ends all her sentences with “yeah?”, as if she’s ready to pick a fight at any time. I think that’s cool, yeah? You got a problem with that, yeah? Don’t make me beat you up, yeah? 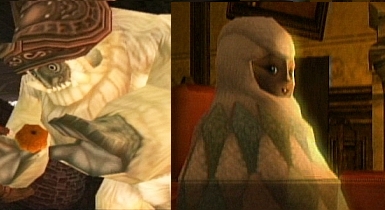 Speaking of good characters, I like the two Yeti in this game, Yeto and Yeta. Yeto is a big, dumb guy, and he’s so nice it’s hard not to like him. Yeta is his wife, and she’s just as nice, even though she tries to kill Link at one point in the game.

So I like Yeto and Yeta because they’re nice and friendly, as opposed to every other race in Hyrule. Plus, they have a really cool “I love you” moment together, which results in Link getting a Heart Container. Aw…Yeti love!

Also, they take Link snowboarding. You gotta love anyone who forces Link to leave his particular videogame and momentarily drop into the SSX Tricky world. Craziest crossover ever! 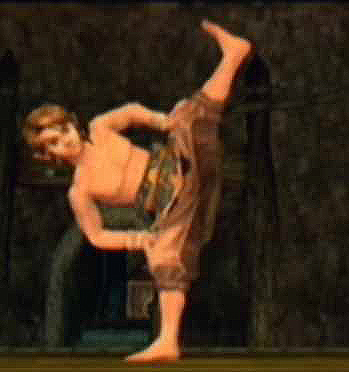 So at one point in the game, Link has to win the respect of the Gorons. How does he do it? By defeating the Dodongos and giving them access to a plentiful rock supply like in Ocarina of Time? By excelling at Goron Dancing like in Oracle of Ages?

Nope, none of those. It turns out that Link has to get the Goron’s respect by going toe-to-toe with them in a round of sweaty sumo wrestling. What can I say? If you’ve been waiting for some hot and heavy Link-on-Goron action, Twilight Princess certainly delivers it for you. 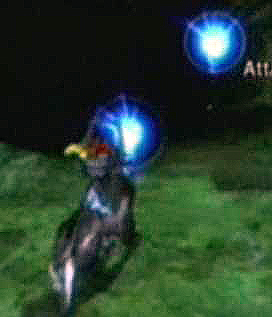 Three times in the game, you have to go on a collection quest where you travel throughout the land and try to find a bunch of golden bugs. After doing the tear collections a few times, I have come to the conclusion that these parts of the game suck. 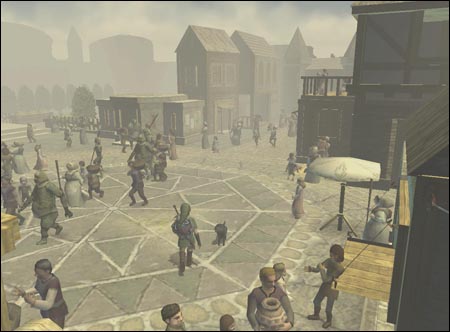 That’s an old picture of the town, but the final version looks a lot like it. Hyrule Castle Town is a big place with an awful lot of people walking around.

So…guess how many of these people you can talk to. No, seriously. Guess.

None. All those people who are walking around never have any interaction with Link. Because of this, even though the town is crowded, it feels incredibly lonely. I prefer how it is in Majora’s Mask or Wind Waker, where Link can interact with every single townsperson.

Speaking of towns with a definite lack of characters, let’s talk about Kakariko Village. It’s a pretty big town, with incredibly large houses. Only, all the houses are abandoned, and only three people live in the village.

Why is the village is so big if it’s so empty? How many other villages have more empty houses than villagers? It’s another strange decision made by the people in charge of the town layouts in this game, just like the decision to make Hyrule Castle full of non-interactive characters, and the decision to keep Fado’s house always locked. 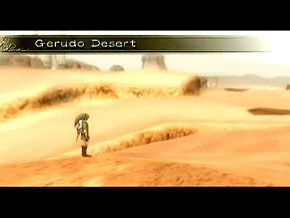 They made a point of putting all the various Hylian races into this game. Gorons, Zora, even a Sheikah. But for reasons I don’t understand, the Gerudos were not included. That’s lame. I like the Gerudos.

This game called Brink is coming out this week. I don't know anything about Brink. I was avoiding all news posts about Brink, because I thought it was some kind of racing game that offers "high-octane