If you’re reading this, then you’re either one of the six members of the GameCola faithful, a writer for GameCola, or one of my musician friends who I begged and begged to please, for once in your dear lives, read my articles beyond the first paragraph. Well, I’m rewarding you, the faithful/employee/SELFISH JERK1 with a little-known fact about GameCola. However, you’ll have to read from beyond this point, because this is where the first paragraph ends.

GameCola’s world headquarters is located inside a McDonald’s PlayPlace in Memphis. I am not making this up.2 Paul’s office is in the big room that connects to the slide, Michael and Eric set up shop on top of those Sesame Street games that teach you to count to 10, Jeddy and Sprite Monkey hold those rooms with the steering wheels, stuck in a neverending dogfight above the restaurant, and Meteo hides from the rest of us in the middle of the slide, churning out all his work for the year in a day, then climbing back up because his shadow scared him away.

As for me, I’m that annoying 6-year-old who likes to push his Hot Wheels all around the building like pushing things is going out of style. You can imagine how excited I was when I came across Mad Tracks on XBLA—a game all about controlling little toy cars around gigantic environments. It goes beyond the typical racing game, though, and there’s actually a lot of diversity in this downloadable goodie.

When you buy the basic game, Mad Tracks features 15 different games to play. About five of them are actual races. The rest of them are a diverse group of minigames. One has you play a round of mini-golf with your car as the club, and you have to push your ball into the hole at the other side of the track. The same mechanic is used for a 2v2 soccer game, set on a foosball table. Another game places your car on a tabletop and asks you to knock as many pieces of silverware off as you can before someone else does.4 One game is a simple game of king of the hill. There are a lot of game variants to be found in the initial purchase.

Local multiplayer is where Mad Tracks shines brightest. Everyone is allowed to drive like the woman they are.6

The tracks are excellent. Level design is top-notch and inspired by all of those ol’ Hot Wheels playsets that always worked in the commercials every time, and yet I could never get one single car to finish a goddamn loop-de-loop. The environments are larger than life, and make you feel like you really are six inches high. However, the backgrounds may also seem static and empty to some. There’s nothing really eye-catching about them, if you know what I mean. 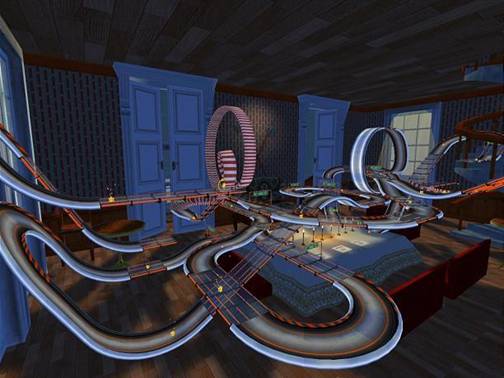 To progress through the game, all you need to do is complete each challenge in the adventure mode, and score well enough to earn a gold, silver, or bronze medal. As you progress, you’ll unlock more and more weapons to wreak havoc on the daring little toys. There’s a wide assortment of power-ups, ranging from simple missiles to ice beams (which freeze a car solid and make for terrible turning), battery drainers (which deplenish all other cars’ batteries, forcing the players to let off the gas until they recharge), and stop clocks (which slow down time for all the other drivers, letting you zip right past them). The weapons are actually really balanced, and there’s no blue shell to beat you out of your race-long held lead. You can hold as many different weapons as you want at a time, and you’re able to cycle through them with a press of the X button.

That being said, this game does have its issues. I found it too easy for the car to completely spin out with the slightest provocation. There’s also a lot of situations that can have you going the wrong way during a race, with no warning that you are actually going backwards or off the course altogether. This can be quite frustrating for new players and is a blemish that the developer must have overlooked.

The biggest complaint from my book of Mad Tracks complaints is taken right outta my book of Lumiez Live complaints. The $10 entry fee only nets you a third of the game. You only get 15 of the 45 games! You have to pay another 350 Microsoft Points to get another third of the package. The game really isn’t worthwhile with just the barebones set. In fact, my favorite stages are in the DLC. GameCola’s ruling clearly states that you have to judge a game on the content on the disc alone (or, in this case, the basic download). If all 45 games were on the original download, this game would score much higher in my book. Sad, but true.

With the recent announcement of XBLA games being delisted for bad sales and reviews, Mad Tracks could fall off the service for good, which is a great disappointment to me, as I really enjoyed this game from a local multiplayer standpoint. It’s a blast to play splitscreen when your band’s singer gets tired from hardcore sessions of Rock Band. If the complete game was available right off the bat, I’d be recommending the hell outta this game, and give it a score of around 8. Sadly, if you’re looking to just pay $10 for an XBLA gem, you should look elsewhere.7 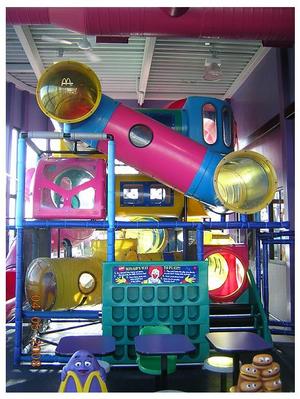 2. Make sure to leave your shoes at the door, kids!

4. How Trouble should actually be played. None of this bopper dice bull!5

5. Also, Trouble and Sorry are the same game. It’s the Pokémon of Parker Brothers. FACT!

6. Women, this is the perfect place to just be yourself.