Note: This article was originally published on G-Faqs in August 2007. Below is an edited version of the review, edited because 16-year-old Zach Rich didn’t need to PROOFREAD HIS FUCKING WORK, and because I couldn’t say words that eat away at my soul. The pictures and footnotes are all new content, too, so I’m shelling this off as actual work cause having more pages with my name on them makes balls feel really big makes me feel like a GameCola writer who’s better than Sprite Monkey who cares much for the site. Take it away, 16-year-old Zach Rich.)

I can’t BELIEVE that there are actually eight games in this series now.1 It’s another mark of just how old I am, I guess. I can remember picking up the original Mario Party back in 1999, and getting countless blisters on my hands from Tug O’ War, and still losing the game.2 My N64 controllers now have feeble control sticks thanks to that. Then came the second game and the pretty costumes. Then the third one with that talking dice guy who replaced Toad. Then all the GameCube sequels, the e-Reader game (which is very awesome, if I do say so myself), and a GBA spin-off. It’s been a long time since I last picked up a new Mario Party game, and the only real reason I got this one was because I needed a new party game, since Monkey Ball was a complete failure in my eyes.3

After the title and data screens, the very first thing you see is this worm-like guy wearing a top hat and flying at you. Drawing again from my N64 memoriam, I shouted “Chuck Quizmo!”—the game show host from the original Paper Mario. I was saddened to see that it was not the Paper-thin game show host, but a new character called MC Ballyhoo, who was introducing me to the Star Carnival. Oh, joy of joys! A carnival! Where else could I get my party game on?! The overworld concept is a bit kiddy, especially after the original had somewhat amusing stories (the MP2 theatre opening and ending were rather bloody funny to an actor as myself), but then again, it’s Mario, so we can’t really bother with that.

The other thing I noticed the second I left the Wii Channel interface was these two black bars on the sides of my widescreen TV. Eh? Wot? No 16:7?4 In a game that was released in 2007? It’s one thing that the graphics are nothing above GameCube faire, but having no widescreen display is just absurd. These days, things like that should be second-nature to throw in. It’s like a 360 game that forgot the Achievements. 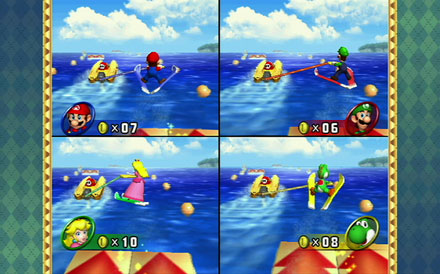 But hey! Those diamonds are so complex that you can stop playing the game to just lose yourself in them for hours….

The first part of the Star Carnival to explore is the Party Tent. This is the mode for a standard ol’ game of Mario Party in three variations: a simple everyone-for-themselves game, a two-on-two match, and a one-on-one variation, which bored me to tears. The duel mode is unfortunately the focus of the one-player Star Battle Arena mode, in which one player goes through the game’s “story.” Minigame mode allows you to play any unlocked minigames at will. Extra Zone houses eight bonus games that are slightly bigger than the standard minigames, and the Fun Bazaar is the place to unlock goodies. 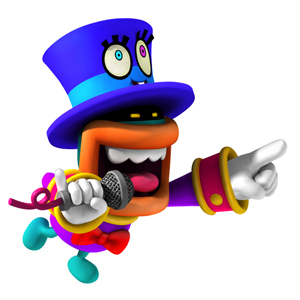 And another thing: How much alcohol did it take to replace a perfectly decent bit-character in a wonderful game with THIS ABOMINATION. WHAT THE FUCK HAPPENED TO CHUCK QUIZMO?

Let’s start at the worst part of the game. The single-player Star Battle Arena pits you against six eager foes to win a year’s supply of CANDY5 as well as the title of Superstar. Bowser crashes the party and blah, blah, blah. This is the lowest point of the game, as it’s just you competing against a sole computer player to complete the map’s objective first. I’ll lay this out here and now: Outside of MP3’s duel mode, where the maps are made for two players, Mario Party is a four-player game. No more, no less. Since minigames come at a once-in-a-blue-moon pace in this mode, the single player game is a chore and should only be played through twice to unlock the two secret characters, Hammer Bro and Blooper, as well as the unlockable map, Bowser’s Warped Orbit.6

The gameplay is standard Mario Party board game action, only with some new Wiimote controls. Instead of hitting A to hit a dice block, all you need to do is flick the controller up. Roulettes are done through a dart throwing motion, after the game reminds you to wear your wrist strap. Thanks, Nintendo!

Each of the six boards has different goals to meet in order to obtain stars, and whoever has the most stars wins the game. DK’s Treetop Temple is the classic variation. Find the Star Space, and trade 20 coins for the star. Then things get hairy. Goomba’s Booty Boardwalk is a one-way path, at the end of which is Cap’n  Falcon Goomba handing out free stars. This map seems to be more about rolling 10s than anything, or paying the dolphins to move you 20 spaces.

Boo’s Haunted Hideaway is much cooler, as the stage is a maze that doesn’t allow you to look ahead until you enter another room. Some paths lead to dead ends, while one leads to King Boo, who sells stars at 10 coins a pop. Afterwards, King Boo shuffles the rooms, and the hunt begins anew. Shy Guy plays host on a train level with cars that switch positions. Finally, Koopa sends you on a real estate quest in one board to invest money in hotels to gain the stars they hold. Whoever invests the most money in the hotel gains the hotel’s star. The maps are all different and colorful, and most of them are interestingly laid out, with a ton of personalities to inhabit them.

Across the maps are spaces and shops that award and sell you candies, which take the place of the capsules from previous games. Candy allows you to roll extra dice blocks, steal or destroy coins, or challenge an opponent to a one-on-one standoff in a minigame. Although they add to strategy, there are simply not enough candies, and earlier games have boasted many more items to play with. Also on the maps are DK and Bowser spaces that trade on and off as players land on them. Where DK helps you earn stars, Bowser is out to steal from you and hurt you as much as he can.7

Where MP8 shines, though, is the minigames. There are 64 assorted minigames and one showdown with Bowser placed in the game in four-player (free for all), one-on-three, two-on-two, one-on-one, battle, and challenge (one-player) variations. Many of the games utilize the Wiimote as a laser pointer. A major benefit, though, is that not every game uses motion controls. This is very important, because it makes the game feel less redundant—as you’re not making the same motions over and over again, which tends to happen in Wii games—and provides for more content. Minigames happen at the end of turns, when a player lands on a challenge space, or if a player passes another player who has eaten a duelo candy. Most of them are frantic and really showcase the Wii as a party machine. Except for Wii Sports and perhaps WarioWare: Smooth Moves, MP8 has a multiplayer factor that can’t be beat. Just don’t go it alone. People in the mid-2007s were really crazy, weren’t they? 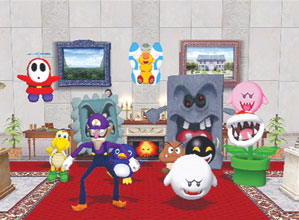 I think we can all agree that “Ebony and Ivory” applies to red and white Boos at some level.

The Extra Zone holds eight minigames (four need to be unlocked) for extending the party, including a Wii Sports-esque bowling game, a moped race on three tracks, and a puzzle game. These are fun, but nothing extraordinary. They do use Miis, placing their heads in a pair of Mario’s overalls. (On a side note, that’s something that the Mii Channel should be supporting—clothes!) The Fun Bazaar is where you go to purchase new features and extras with Carnival Cards that you earn playing Party Mode and completing the Star Battle Arena. Items like character voices, a Very Hard difficulty, music, and minigames you haven’t unlocked yet are for sale, as well as many figures to display in the figure parade, which all adds a bit of replay value to the game.

The original N64 trilogy will always stand to me as the best titles in the series. MP8, though, is leaps and bounds ahead of its GameCube brethrens and still upholds the reason this series has been around almost every year since 1999. It’s party fun, and it gets quite insane at points. If you have no friends, though, do yourself a favor and buy Metroid instead.

1. Well, actually the tenth, if you could count the GBA’s edition and the e-Reader card game, which was actually one of the best things to me about the GBA. I love you, e-Reader!

2. I couldn’t say this in the G-FAQs version, so I will here: FUCK YOU, TUG OF WAR! YOU JUST COULDN’T LET ME WIN ONE GAME OF YOU, COULD YOU? YOU ELITIST, CHILD-EATING, MAN-LOVIN’ SODOMITE!

4. Actually, it was the second you left the menu navigations, but my little 16-year-old mind couldn’t understand the concept of time/space.

6. And since 16-year-old Zach Rich had no problem spoiling things, who else is pissed that Lucario replaced Mewtwo? Neo-Pokémon bullshit is what that is!

7. If only Baby Mario/Luigi/Peach/Daisy/Wario/DK8 was playable. Maybe we’d be able to put Bowser behind bars on charges of taking candy from babies

8. Also, whoever thought of baby characters (and Daisy, for that matter) appearing beyond SMW2 should be dragged out into the street and shot.

9. The original article had a bunch of silly bullet points here that no one cared about. Nothing to see there—just WALK AWAY.

Time to face the change.