Hello everyone, and welcome to “Inside the Guide,” the only article on GameCola that discusses writing guides for videogames. Or, as I like to call it, “The Greatest Column GameCola Runs, Next to the Other Column I Write.” I asked the editors if I could make that the new name of this column, but they said that’d cause troubles with the GameCola archives. So it looks like I’ll be sticking with “Inside the Guide” for a while longer. This month, in a surprisingly informative column, I’m going to go through the Pajama Sam series, and explain the various complications the games pose for the average guide writer.

Pajama Sam: No Need to Hide When It’s Dark Outside 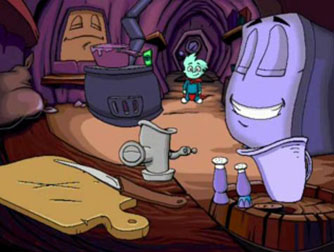 Everything in the kitchen sings.

For those of you who don’t know, the Pajama Sam series are games for 6-to-11 year olds that follow the adventures of child superhero-to-be, Pajama Sam. Each game involves Pajama Sam finding three or more missing items, which are randomly placed throughout the game. That way, you can replay each game a couple of times, and it will be different each time.

Now, this “random item placement” scenario makes for great replayability, but it is pure torture for guide writers. How can I write a guide telling the player what to do when the items switch places randomly? After all, I can’t tell people how to get the lunchbox if sometimes it’s underwater and sometimes it’s by the well.

The solution? I had to play the game over and over again, until I saw every single possible outcome, and then I listed all of them in my guide. I ended up with a LOT of sentences like “If so-and-so is here, do such-and-such, but if it’s not here, then it’s la-de-da, which means you’ll do do-re-mi instead.” About one third of the guide is me listing out the possible game outcomes and alternative outcomes, which involves a lot of needless repetition and makes things sound way more complicated than they actually are. So as an additional solution to the problem, I made a quick list of every item in the game, and where they can be found, all of which was quite straightforward and made the guide seem less confusing. 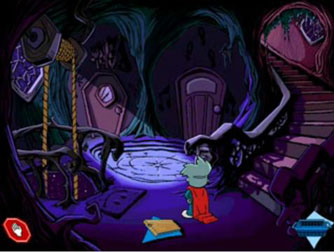 Mini-confession: No matter how many times I restarted the game, I never got the scenario where the mask was underneath the dancing furniture. I restarted the game about twenty times, but I always got the scenario where the mask was on the carrot. I ended up copy/pasting the instructions on what to do from the game’s help file for that particular game outcome. I worried that someone would call me out on writing a guide on how to beat part of the game I never played, but no one ever did. 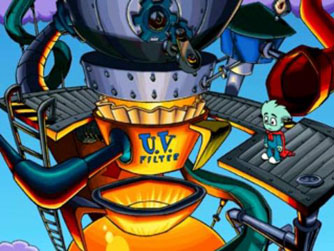 This is where sunlight comes from.

The second Pajama Sam game is just like the first, except much bigger, with more complicated possible game outcomes. This made writing a guide much, much more difficult. If you don’t believe me, take a look at the simpler, non in-depth explanation of how to find the Y-pipe in the game:

“Y-pipe will either be in the vending machine in the lunchroom (which means you’ll have to use coins from the rainbow in the test room to buy him and when he gets stuck, use a can of earthquake (from the case in the warehouse basement) on the can opener and then throw the can at the vending machine to get him loose and then replace him) or he will be in the employee lockers (which means you’ll have to use a crank (from the reception area) to blow away the fog, then you’ll have to find the combination to the lock, which is Foster Boondoggle’s birthdate, which you can get it from Mr. Someone the Personnel Manager if you give him an apple, grown in the test room from apple seeds from the trashcan in the lunchroom).”

That’s the simpler version, mind you. I give a more detailed version of what to do at the appropriate spots in the guide. Over half my guide looks like that. See what I mean when I say that a random game set-up results in a lot of unnecessary explanation? No matter what scenario you get, half the guide is immediately useless to you. 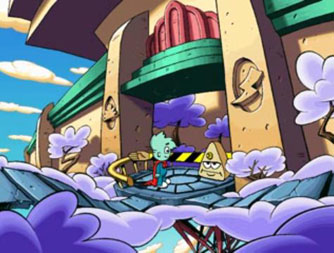 You shall not pass.

On a brighter note, this game comes with a special selection feature in the options menu. This feature lets you choose four of the eight possible outcomes the game has, if you so wish. This was a major boon for me, because it meant I could choose the game outcomes, instead of replaying the game over and over again, and hoping that the Gods of Chance would give me an outcome I hadn’t seen already in my quest to describe all possible game outcomes. This was a major improvement that allowed for the guide-making process to proceed much more quickly.

Pajama Sam 4: Life is Rough When You Lose Your Stuff 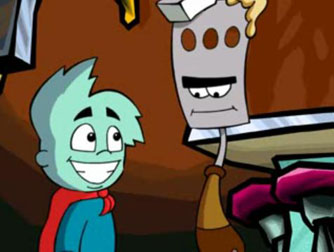 This scene scares me.

Pajama Sam 4: Life is Rough When You Lose Your Stuff is the first (and last) Pajama Sam game made after Atari purchased the company that made the first three Pajama Sam games. Or at least, that’s what I’m guessing. The game has all the signs of being made by a different company, such as hiring a new voice actor to play Pajama Sam, not including classic Pajama Sam characters like the Carrot, and switching from a non-linear layout to a linear layout.

These changes aside, I am willing to forgive the game because it has one of the greatest moments in the entire series: The Sock Musical.

Writing a guide for this game was so, so much simpler than the other games. Like I said, this game has a linear layout, which means that every time you play the game, it’s exactly the same. No more items appearing in random locations. No more needless repetition. All I had to do was play the game once to write a perfect guide for it! It was my favorite Pajama Sam game to write a guide for.

It seems to be my readers’ favorite guide, too, because I’ve gotten more e-mails about this guide than all the other three games put together. Most are from parents who are thanking me for writing the guide, because I saved them the embarrassment of looking stupid in front of their little children. I always smile when I get those e-mails. Protecting parents from being outwitted by their six-year-olds is what I do best! Just like Pajama Sam, I’m always around to save the day! 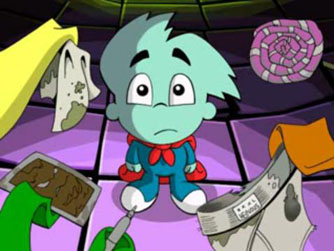 This scene scares me even more.

So that’s what I have to say about the Pajama Sam series. Writing guides for them is more trouble than you’d think, isn’t it? On the other hand, it’s a lot easier to write guides for Pajama Sam games, because they’re for younger children and are therefore much simpler, with problems that are much easier to figure out. Do the pros outweigh the cons, though? I never figured it out!