Advergaming has a horrible reputation. I can’t, for the life of me, begin to understand why. I’m serious, here. There’s such a negative perception in the general gaming audience when any game is made to try to push another product. If there’s a food, or a brand, or a license tacked on to a quick, cheap game, then it must immediately be considered shovelware filth that needs to get the hell off of my lawn, unless its name is Cool Spot.

I fail to get the hate. I fail to get this hate because of the fact that I’m a corporate tool I’ve had plenty of good experiences playing advergames, specifically in this console generation. Hell, while gaming with friends, I dusted off my copy of Big Bumpin’ and had a little drunken multiplayer mayhem with that little gem. I don’t think it’s any secret that the 2007 Burger King trio of games is a slight guilty pleasure of mine. Are they masterpieces of game design? Hell no. Were they cheap, memorable, and fun to display in my collection? Absolutely. What about those free Doritos games that have been popping up every few years? Not only are they free, but they’re really, really good. Doritos Crash Course is still something I visit every now and again to score myself a lower time. Remember Yaris? Well. No. No one remembers Yaris. Yaris was horrible. We don’t speak of Yaris. I will stop talking about Yaris for the rest of my life from this point on, right now. 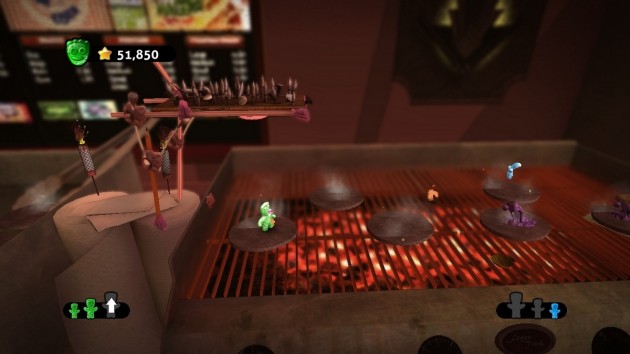 When I saw the details of World Gone Sour, and how it was an advert for Sour Patch Kids, where others scoffed and rolled their eyes, I saw a $5 platformer that could be fun to play. If anything, it was insanely cheap, it had a few Achievement points, and I might get a laugh or two out of how horrible it was. Has World Gone Sour placed itself amongst the pantheon of XBLA and PSN greats like Shadow Complex, Ms. Splosion Man, Journey, or WipeOut HD? Pfffffffffffft. Did I waste five dollars on a horrible game? No. I got a review copy. I got a decent platformer that was well worth the cash that I (figuratively) put in. And that makes me satisfied.

The first thing to note is that this game takes an instantly darker tone than one might think a game about candy should have. The title screen depicts one Sour Patch Kid shanking another Sour Patch Kid. I hope I never have to write that sentence again. Throughout the game, Sour Patch Kids will be melted, frozen, chomped in half, impaled, sacrificed, all in the name of what is the ultimate goal for any food product: getting eaten. Of course.

What we see throughout World Gone Sour is a platformer willing to take some cues from the past. A major feature of the gameplay is the task of rounding up other lost and forgotten Sour Patch Kids, and using them to hit switches and targets scattered throughout the stages. This feels like the egg-throwing mechanic from Yoshi’s Story, and allows for some additional diversity to the platforming. A major side-mission in every level is to find eight special ways to die (melting, puncturing, and so on), either by serving up one of your own lives, or by tossing your little followers into harm’s way. (Luckily, they come right back to life, and there’s no penalty to you when your followers die.) 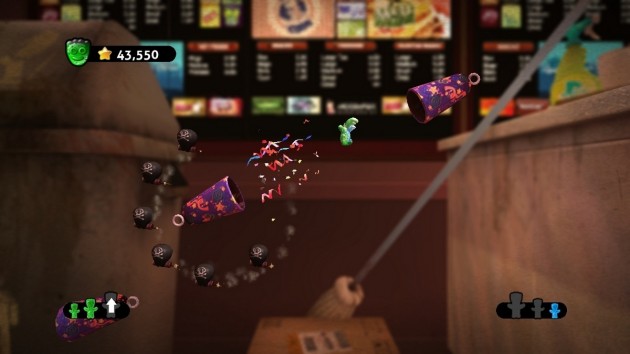 The controls, while basic, feel a little floaty at times, and there were many instances of me falling off a platform when I wanted to jump, resulting in controller-throwing deaths. Luckily, the game keeps the checkpoints coming at a good clip, and there are plenty of extra lives to gather to keep the game going. Although there aren’t too many levels, the ones present are long enough to make the entire experience a good two-to-three hours, if you’re the type that likes to muddle around and find as much as possible.

Visually, there’s not much to complain about in World Gone Sour, but there isn’t much to write home about, either. There are no major set pieces within the levels that stuck out as memorable, even though the setting itself, the cluttered and dirty floor of a movie theater, is a cool concept in itself. Narration and one-liners are supplied by Creed Batton of The Office fame, who makes good on the script for the first half of the game, until you reach the mid-point, where the lines are reused, annoying, and not nearly as funny as in the first part of the game. World Gone Sour goes slightly sour by the middle of the game; the difficulty, surprisingly, ramps up an insane amount, forcing players to really time every jump and throw correctly to get through each obstacle in your little green candy’s way. It’s just a shame the presentation couldn’t keep up with the difficulity. I had a lot of fun with my time playing World Gone Sour. It’s quick, it’s cheap, it’s sour, and it’s sweet. It’s everything the candy it is selling…is. And hell, there’s an over-the-top Sour Patch Kids music video courtesy of Method Man at the end. I didn’t know I ever wanted that before, and yet, here I am. That’s the joy of advergaming. I didn’t know I wanted to gorge myself on Sour Patch Kids until now. I also want six-pack abs by the end of the summer. Only time will tell if World Gone Sour will get in the way of my acting carrier. But the outlook is oh, so sour.

Six hours long, containing solutions to all 135 puzzles in the game.