What do you get when you mix together elements from The Lord of the Rings, classic point-and-click adventure games, and that annoying guy from high school who always quoted Monty Python all the time? Well, you get this: 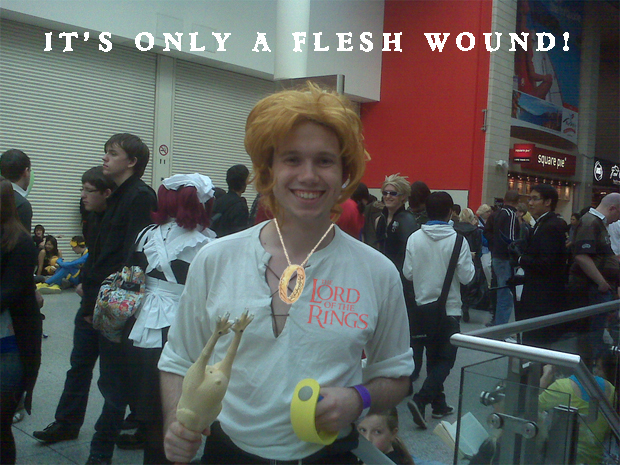 You also get this:

The Book of Unwritten Tales is a German point-and-click adventure game following a young gnome who wants to be a mage, an elven ranger who really needs to put more clothes on, and possibly the most obnoxious “hero” character this side of Brian Basco. The story’s part parody and part sincerity; your main quest is to find and retrieve a magical artifact that can grant wishes in order to keep it away from those who would do ill with it, and you play alternately as all three characters (plus a little fuzzy sidekick named “Critter”). It’s a game based on clichés, but is also knows when it’s being clichéd and makes fun of itself for doing so. At the same time, the characters (well, most of them) and story are heartfelt and endearing, and there’s an underlying sense that the game didn’t really need to rely on self-depreciating humor and bad pop-culture references, but felt it had to in order to appease its target audience.

Let’s go into that a little right now, because if I don’t get it out of my system I’m going to scream. 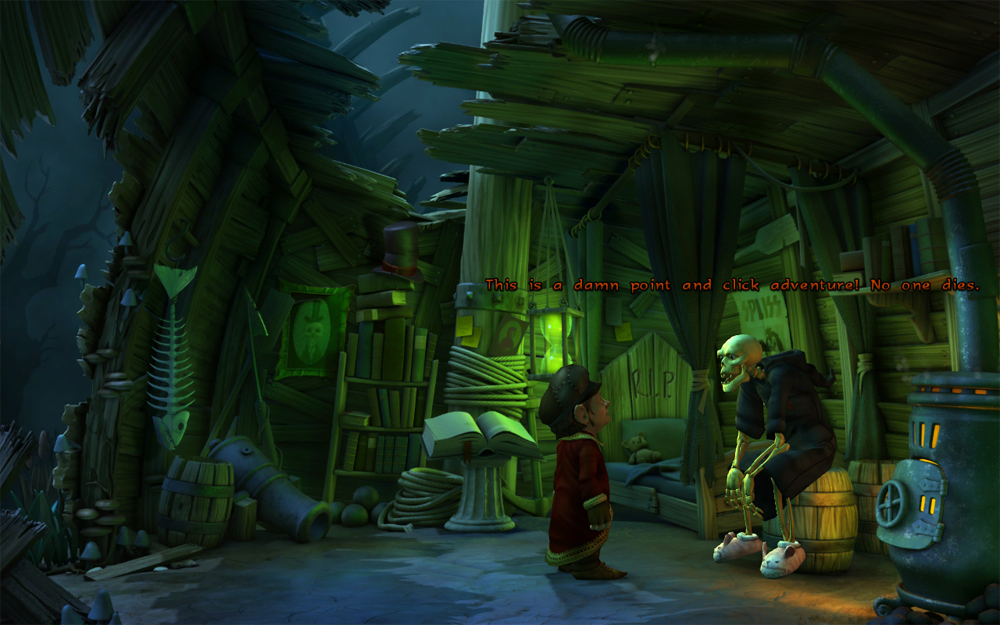 The game’s inconsistent tone does NOT work in its favor. Characters are introduced as tropes and rip-offs, and while they don’t always end up that way, there’s a lingering assumption that you shouldn’t really grow too attached to them—as much as you might want to—because they’re not meant to be taken seriously. The same can be said for the story: it starts off with the gnome character, Wilbur, being asked to carry a magical ring to some far-off place, and the game says almost literally, “We’re ripping off Lord of the Rings! Isn’t that terrible?! Please laugh.” The pop-culture references, too, are just sad. The ring, for example—at one point, a hologram figure pops out of it, telling you that you are its “only hope.” The game expects you to find this hilarious just because it’s a reference to Star Wars, not because it’s actually clever in any way.

These awesome jokes don’t even always make sense within the context of the game. The elf character seeing but not recognizing a stone box that’s clearly the Ark of the Covenant is inoffensive, if not gut-busting; but when that same character uses a whip to climb up a wall, and starts humming the Indiana Jones theme, that’s a different matter. These characters constantly reference things they can’t possibly know anything about—things that are from the real world, not their own  fantasy universe—breaking the fourth wall in uncomfortable ways and again making us question how much we should invest in them. 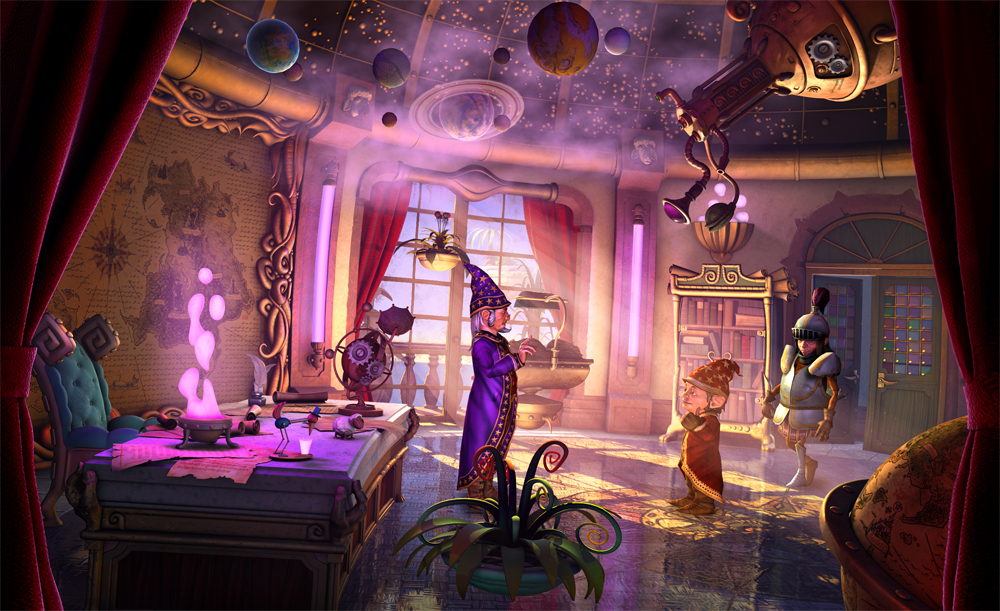 Issues like that pervade the whole experience of Unwritten Tales, but they definitely don’t ruin it. The gameplay mechanics build on the adventure game genre and streamline them, making the game much more fluid and fun to play than it would’ve been if it were made in the 90s. For example, you can press the spacebar to highlight all the hotspots in any given area. This isn’t the first game to do that, but it’s always a godsend, as it keeps you from having to run your cursor over every.last.pixel to make sure you didn’t miss the one goddamn loose board you have to click on to make the bird fly away from the fish. (I’ll never forgive you for that, Monkey Island.) Moreover, the game’s hotspots only indicate new or essential interactions; once you’ve examined an object, either you can interact with it in some way, or the hotspot disappears and you’re done with it forever—which helps narrow down possibilities when you’re trying to solve a puzzle. We never once had to use hints in the game, and that’s not because it was supes easy—it’s because it’s supes well-made, giving us little opportunity to get stuck “trying everything on everything” in order to progress. It’s always clear what tasks you need to accomplish, but not how you need to accomplish them, and you’re always able to figure them out on your own, without having to reference a walkthrough and mutter, “oh, that’s stupid.”

Unwritten Tales also throws in some creative, let’s say, “inter-genre tasks.” (We’re intentionally avoiding use of the word “minigame” here.) These aren’t tacked on, pointless things that distract from the main gameplay; they have a purpose to them (and also no high scores). For example, there’s a potion-making puzzle that plays like actually mixing a potion, frustrating explosions and all. There’s a part where you have to chart a course on a map, following someone’s real-time Dad-like directions like “go straight until you hit the big river” and “go left at the second-tallest hill, the one that used to have all those goats.” They add to the game in ways you wouldn’t really expect, but end up welcoming. 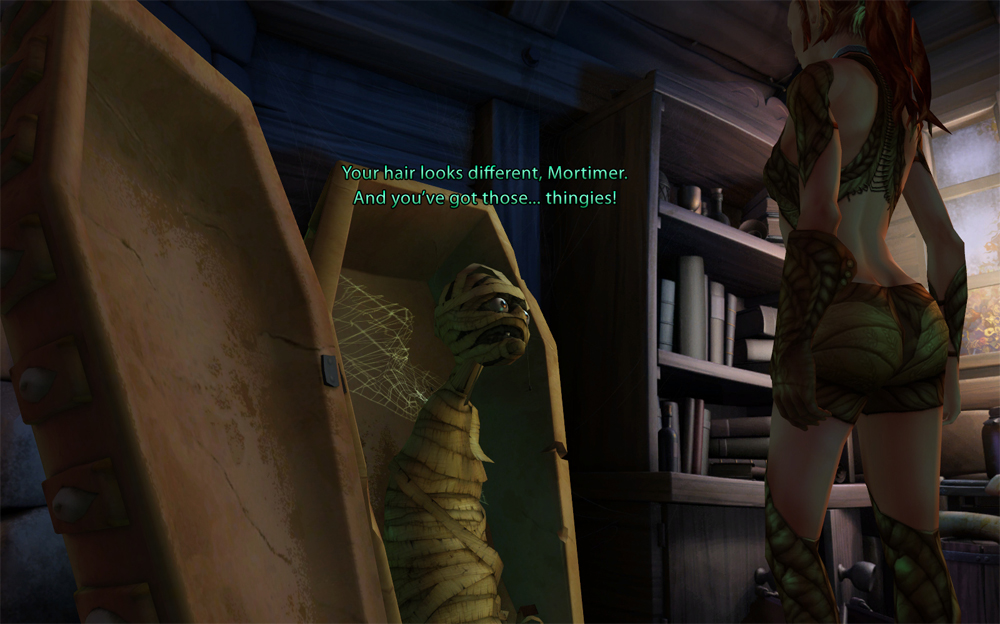 There are so many things that this game gets right. The graphics—particularly the environments—are detailed and vibrant, and they really make it feel like a high-budget, triple A adventure game, the likes of which we haven’t seen in years, if ever. It’s long enough (about 15 hours) to fit in a huge amount of story and puzzles—though, unfortunately, the game ends abruptly at the tail end of what feels like a filler puzzle, as though the developers realized they hit some arbitrary time limit and needed to end the game now, whether it made sense to or not. The translation is one of the best we’ve seen from an originally foreign-language game; unlike Ceville or Runaway, you can’t really tell that the game wasn’t originally written in English. Except for one character, anyway (the aforementioned Brian Basco doppelganger, of course), whose godawful voice actor makes every line sound like it was read by someone who’s not quite sure how words work.

The Book of Unwritten Tales has its issues, but it’s still a mostly great, mostly funny adventure game. If you’re looking for an alternative to the standard Telltale adventure game—you might actually want to look somewhere else, because this plays just like a Telltale game, only with even more wackiness. If you like adventure games (and love pop-culture references), check out the demo; and if you think they’re boring, then this won’t change your mind. To put it in words the game itself might use, the Force is only kinda strong with this one.

I really like RPGs. They're probably the best waste of time since counting ceiling tiles.