It would be gracious of me to bring to the fore my obvious bias in reviewing Hector: Badge of Carnage, Episode 1: We Negotiate With Terrorists (vomits). In several ways, the game conspired against me. Firstly, it is published by Telltale, which is an instant sign of wearyingly familiar adventure gaming and cloying, unfunny humour. Second, the humour carries a distinctly British bent, and as a British bender myself I resent all efforts to curry my favour by way of broad northern accents and jokes about kebabs. Third, and most importantly, comedy videogames are never funny. This is a maxim that has proved true 100% of the time, and anyone who says otherwise is just pretending.

“Stop wanking over your own opinions and tell us about the game,” I hear you cry (a psychological affliction that I have received years of therapy for). As I’ve already explained, it’s a Telltale game. That should be enough to go on. There, the review’s written itself. You’ve all played a Telltale adventure, and you know by now that they are all exactly the same, and defy criticism. You click on stuff and either talk to or combine it. That is the sum and extent of the gameplay in Hector, and you have seen it all before.

Hector ambles about the featureless British town of Clappers Wreake, solving rudimentary puzzles that are rendered astonishingly easy by the fact that you are, effectively, told what to do at every step of the way. I shall illustrate the game’s approach with a made-up example. 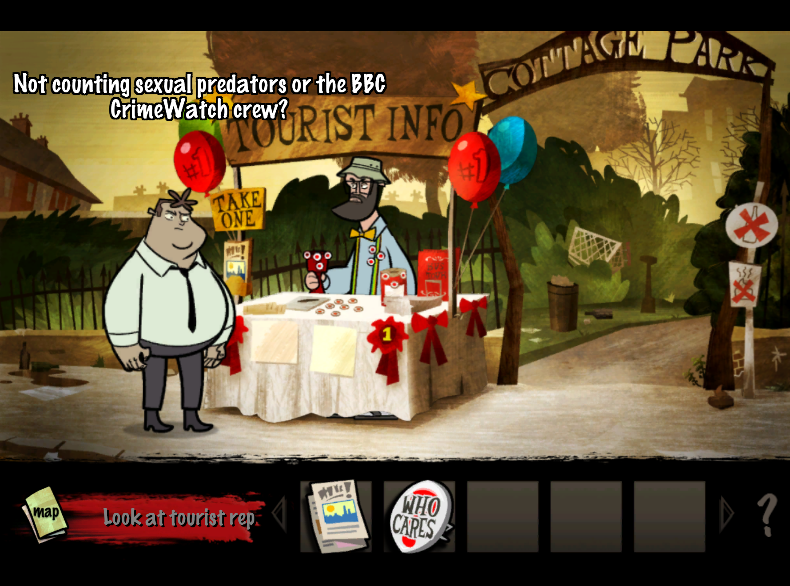 Imagine, if you will, that Hector (our vociferously dislikeable hero) is standing on a log. His aim is to lose his footing and tumble to the ground, or “fall off it.” Here is how HBOCE1WNWT (vomits) would present this situation.

Hector: “Gor, bladdy luv a fackin’ duck, I’m only stuck on a big fackin’ bugger of a log, y’twat.”

Hector is a coarse Briton, you see. You have just read an accurate simulacrum of every joke in the game. Anyway, back to the (already tortured) example.

Hector: “If only I call fackin’ fall off of this log, like I fell off yer mam after I shagged ‘er this mornin’.”

If by this point you have still not figured out the objective, Hector will continue.

Hector: “I need to ‘urry up and tumble off this fackin’ log, y’sod.”

At which point the hint system will inform you “Click outside of the log to fall off it.” As a game, it’s closest to one of those old kids’ storybooks where you could click on the sun and it’d smile at you, or something. Only with a lot more uses of the expression “beef curtains.” 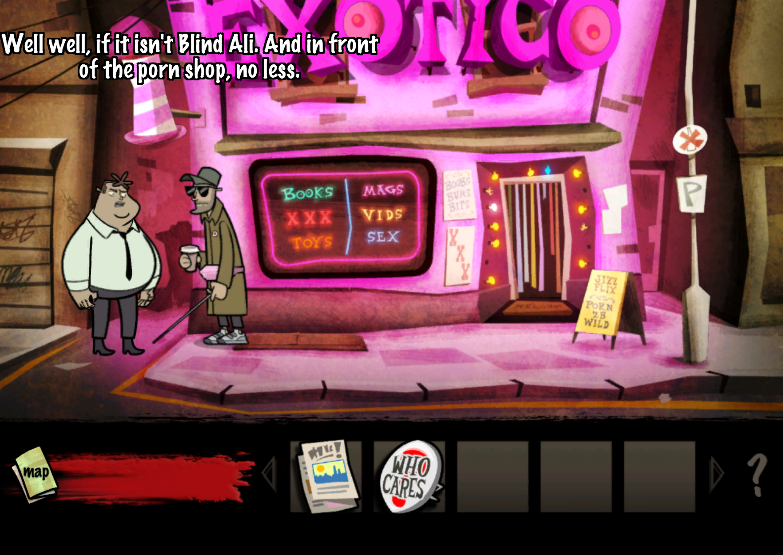 The voice acting is lacklustre throughout, and sounds like it was recorded in someone’s downstairs toilet. The samples are of noticeably low quality, with crackle aplenty. I’m almost certain they used the wrong takes for certain lines, so misjudged is their timing. The animation doesn’t impress, and uses remarkably few frames, giving the same movement effect as the bizarre Monkey Island HD remakes. When Hector walks, it’s like he’s floating along. It calls to mind low-budget Flash animation, and doesn’t exactly flatter the game.

After completing Hector, I had no desire whatsoever to revisit the character or play any of the subsequent episodes. It underwhelms in every respect, and doesn’t even look good (unlike the similarly 2D and supremely atmospheric Puzzle Agent, Telltale’s best series). As Hector would say, “cobblers.”

A cheapskate's guide to discounted and free games. This article: LittleBigPlanet, Borderlands, $7 games, Tower of Heaven and trading sites.