Well, this was totally unexpected. Do you realize how long this game has been out for?

Scott Pilgrim vs. The World is finally getting an online multiplayer patch so you can play online with your friends! —assuming any of you actually remember GameCola’s Best Licensed Game, Best Multiplayer Game and Best Downloadable Game of 2010.

…and you can play as Scott’s roommate Wallace Wells, too! He’ll probably just be another sprite-hack like Knives Chau, but the more the merrier. 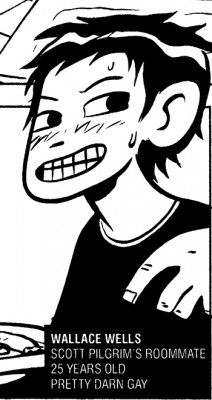 Well, we’re going to have to pay for the online multiplayer patch, which is the one thing the game was legitimately missing to begin with. That’s like charging us for a calculator, and then charging us again if we want to use scientific functions. No, I know what it’s like—it’s like if GameCola contributor Mark Freedman sold me some jeans but I had to pay him extra if I wanted to open the zipper.

I think we used that argument once in a debate, or something.

The “Online Multiplayer+Wallace” DLC will cost 400 Microdollars too much and will be available on August 14th! So if like me you’ve been hankerin’ for some spankerin’ with your online mates, you can finally experience a full console freeze together! Yeah, I sure hope an extra patch is released that fixes the, well, full console freezes.

For a while I’ve been considering a solo Let’s Play of this for GameCola. Maybe now we can stretch to a four player?