There are a lot of Flash games and videos on the Internet, and while some of them are absolutely brilliant, some of them are utter trash. It’s all too easy to be scarred for life by some innocent-looking Flash video, and there are so many better things to do with your time than waste it on a lousy Flash game.

You should be prepared for what’s out there, is all I’m saying. Each month I’ll compile a list of Flash games and videos, do a super-short review of each, then pat you on the head, give you a lollipop, and send you out into the Internet as a wiser, more prepared person.

Here’s a crash course for my ratings:

5 = A personal favorite. This one is worth spamming all your friends about.

2 = Decent, but lacks anything that makes it really stand out, like, say, flaming monkeys.

1 = Don’t bother. Lamer than the final “boss” of Gradius.

0 = Your time would be better spent scooping out your eyes with a forklift. Heck, after watching, you might want to do that, anyhow.

& So We Love Playstation 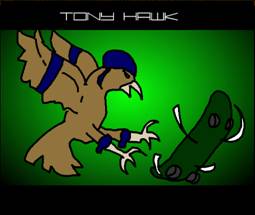 Description: In a blatant rip-off of an idea that I swear I called dibs on in middle school, a young woman rattles off the names of various PlayStation games (accompanied by silly pictures) in a parody of Billy Joel’s “We Didn’t Start the Fire.”

Review: The idea is a good one (obviously, because I came up with it first), but the singer’s voice doesn’t have enough oomph to make the song as catchy as it could be, and the humor is equally un-oomphy. Yuck, did I actually just write “un-oomphy”? Sorry. There’s not really anything wrong with the video, but you’ll probably only get a few small smiles out of it here and there. (Just like this column!)

Verdict: 2/5: A favorable alternative to staring at a blank computer screen.

A Tribute to the NES

Description: A montage of scenes from various NES games set to the song “Born to Be Alive” by Benny Benassi.

Review: Irony is funny, y’see—somebody dies or gets knocked out in every scene (while “Born to Be Alive” is playing—you get it), and a few of the deaths are surprisingly entertaining. Even if you’re one of those creeps who doesn’t enjoy watching the deaths of others (weirdo), it’s a good nostalgia-fest, and it’s a great opportunity to challenge your friends to a round of “Name that NES game.”

Verdict: 3/5: Worthwhile, unless you’ve never played an NES game, in which case you’re either too young to be watching videos on the Internet in the first place, or an uncultured yokel. My money’s on the second option.

Length: Super-short (about a minute or less).

Description: A duel for possession of the last Nintendo Wii in stock.

Review: This is just plain fun. It’s clever, the music is catchy, the action is good, and it’s got a ninja. ‘Nuff said.

Description: A guy sings about the failings of the PS3 to the tune of “How to Save a Life” by The Fray.

Review: Sometimes the only way to express your disgust for a videogame console is through the magic of song and Flash animation. It’s a pretty good parody, and the visuals add to the song, but it helps to know what he’s singing about. (Hint: The PS3.)

Verdict: 4/5: Players who are not familiar with the PS3 take a -1 penalty to Enjoyment.

Wii in a Nutshell 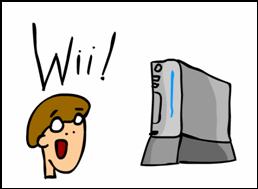 Length: Super-short (about a minute or less).

Description: Random characters rambling on about the Wii.

Review: This video makes me feel as though I’m listening in on the lunch conversation of a bunch of middle school gamers. Except they’re not complaining about how that one PlayStation song was a total ripoff of my idea, so the feeling isn’t entirely authentic. The voices are sped up and silly, and it’s surprisingly decent stupid humor all the way.

Verdict: 2/5: If you need your stupid humor fix (and, really, why else would you be here if you didn’t?), this video isn’t a bad choice. I mean, you could do worse. Have you read any of Meteo’s reviews lately?

That’s all you’re getting this month. Now, come over here so I can pat you on the head and hand you a lollipop. And if you’re quick about it, maybe I’ll upgrade that lollipop to a Zagnut bar.

If it came down to it, I could probably be described as quintessentially girly.  While clothes and boys aren't quite the only things I care about, they definitely occupy a large portion of my thought