“Give me back my turkey!” Alli screamed.

“Not before you give me back that woman!” replied Tom.

It had been like this for days. No matter what game they were in, somehow Tom and Alli managed to set each other off. The game would begin amicably, with Alli and Tom working together and accomplishing the first few tasks that were set before them, but then something would happen to completely destroy their camaraderie. One of them would accuse the other of hording power-ups, or one would hit the other with friendly fire, or sometimes one of them would make an innocuous comment that the other would misconstrue, most likely due to the latent hatred fuming beneath the surface from the last fight, and the hostilities would begin anew.

After escaping from Barbie Horse Adventures, Tom and Alli had been plunged into Diablo. Their adventure had begun well enough, with Tom as a Warrior and Alli as a Rogue, venturing into the catacombs below Tristram to destroy the evil that dwelt there. It wasn’t long, however, before they were arguing over which of them had landed the killing blow on a monster and was therefore entitled to the treasure it had dropped. Soon, they were scrambling over each other for every last gold piece and bickering over whose turn it was to create portals back to town. After they had completed the first four levels they were fortunately sent to a new game, but unfortunately that game was River City Ransom, and they were soon back to squabbling. Rick had hoped that they could take out their aggression on the endless hordes of ridiculously named goons, but it wasn’t long before they were ignoring their foes completely and beating each other over the head with chains and trash cans, stopping only to retreat to the malls to replenish their health with sushi and burgers.

Now the fighting had shifted to a colossal scale in Rampage. Tom and Alli as George the Giant Ape and Lizzie the Dinosaur, respectively, had been warring through city after city, competing with each other for who could knock down the most buildings and devour the most objects. Now they were holding each other’s power-ups hostage, and the situation seemed like it would come to blows soon. Rick was worried, to say the least, but turned back to his console, attempting to get some work done. A sudden CRASH and a scream brought his attention back to I.D.E.A.S. Alli lay in a heap of rubble, dazed, with Tom roaring over her.

“For crap’s sake man, you two have to stop or you’ll never get out of their alive!”

“Stay out of this, Rick! You don’t know what she said abou–OOF!” Alli had swiped her tail into Tom, knocking him into a building. The melee then began in earnest with claws raking, teeth biting, and limbs flailing as the city tumbled around them. Tiny digital people screamed and ran for their lives, while tanks and army men tried in vain to halt the destruction. Rick could only look on in horror as they ignored all of his protests to stop and continued to batter each other mercilessly. Finally, while attempting to grab a nearby car to use as a weapon, Tom was sucker-punched by Alli, depleting the last of his health, and reverted to his tiny non-mutated form. Before Rick could stop her, Alli sent her foot slamming down on Tom, crushing his small human body.

The fire suddenly left Alli’s eyes as she realized what had happened. “Ohmigod…I…I’m sorry…I didn’t…didn’t mean to….oh god….” Alli stood there, in shock, while the full impact of her actions struck her. She had killed him, murdered him, and for what, a few extra points and a grudge that started over something as meaningless as the right to some digital currency? She could hear Rick yelling at her from somewhere far away, but she was too deep inside her own guilt for it to register. This was unwise, as she also failed to notice the slight whiiiirrrrrrr in the sky above. 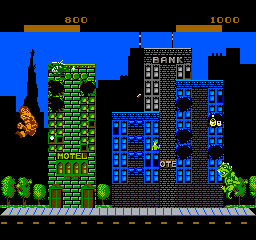 bellowed Tom, as he plummeted from the sky, leaving behind the blimp that had returned him to the game. Alli’s world exploded into stars as Tom brought his fists down on her skull, slamming her into the pavement. She struggled back to her feet, relieved, confused, and consumed with rage all at the same time.

“Tom? How? I thought you were dead! And that HURT, you son of a bitch!”

“It’s the NES port of Rampage, and that means infinite lives. And it means I can do this!” Tom leapt at Alli, bringing his fists down upon her once again. Exhausted, Alli now returned to her human form, and before she could run for cover Tom quickly scooped her up and flung her across the city, smiling to himself when he heard the satisfyingly wet smack of her body hitting a building. Scanning the skies, he saw the blimp carrying her back to the level and braced himself for her inevitable strike back.

“BRING IT ON, BITCH!” Tom shouted back.

Rick had nearly had a heart attack when he saw his friend fall, and another when Alli followed suit, but they had killed each other and resurrected so many times now that Rick had lost count. All he could do was look on in horror as the duo of monsters kept destroying each other over and over again. The more he entreated them to stop the more vicious they became, seemingly just to spite him. At least, he thought to himself, they’re managing to still get through the game. It was true. Between tossing each other into buildings and tearing off girders and chunks of concrete to bludgeon each other with, Tom and Alli were destroying the cities around them and progressing through the game, if unintentionally. As the final building in the current level fell, Tom and Alli were enveloped in a flash of light and I.D.E.A.S. loaded a new game. Thank goodness, thought Rick. Maybe we’ll get a nice non-competitive game that will give those two a chance to cool down.

Rick’s heart sank in his chest when he saw which game had been loaded. It was the single most competitive game he knew of, the one that had been responsible for the most cursing and broken controllers between Tom and himself since childhood. Only one of them is making it out of this one,he lamented.

As Rick gazed mournfully at the screen, the Mario Kart 64 title screen faded, and the first race began.