What happens when you take Mega Man 8, offer two different playable characters, rearrange all of the levels, bring in some new bosses, throw in a huge scavenger hunt, and adjust a bunch of other things? Why, you get the game that Mega Man 8 should have been: Mega Man & Bass. 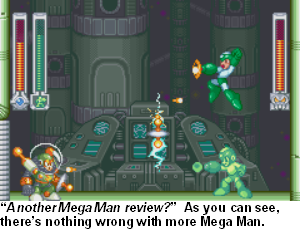 I think that covers about everything. That’s my review. You can go home now.

No, really; MM&B is closer to an expansion pack or a glorified ROM hack of MM8 than a wholly original game (though “original” is rarely the best word to describe a Mega Man game). If you take out all the negative stuff from my review of Mega Man 8, you’re basically left with a partial review of Mega Man & Bass. OK, so you’re also left with only about two paragraphs, but that’s beside the point. And that’s all you really need to know unless you’re a Mega Man fan or one of my groupies. Casual readers, stand back, ‘cuz I’m about to crank up the verbosity.

In Mega Man & Bass, a robot named King decides that humans are inferior to robots (took him long enough!), so he starts gathering an army of robots to take over the world. The plot differs a little bit depending on who you select as your playable character: you can choose between dependable ol’ Mega Man and his rival, Bass, who is like the Star Wolf to his Star Fox; the Waluigi to his Luigi; the… Roy to his Marth; the…uh…Nathaniel to his Meteo? If you play as Mega Man, you set out to put a stop to King’s shenanigans for the sake of mankind; if you play as Bass, you set out to show everyone who’s the real King of the Robots, and mankind might inadvertently get saved in the process.

At first, Bass seems like the obvious choice for this game: he has huge advantages over Mega Man because he can double-jump and fire a continuous stream of bullets in seven different directions, which would be rock-awesome if it weren’t for the fact that the drawbacks that supposedly balance Bass make him virtually unplayable. Unlike Mega Man, Bass cannot charge up his blaster or shoot through walls or shoot while running (and let’s not even get into what happens when he tries to chew bubblegum while running), and his shots do half the damage, and the ability to slide has been replaced with a dash that is more difficult to execute than an adorable puppy in the electric chair.

What this means in terms of gameplay is that Bass can breeze through tricky jumps and swarms of weak enemies, but the game just ends when you get to anything that takes more than a few hits to kill. Even with the rapid fire, larger enemies take forever to destroy, and the bosses are practically indestructible because the rapid fire doesn’t make a difference against them and your blaster only does ONE damage at a time. Plus, if you can’t consistently pull off the dash to dodge out of the way, you might as well give up. Only the handsomest of people can beat this game, because you can’t win if you’re not dashing enough.

At least the shop feature makes things easier—you can upgrade the power of your blaster or buy damage-reducing armor—but the hilarious irony is that the equipment that makes it barely possible for Bass to stand a chance against the bosses isn’t available until halfway through the game. Oh, irony. You kill me.

Did I mention there are no Energy Tanks in this game?

All things considered, MM&B is almost certainly the hardest game in the classic series, and it’s not just because of Bass (though he’s largely to blame). For one thing, some levels seem explicitly designed for one character over the other—usually, the mindset seems to have been, “It doesn’t matter how absurd that jump is for Mega Man as long as Bass can make it,” but there are unreasonably difficult sections for both characters. Unreasonable, I tell you!

Additionally, you see a smaller area of the screen than was originally intended: Mega Man & Bass was ported from the Super Famicom, so Capcom decided to crop the edges of the screen instead of making everything unpleasantly tiny. This usually isn’t a big problem, but sometimes there’s no way to tell whether the area above you is a ceiling filled with spikes or a bag full of kittens until you’re jumping into it.

Furthermore, most of the bosses are quite challenging, and some are downright unforgiving. From Dynamo Man, who can fully recharge his health in the middle of the battle if you don’t act quickly enough, to a flying tank that fights you over a bottomless pit as you hop across an endless string of moving platforms, MM&B brings out some of the most difficult and innovative bosses to hit Mega Man (both the series and the robot) in a long time.

Considering how much they recycled from MM8, it’s amazing the game feels as fresh as it does. A handful of bosses from MM8 return with slightly or heavily modified attack patterns, and all the new bosses seem to have been created as replacements for MM8 bosses so that Capcom could reuse as many enemies, obstacles, and backgrounds as possible. Ground Man, for instance, gained a little ground from Sword Man; Magic Man claimed Clown Man’s carnival; and Pirate Man plundered Aqua Man’s submerged sanctuary. The stage layouts are different and some graphics have been tweaked, but familiar backgrounds and enemies diminish the novelty—yes, I mean you, rocket-powered penguin.

New bosses means new weapons, though, so both Mega Man and Bass can pick up such goodies as a flamethrower and a sticky mine that you can continue to aim after firing. There’s a bonus stage where you need to use your special weapons to solve puzzles (Yay puzzles! …Even really obvious ones.) that will win you screws to spend at the shop. Many of the weapons—along with abilities such as Mega Man’s slide or Bass’s double-jump—are required to collect the optional (and tricky to obtain) Data CD items that are hidden throughout the stages, which contain all sorts of pointless, poorly translated info on the vast majority of bosses and major characters from the classic Mega Man universe.

That’s right! As a reward for spending an infuriating half-hour trying to get your robo-dog Rush to dig up a CD that’s buried in a section of ground that is almost immediately destroyed by a burrowing dirt-fish (don’t ask), you are treated to this scintillating information about Ground Man: 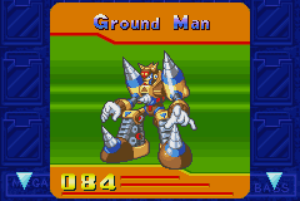 See how all that frustration paid off? Find enough CDs and you’ll learn that Flash Man dislikes “Commercial for wig,” and that Dr. Light’s bad point is “Douchie.”

Collecting CDs does add to the replay value, but the way stage selection is handled takes a lot away. This time, you start with three bosses to choose from, and each boss you defeat opens up one or two additional bosses you can fight. Now, if my math is even remotely correct, there are only 352 different ways to play through the game (compare that to the 576 of MM8 or the 40,320 of most other Mega Man games), but in this particular game you’d be a fool to stray too far from the “best order” recommended by any given walkthrough, especially if you have any plans of ever beating the game.

What I have left to say about MM&B can be summed up pretty quickly, so let’s rapid-fire through it, shall we? Thankfully, everything that ruined MM8 (voice acting, snowboarding, etc.) is omitted entirely; I like that they actually show you what your new weapons do when you gain them; the graphics are as pretty as MM8’s, and to my delight, they are not as obnoxiously colorful; I’m pleased that they went back to the sound effects from MM7 because they sound more like Mega Man and less like Nick Jr.; and while there are a few songs that I think are really good (the Game Over music is wonderfully heartbreaking), for the most part, the soundtrack is like a good undershirt: fitting, but unremarkable.

At the very least, MM&B feels more like an authentic Mega Man game than MM8 does. MM&B is enjoyable enough—using Cold Man’s weapon to ride a block of ice across a floor of spikes is always a thrill, and questing after the Data CDs is a satisfactory diversion (even if the rewards are silly), and playing as Bass when he’s at full power almost makes up for what you have to suffer through to get there—but the game’s uneven difficulty is a definite turnoff, and the replay value is very low after you’ve collected all the CDs and beaten the game with both characters (which is quite a feat, let me tell you).

To conclude, here’s what the Data CD has to say about Mega Man & Bass: 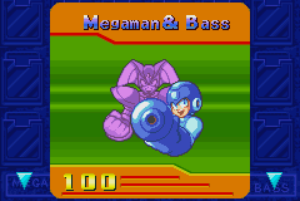 GameCola friend and contributor Britney Brimhall passed this along to me, and I thought I'd pass it along to the entire world, via this blog: Hello, This is Britney Brimhall. I'm the Chairman CEO of