I love Enchanted Arms for the same reason I love movies like Mazes and Monsters, They Saved Hitler’s Brain, and Timemaster (which, although it has the most boring name, is easily the number one so-bad-it’s-good movie of all time)—the story, dialogue, and voice acting are so amazingly, profoundly, hilariously awful that I’d trade my signed copy of Bio-Dome away for the chance to experience it for the first time all over again. It’s one of my new favorite videogames of all time, and I absolutely, 100%, think that  you should avoid it at all costs. 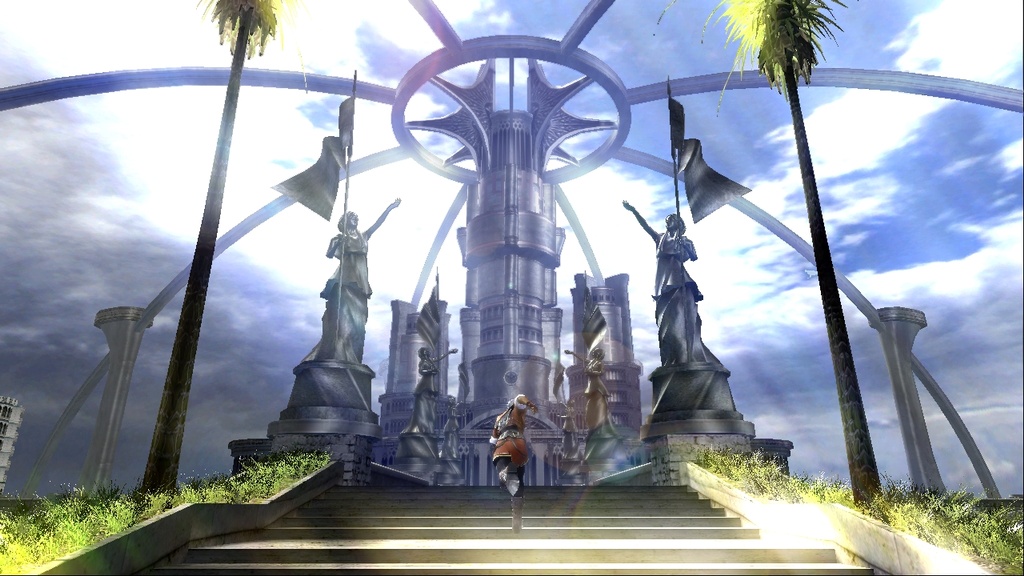 To clarify: Enchanted Arms is a terrible game. It’s freakin’ awful. The voice actors speak like they only just recently learned our Earth languages, and they did so by watching anime fandubs on YouTube. It’s like the programmers did the voices, and they weren’t even the programmers for this game. The dialogue maybe—MAYBE—was OK in its original Japanese, but it was clearly translated by someone who hasn’t read anything besides erotic EarthBound fanfiction since dropping out of high school. I had to mute the music in some parts of the game, because it was so repetitive that it was actually painful to listen to. The game has those horrible quests where you have to talk to everyone in town to find the ONE DUDE who knows how to progress the plot, who I’m convinced never actually exists until you look up his location on GameFAQs. There’s also grinding, and I hate grinding. Just considering the game objectively, every single one of its attributes besides the (pretty fantastic, actually) visuals are completely laughable, and the game is something like a 2/10.

But it’s because it’s so laughable that I had the goddamn time of my life playing Enchanted Arms.

You need to be able to have fun with it. If you go into the game expecting it to be dumb—but not wanting it to be dumb—then you’re just going to be wasting your time and your $8. The only way you’re ever going to enjoy this game is if you’re the kind of person who makes drinking games out of The Eye of Argon.

So hey! What is this game, anyway? It’s an RPG. Possibly a strategy RPG, but I only say this because there’s grids, and you move around on them, and not because I have any clue what strategy RPGs actually are. (I’ve always avoided them, because I hate turn-based combat to begin with, and strategy RPGs appear to be turn-based combat taken to the extreme.) The game’s story follows Atsuma, a young man with an unhealthy obsession with his best friend Toya, and his battles with the Queen of Ice, who’s probably going to destroy the world or something if we don’t run around collecting the ultimate Pokémon team to defeat her. There’s actually a lot more to it than that—the game’s over forty hours long, a big chunk of which is story development and plot twists—but the tl;dr of the entire game is that you have to defeat the Big Bad and save the world. 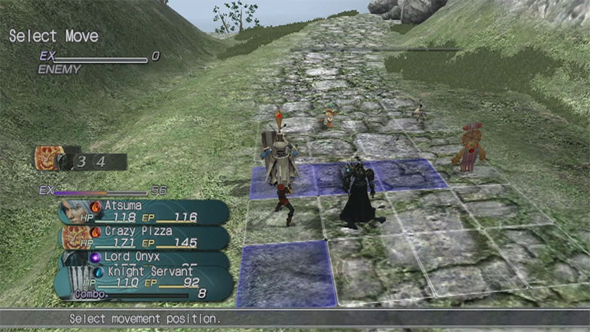 The name of the game, Enchanted Arms, is surprisingly literal. I was expecing, you know, magical swords, magical axes, perhaps a magical glaive, but no—this game actually is about a young man and his magically possessed right arm, which half the cast wants to CHOP OFF and TAKE FOR THEIR OWN. Wow! It’s incredibly silly, but everyone in the game takes Atsuma’s arm so incredibly seriously that you can’t help but either, if you’re me, bust a gut laughing whenever Atsuma says something like “Auuugh! What am I going to do about this arm of mine?!”, or if you’re anyone else, roll your eyes and get pissy.

The game can be an emotional rollercoaster, if you allow it. While you’ll only like the game ironically for the first 30 hours or so, before you know it, you actually genuinely like these people and don’t want them all to die horribly in a Saw-inspired trap. I actually, personally, even started getting into the story in a non-ironinc way a few scattered times, though the vast majority of the time I was laughing my butts off (guess I should’ve held onto them) at everything. I enjoyed this game a lot, and I hope it doesn’t matter too much that I did so at the developers’ expense, rather than because they made such a well-crafted game.

The game’s tutorial segments are as fantastic as the plot. For example: Atsuma is walking down a hallway, and when he reaches the end, there’s a ladder leading up to the next area. Then he FLIPS THE HELL OUT, because Atsuma has no idea what to do now. “Holy shit! We’re trapped!” Someone has to explain to him that you “push the A button to climb the ladder,” and before giving him the chance to test that wild theory out, they actually ask “Do you need me to repeat that?”, as if Atsuma’s short-term memory was such that he couldn’t remember the literal last thing somebody told him. And that thing was “to progress past this ladder, you have to climb it.”

So…what about gameplay? The combat is turn-based, like I said, which I find super boring. I remedied this by always having my iPod handy when playing Enchanted Arms, so I could just rock out to some podcasts and let my mind focus on them while my fingers did whatever. This was the best idea I’ve ever had. I’ve been in a bit of a phase where I’ve avoided all turn-based RPGs, no matter how interesting they’ve seemed, just because I find the slow-paced combat so God-awfully boring. Listening to podcasts while playing Enchanted Arms…didn’t exactly make the combat fun, but it made them fun enough for me to sit through them in order to progress the plot. (BTW, anyone have any suggestions for turn-based RPGs that I’ve missed out on over the past several years that I should check out? I’ll trade you some suggestions for some great podcasts.)

Anyway, combat. I don’t know. It’s on a grid, and you have to move your human and Pokémon characaters around the grid, positioning them all to maximize the damage they can do with their particular abilities. One aspect that actually did bring down the game for me here was that you can only have four active party members at a time—but this was only an issue because there were so many legitimately creative monsters I wanted to use but couldn’t find the room for, such as a two-dimensional exploding cartoon pumpkin, a little girl carrying a demonic doll, and Crazy Pizza Man, whose name, I think, says it all. I couldn’t ever even find room for the actual human characters—who all had names, personalities, and plot-essential roles to play—because I didn’t want to bother with them when I could have Odin and Sasquatch dispensing justice with me. 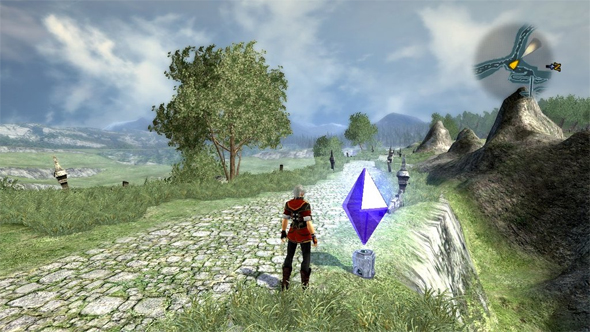 Playing the last section of Enchanted Arms gave me the same feeling I get when I’m watching the final episode of a favorite TV show. I didn’t want the game to end—and that’s the first time in a long while that I’ve felt that way about a game. Usually when I’m nearing the end, I’m excited, because I like wrapping things up, and I like moving on to something new. With Enchanted Arms, I actually found myself putting the game aside for weeks at a time to artificially prolong the game. I was enjoying it that much.

Enchanted Arms is an experience. One you should probably never have. I’m not even 100% sure it even qualifies as “so bad as good.” I think the writing’s hilarious, but I don’t know if that’s because it’s universally hilarious, or if it’s only hilarious to me because 1) I’m an editor, which means I have a finely tuned sense of what good writing should sound like, and 2) I have the worst taste ever in games. (I’d emphasize my bad taste by pointing out that Enchanted Arms is one of my all-time favorite games, but that’s a little circular. I also like Jake Hunter.)

I’m giving this game a high score, but that’s based entirely on my experience with the game, and not necessarily the experience you would have with the game. I had to force myself to put this game down, but I think you’d have to be forced to play it. I didn’t want the game to end, but you won’t want it to begin. I can go on like this for hours. I love this game, but that love will only be lost on you. I thought the game was great, but you’ll only find it grating. I think Enchanted Arms…

In case you missed our classic playthrough of this Nintendo Adventure Book, you can now listen on YouTube!