Last month in “The Gates of Life,” Render and Enrique had been captured by the not-so-helpless gnomes of Helpless Gnomes’ Island. Rivers tried to save his companions by using his fusion powers on the gnomes, but all he succeeded in doing was merging the gnomes with the forest itself and creating a crazed pack of half-tree/half-gnome beasts.

Thankfully, an accidental explosion caused by another gnome killed all the tree-gnomes in a grisly fire.

Our heroes had no recourse but to board their ship and leave the island. They’d come there to sate Render’s bloodlust, but, unfortunately, there wasn’t much left there for him to kill. They set sail, but not before a wrench-toting gadget-monger stowaway had climbed aboard their ship.

And that’s where you, the readers, came in—your votes determined our heroes’ next step. Would they seek out more creatures to kill? Would Rivers try to stop the senseless violence? Or would the little stowaway cause a big problem? Read on to see the impact your choice had on the lives of our heroes….

Render: What the hell is that sound?
Gnome: Heh heh heh….

Our heroes—having just turned most of the inhabitants of Helpless Gnomes’ Island into freakish half-gnome/half-tree beasts—were sailing away from the island in search of new adventure. Or, in Render’s case, more life to snuff out, as his new life’s goal was to kill, kill, kill. They hadn’t gotten far; in fact, one could say that they were still within swimming distance of the island. This fact would become important shortly.

What our heroes didn’t know, however, was that their ship held a stowaway from the island: the very same gnome who’d inadvertently killed all the tree-gnomes in an explosion after Rivers’ fusion mishap. His name was Clyde, and he had a surprise in store for Captain Render, Rivers Fusion, Grand Master Barbarian Mage Enrique, and Jonathan the Minotaur….

Sound: Tick. Tick.
Sound: Tick. Tick.
Clyde: Heh heh heh….
Render: Someone better tell me what the hell that sound is, right now!
Rivers: Which? The ticking, or the creepy laughter?
Render: The one that sounds like a goddamn time bomb!
Jonathan: I think you might be–
Sound: KA-BOOM!!

Jonathan wasn’t able to finish his sentence before the ship exploded.

To be more precise, it wasn’t the whole ship that exploded. Rather, a small explosive went off at the hull of the ship, causing it to sink rapidly.

Rivers: I bet now you’re wishing you’d gotten those life boats like I suggested, Render.
Render: Tell me you didn’t just blow up my goddamn ship to prove your point, Rivers.
Rivers: I didn’t! I swear!
Render: Are you sure? That’s something you’d do.
Render: Ugh, whatever. Everybody overboard! There’s nothing we can do here—we’ll have to swim back to Helpless Gnomes’ Island.

Rivers, Enrique, and Jonathan did as their captain instructed, and Render followed suit. To nobody’s notice, Clyde did as well, laughing as he dropped into the ocean. Our heroes regrouped several yards away from the ship, bobbing in the water on pieces of wreckage.

Render: We can still see the island from here. It’s a long ways off, but it’s the best we can do right now. Just keep swimming towards it; we’ll get there eventually.
Rivers: Unless we get eaten by seabears first, or something crazy like that.
Render: ?
Rivers: These are seabear-infested waters, after all.
Enrique: How do you know that?
Rivers: I can see them infesting right over there.

Rivers pointed directly behind our heroes, where, sure enough, a gang of seabears could be seen in the distance.

Seabears are exactly what you think they are—they’re bears that live exclusively in the sea. Or, technically, the ocean. They only differ from your standard bear in two major ways:

Before devouring their prey, seabears tend to sing a song about how hungry they are, how delicious their prey appears to be, and so on. An entire gang of seabears can sing such a song in unison—a song that they seemingly make up on the spot. Nobody knows how they do this.

Seabears: ♪ Some-booooody blew up their ship! ♪
Seabears: ♪ And now, there’s no way, they’ll give us the slip! ♪
Rivers: We are so dead.
Enrique: They’re just friggin’ seabears. I can take care of them.
Seabears: ♪ Oh, boy, oh boy! It’s dinner time! ♪
Seabears: ♪ That mage would taste great with a nice fresh lime! ♪

Enrique floated toward the bears. 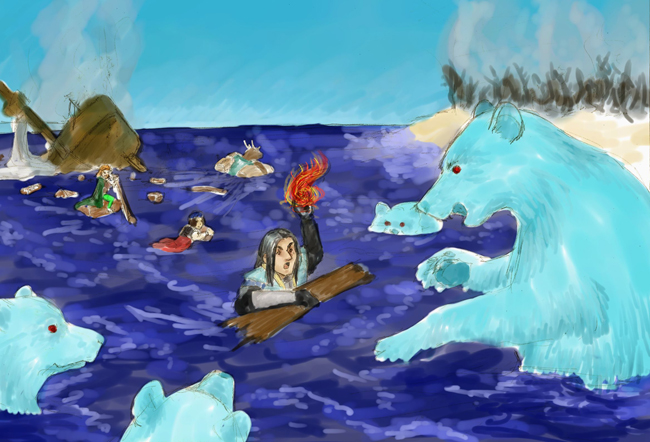 The seabears surrounded Enrique and continued singing. The barbarian-mage spread his arms, closed his eyes, and mumbled a few words. A nearby cloud started wafting toward him and the bears. Slowly. Very slowly. The bears began to close in on Enrique. The cloud continued wafting. The circle around Enrique was growing tighter and tighter, and still the cloud was slowly wafting toward them, and still the seabears were singing. Enrique was doing nothing to defend himself beyond moving the cloud with his mind. Finally, it was directly overhead, and Enrique mumbled a few more words. Before the bears could maul, they were all struck by lightning and killed instantly.

Jonathan: Impressive.
Rivers: If you’re magic’s so powerful, can’t you just teleport us to the island?
Enrique: I only know offensive spells.
Rivers: Yeah, you got that right!!
Enrique: ….
Enrique: That better not have been a pun.
Render: OK, guys, let’s get going.

Our heroes swam, and swam, and swam. Then they swam some more, and followed this up with some swimming. After a great deal more swimming, they continued to swim.

Finally, they were halfway to the island. They then swam some more.

Eventually, they reached the shores of Helpless Gnomes’ Island, from which they’d set off just earlier that day—back when they still had a ship. They lay down on the beach, panting and coughing up seawater. After several long, painful minutes, they had recuperated enough to start drying themselves. Eventually, Render broke the silence.

Render: Ugh. OK.
Render: So.
Render: WHICH ONE OF YOU BLEW UP MY GODDAMN SHIP.
Enrique: Gnome.
Render: There aren’t any more gnomes! We turned them all into tree beasts!
Enrique: Not that gnome.

Enrique pointed at yet another creature that was washing up on the shore. Sputtering, it clamored up to where our heroes were situated. 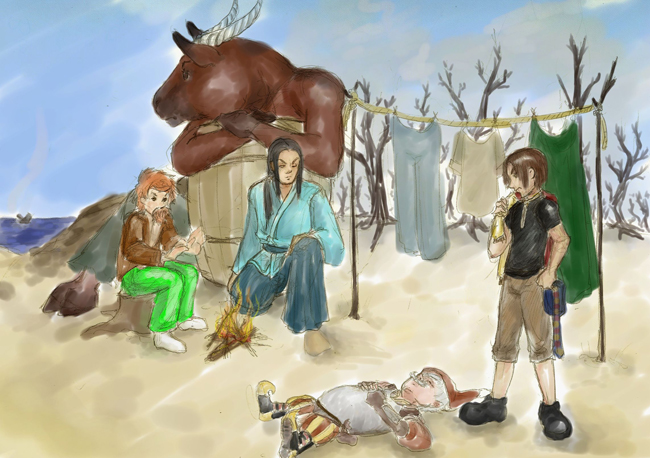 Jonathan: Remember the “creepy laughter” we heard on the ship? I think this is your guy, Captain Render.
Enrique: “Guy”? He’s a friggin’ gnome, not a guy.
Rivers: He’s the one who blew up our ship, isn’t he!
Jonathan: I think so. I also think he’s the gnome who caused that explosion on the island earlier.

Render walked up to the gnome, and kicked it right in the head

Render: What the hell did you do that for, GNOME?

Render: Answer m–
Clyde: Stop bleedin’ kickin’ me!!
Render: WHY DID YOU BLOW UP MY SHIP.
Clyde: You turned all my friends inta bleedin’ trees!
Jonathan: Yes, but then you set them on fire and watched them burn to death.
Jonathan: I don’t think anybody’s going to feel bad for you.
Clyde: Well, I hadta put ‘em outta der misery, din’t I?
Rivers: Huh?
Jonathan: Gnome, you told us before that the explosion was accidental. Now you’re changing your story?
Clyde: Aww wot da ‘ell do you guys know, ennyway!
Render: I’ll tell you exactly what I know, gnome.
Render: I came to this island because I wanted to kill things, and there were supposed to be lots of gnomes here for me to kill.
Render: YOU prevented me from killing said gnomes, because you had to go and murder them yourself.
Clyde: It wos an accident!
Jonathan: Changing your story again?
Render: And then you BLEW UP MY GODAMN SHIP, stranding us here on this island.
Render: So what are YOU going to do about it?

And so ends this month’s edition of “The Gates of Life.” How will Render and our other heroes deal with Clyde? Your votes will decide, so vote wisely. Your choice may have a greater impact than you think….

Render: I’ll tell you what I’M going to do.
Render: I’m going to kill you.
Clyde: Wot?! No! I’m sorry about yer bleedin’ ship!
Render: Too late, gnome! I need to satisfy my bloodlust somehow…maybe your measly death will be enough.

Render: You like to build things, don’t you, gnome?
Render: You’re going to build me a ship.
Render: One that’s much bigger and much cooler than the one you destroyed.
Render: Depending on how good a job you do, I’ll decide whether to kill you or not.
Clyde:  Ye know I’m more inta buildin’ gadgets an’ such, an’ notsumuch tha’ boats….

Render: Rivers is going to fuse you to this stump, and then we’re going to leave you like that, on the beach, in this epic sunlight your island seems to have, until you die of dehydration.
Clyde: Wot?! No! I’m sorry about yer bleedin’ ship!
Render: Too late, gnome! I need to satisfy my–
Rivers: Uh, Render?
Render: WHAT?
Rivers: I’m pretty sure I don’t want to do that.

This poll ends on May 9th.