Editor’s warning: If you’re easily offended, you should not read this review.

Editor’s order: If you’re under 18, you’re not allowed to read this review.

In a marketplace somewhere between Taiji and New Jersey, there was a nondescript virgin, clad in the shittiest trench coat four pounds of DNA and a post-dated check could buy and glasses so dark that even Michael Ridgeway can look like Vangie Rich (and vice versa), wandering through the shabby tables of whozits and ding-dongs and fuckwads and Arabian irony made of tin and flesh.

He was Meteo X. He did not want anyone to know that. Like a man with too much time and sperm on his hands to “get busy” the culturally accepted way, he limped through the alleys sprinkled with chicken carcasses, discovering that it was more fun NOT to avoid them. After an hour of collecting a generation’s worth of body odor from the many other denizens perusing the blackest of black markets, he found the sheltered tent he was looking specifically for.

The green, deteriorating walls held shelves of powders, potions, and children who tasted like the sweat of a wasted future. They screamed and wailed until a fat, stinking Arab man waddled his deceptively lugubrious legs out from the storage pocket. He kissed Meteo. At first to welcome him, but from there….

“And what can I do for you today, my favorite customer?”

“A child!?” The Arab man squeezed the word like he was farting out of his mouth with excitement. “Good. Take one of these queer children; they are weighing down my expensive shelves.”

“Say it again, my friend?” said the blackening stereotype.

“Ahhh…I knew you’d be back, my lovely friend. Can’t get it up? Too small for you to handle? I get it…you finally found a woman—no, a whore—to consummate your journey into adulthood? Ahahaha. You fucking loser. I breed and sell children to buy rich and fancy things, and yet somehow you disgust me. YOU. DIS. GUST. ME!” He gave Meteo an Elixir and grabbed him by the shoulder, ushering him out and shouting:

Meteo grabbed the potion and darted through the streets. The chicken carcasses and dying children covered in vomit all laughed at Meteo in his shame….

Later that night, a tall woman, 6′ 2″ and 187 pounds, slim on top with a fat ass, dressed in leather and denim, came to call on the lovely young Meteo Xavier. She stood at his doorstep. When he arrived, she pressed against him without love, but managed to squash her modest breasts and rather sizable vagina against HIS modest breasts and surprisingly large vagina. They went inside, straight to the bedroom. She sat down on him and made small talk while he struggled to breathe under her weight. Finally, he told her to shut the fuck up and brought out the Elixir.

He dripped some on her shoulder and licked it like an epidermal lollipop. The juice worked quickly, and suddenly what tasted like suntan lotion soon tasted like chocolate barbecue sauce. Meteo kept licking and soon it tasted like Jesus Himself. The woman, named Alexia J., squealed like a pig and jumped on top of Meteo.

What followed was six minutes of the most one-sided, physically impossible, and downright baffling wrestling match in all of Christendom, and also definitely the loudest. The elixir was also a lubricant, and its magic was working well…too well.

So well that when Meteo finally whipped it out (or, more accurately, simply produced it), Alexia took one look at it and laughed her fat hippie ass off. “THAT’S it? Oh my God…it’s so cute…but….” She didn’t finish her sentence; she just got up and left the bedroom. Meteo followed and pleaded with her to stay. He begged her to stay so he could lose his virginity once and for all. She laughed at him. She screamed at him. She raised holy fucking hell over how much time she wasted on such a tiny little loser.

She walked to the kitchen, out of Meteo’s sight, and punished him for wasting her time. She pulled down her pants and menstruated on the tile floor. Then she got on her motorcycle and left.

And there was Meteo, heartbroken, depressed, sad, and still a virgin. The magic in the air turned to lead, and he breathed in that lead, and it choked him. He cried desperately, hearing all the things she would say to her friends, making it impossible for him to feel love forevermore. Life was over. He went into the kitchen and stared at the blood that would always be a reminder of Meteo’s immortal failure.

Something was shining in the blood: a copy of Rhapsody: A Musical Adventure for PS1.

It was brand new…. 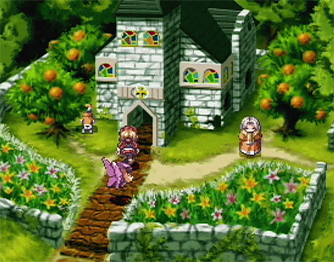 Umm…I found this game at a flea market back…umm… several years ago, and I decided to review it this month.

Two reviews in one month? Only in America!

Umm…so, Rhapsody: A Musical Adventure is a rare little title—or I guess it was, until NIS America decided to port it to the DS—that tried to make a splash in the PlayStation market. In a lot of ways, this is almost parallel to Thousand Arms.

Basically, it’s supposed to be a strategy RPG for little girls. Which is why I played it. But only the battle screens resemble strategy RPGs, and even then only barely. Absolutely nothing else in this game is strategy at all, which is either great or awful, depending on your particular ungodly fetish for torturing yourself through interactive entertainment.

In fact, the game is MUCH less than 80 hours long. The game is only half-fucking-done. I got through the game’s copy-and-paste dungeons in 15 hours. It’s also INSULTINGLY EASY. It’s like the developers were literally targeting little girls who are afraid to play strategy RPGs. I have dreams where I breastfeed babies, and even I don’t come up with shit like that. 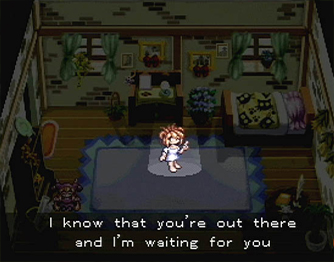 That one paragraph overwhelms the almost full page’s worth of stuff to actually like about this game. First of all, the characters are fairly likable and the script is really damn funny. The game is, for most purposes, really efficient to get through, which is always good. You can capture a wide range of other characters (though you hardly need them) in a Pokémon/Chrono Cross system of recruitment.

Some of the individual scenes are quite good. There is a beauty pageant that is really well scripted and, for a moment, brings some real weight to a paper-thin game. There is also a really surreal moment where you travel through a worm. Another character, your rival, is also a lot of fun to interact with and one of the best parts of the game. Even the ending, which is so abrupt it makes my sphincter curl up like cheese, is done in a way that is simple and tear-jerking.

None of this, of course, makes up for the fact that there is only half a game here. Or that it’s way too fucking easy, or that every dungeon is basically the same. Even a musical CD has more gameplay than can be found here, and that’s a shame, because Rhapsody had a lot of potential and quite a bit to offer.

(As Meteo finishes his review, he cannot help but hearken back to those dark days and wonder. What was originally conceived as a gift was not worth the time and effort it took to play it. Meteo misses that bitch still and often wonders if she’s still around or….

Render: I’ve been thinking. I’m never going to find my life’s true calling while I still have ghosts of my past holding me back. Jonathan, set a course for my homeland, Trelenodora. I have some ...