Hey look, everyone, it’s time for the monthly update of testgame! This month’s article is short and sweet, but don’t let that fool you. We’ve got a nice handful of new things to checkout in the game as of right now!

The most important new thing in the game builds directly upon last month’s update. Yes, that’s right, we’ve got even more important Plot Advancement going on with Herkimer. For those of you who missed last month’s article (and I don’t remember whether I actually said this or not), all this new stuff with Herkimer basically represents the big turning point in the game, plot-wise.

The Big Reveal (as Real-Life Paul keeps calling it) happened last month, but this month’s new dialogue expands on the information and explains some things, so this is a very critical time. Basically, if you have any interest in testgame at all, now is the time to play, because we’re actually getting somewhere. For those of you who have played up through the secret tower room in the castle before, I’ve even given you a super helpful save file in this month’s update that starts right from that point, so you can get all the Herkimer stuff without having to play through the whole game (which, having just done that, is surprisingly long).

Other than that, I don’t have anything too exciting to report. I’ve been mostly working on background graphics, and really trying to nail down the way the forest screens should look. I actually feel like the screen outside of Paul’s room might be finished now—I’m extremely happy with it currently—and the central forest screen is heading in the right direction. There are a couple of other small additions and/or changes that you can read about in the bulleted list below. 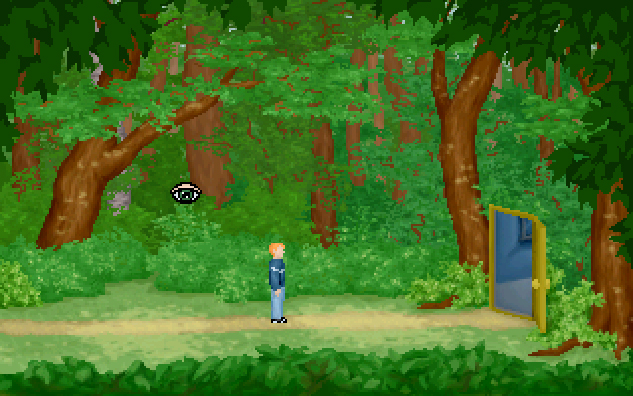 If you’re using Windows Vista and you want to load the game from one of these save files, you’ll have to move the agssave.001 and agssave.002 files that I’ve given you into a folder called “New game” under the “Saved Games” folder in your Windows user name folder. If you’re using Windows XP, the save files should go into the folder C:Documents and Settings[your user name]My DocumentsMy Saved GamesNew game.