I jump at the chance to review any edutainment games. I have fond memories of the greatest educational game ever conceived, The Logical Journey of the Zoombinis.  I believe we can never learn enough, and that if we keep learning, our brains will grow bigger than our heads and our children will be born with massive IQs. I’m also a sucker for the amateur games scene. While many successful amateur games make my list of favourite games (such as Cave Story and Noitu Love 2), I also cannot help cuddling the unloved abominations whipped up by people with the ideas and the know-how, but hardly any design talent. Such as this one.

Space Math is an Xbox Live Indie Game, meaning that it was developed independently and without much oversight. It clocks in at around 2MB, and costs 200 Microsoft Points (a couple of dollars). 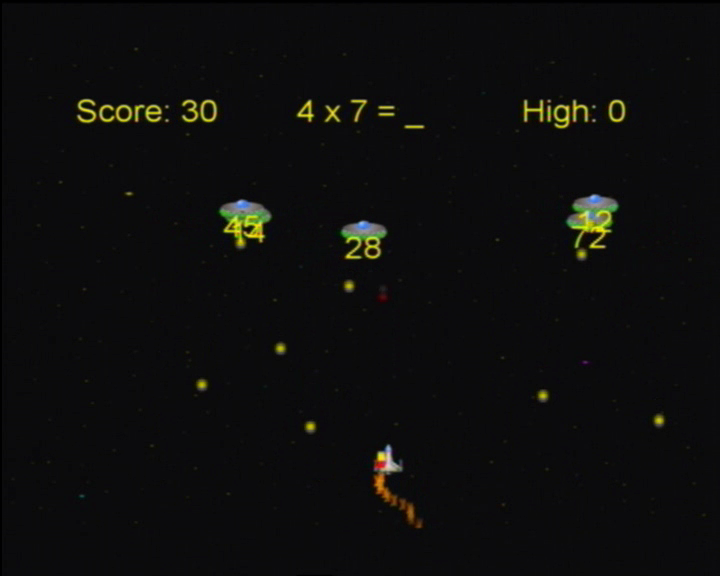 Space Math is a primitive Space Invaders, but without the enjoyment factor. Admittedly, you would expect it to be. With a name like Space Math, you know it is going to be horrendous. It doesn’t even have a title screen. I’ve been spoilt by some pretty stunning Xbox Live Indie Games (Kaiten Patissier, Green Island), so I was at least expecting something that doesn’t offend my eyes.

Other things that offend my eyes? Kissing in public. People with their flies undone. Alcoholics.

But, somehow, Space Math managed to consume an hour of my life, so it can’t be entirely dreadful. And even as I write, I feel an urge to play some more, despite knowing I’ll line myself up for a fall. But it doesn’t matter; soon after I redeemed my review code, Microsoft blocked me from playing Xbox Live Indie Games. Yeah, makes absolutely no sense.

The overall idea is pretty good—an entertaining space-romp that teaches you a lesson or two before you stop playing. But these lessons aren’t mathematical lessons; they’re lessons concerning how not to create videogames.

The general gameplay consists of “shoot the correct answer.” A math problem appears at the top of the screen, and, just under it, a few oddly coloured objects resembling sombreros fly around with numbers dangling from them. The goal is to shoot the sombrero carrying the correct answer while they all fire yellow dots at you.

When you’re hit by one of these yellow dots, your barely visible health bar deteriorates. When your health is depleted, it is game over, and your high score is saved.

Besides its ugliness, Space Math also has aural diarrhea, and this needs to be addressed. The game’s sound library consists of about four sound effects, all of which sound like they’ve come straight from a “Make Your Own Clichéd Futuristic Shooter” royalty-free sound set.  Space Math definitely makes a lasting impression with its audio, but not one you’d specifically seek.

The “sci-fi alien blaster” shooting noise, when playing on Hard difficulty, is a constant audio rape—scarring your ear drums with its very percussive and rapid barrage. In order to rescue my ears from this horror,  I loaded up my media server and started playing some Kanye West over the top. The bullet sounds become a nice syncopated addition to the backing track of “Stronger.” This doesn’t make the sound forgivable, though.

At least the game isn’t broken. The settings are highly adjustable, allowing you to switch the problem types and change the minimum and maximum answer numbers. You can also change your difficulty mode, which doesn’t make the questions harder (as you’d expect). Instead, it just makes the answers harder to hit—and precision is key in Space Math. If you are not precise, you do not score.

But ladies and gentlemen, this is maths. Because the maximum number and minimum number can be set, making them both the same number makes all the questions the same, and all the answers the same. The game becomes “shoot zero” until you eventually die from bright yellow bullet jaundice. Perhaps an oversight, or maybe the developer had intended to create a scoring exploit within his game. 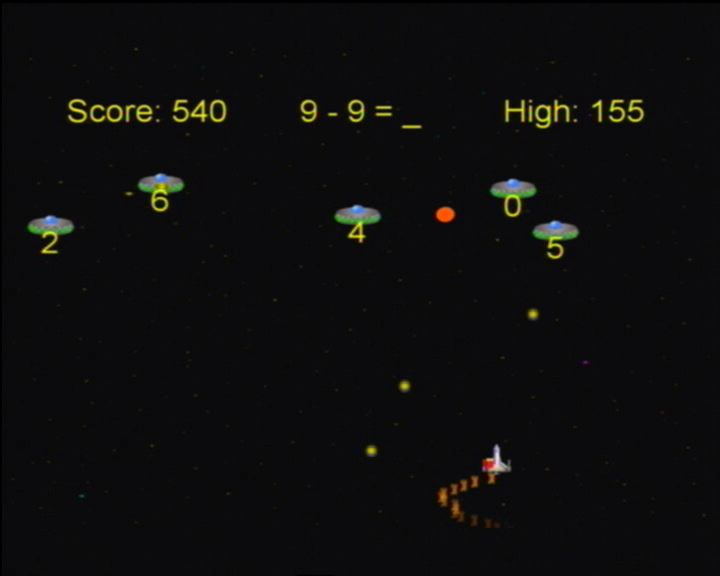 Potential improvements to Space Math are technical and aesthetic (and mandatory). First off, there is a bug that allows you to avoid getting shot by pausing (the bullets continue to fall as the game is paused, allowing easy navigation, and they don’t deal any damage)—fixing this would be a good start. Then fixing the visuals, which are akin to staring a pug in the face, would be advised. Developer hotshot 10101 should try making the game look and feel less like a generic Flash-based action-script game.

As for making the game more challenging, it would be a good idea to allow multiple styles of problem in one session (i.e., a random mode that includes all of the problem types).  Also, the lack of division as a problem type needs to be addressed, as this is as hard if not harder than multiplication, and people are more likely to need help with it.

At the listed price and considering the gameplay, hideous graphics, and overall lacklustre presentation, Space Math cannot make up its mind whether it believes itself to be an abomination or gold dust. There are much prettier and varied games on the Xbox Live Indie Games Marketplace, and some are quite cheaper, so Space Math will have a hard time standing up to them.

It is a good effort, but I cannot help but feel this product would, if boxed, have already found its way to a New Mexico burial site.