Hello, and welcome to “The Ten Reasons,” where I discuss ten reasons why I like or dislike a game. This month, I’m talking about Mega Man 2 for the NES, one of the rare sequels that is better than the original. It’s a game so awesome that GameCola has two video walkthroughs for it, one by me and one by Nathaniel Hoover.

[Editor’s note: Michael originally wrote this article last summer, though this is the first time it’s being published.] 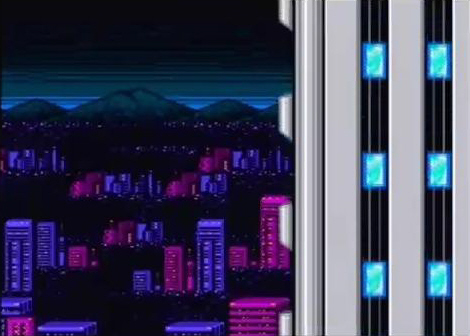 The game starts off with an awesome cutscene in which the game’s story is described while the camera does a slow pan to the top of a building, where Mega Man is standing, his hair waving in the wind, looking like he’s a studly cover model for Wired magazine. That’s basically all there is to the cutscene, but it’s still very cool-looking, and it comes complete with great music.

Although, it’s kind of creepy that the opening cutscene says the game takes place in 200X. It’s 2009 now, so either these events already failed to happen, or Dr. Wily is going to attempt to take over the world soon. Will Dr. Light’s robotic technology soon make headlines? Is this something that many other people have already pointed out? Only time will tell.

Note from 2010 Michael: Apparently, time tells us that it’s 2010 now, and Mega Man 2 should have already happened. Oh no! 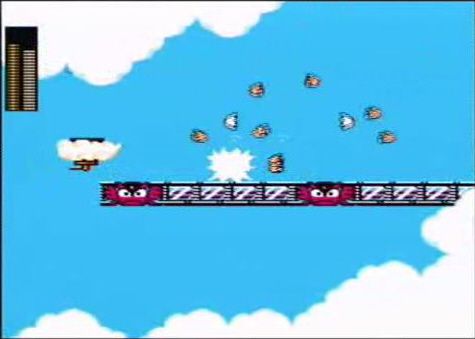 If there’s one thing that says “Mega Man game” to me, it’s “giant robot animals,” whether it’s hippos, cats,  penguins or cows. Actually, no, not cows. I don’t think they used cows in any Mega Man games yet. That would be an odd choice for an enemy. Then again, so was Top Man. I guess that means Cow Man is always a possible enemy for Mega Man 10.

Another Note from 2010 Michael: I was joking about Cow Man, but Sheep Man has been confirmed as a boss for Mega Man 10. The world is a very strange place sometimes. Especially when robot animals are involved.

Anyway, the robot animals in this game that take the cake are the robot frogs and robot birds. They both come with the unique ability to make mini-versions of themselves. You’d think this would be a gimmicky attack that doesn’t work or make sense, but it does. The frogs spit out mini-frogs, which makes perfect sense because frogs have large gullets. The birds drop eggs containing mini-birds, which makes perfect sense because birds come from eggs. So it’s a creative idea that works well. Great!

Also, Nathaniel Hoover informed me that holding down the A button when picking a boss causes a flock of birds to appear during the enemy introduction scene, which is a fun little extra. 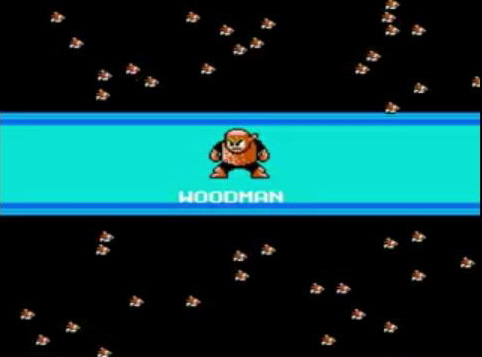 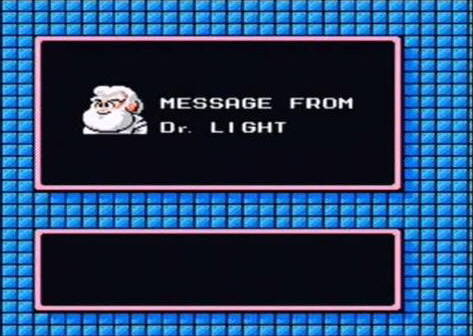 Complimenting the cool opening scene is a cool plot! Dr. Light calls Mega Man in this game to give him special weapons, the creatively-named Item 1, Item 2, and Item 3.

…OK, so that’s all there is to the plot, but I like it nonetheless. It’s good to see that, while you’re going through the stages, Dr. Light is busy at work making new items for Mega Man to use. So that’s what he’s doing when he’s not onscreen. Good to know. I mean, haven’t you ever wondered what the characters in a game are doing when they’re not onscreen? Like, in Legend of Zelda: Ocarina of Time, does Link TALK when you’re not playing the game? He has to, right? That’s how everyone knows his name—he told them his name when I had the game turned off. Gosh, maybe Link secretly dislikes me, because I take away his ability to speak, on top of taking control of his entire body, sending him into dangerous locations and (occasionally) killing him. Man, now I feel like a jerk. Sorry about that, Link old buddy! 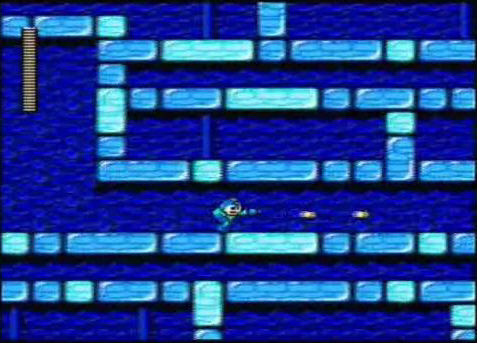 The graphics in Flash Man’s level are really good—the above screenshot doesn’t do the game justice because it doesn’t show off the fact that the background flashes. Yes, those crystal platforms change colors, and it looks cool. Overall, a really good level design.

Speaking of flashy, have you seen the video advertisements on YouTube lately? Have you noticed that they’re bigger than the actual videos onYouTube? What’s up with that?

It’s not just YouTube, either. All other websites with playable videos, like NBC.com, have video ads that are bigger and higher quality than the videos themselves. And, of course, the advertisements play with no delay whatsoever. It takes five minutes of “buffering” to play the video you want to see, but there’s no buffering at all for the ad that nobody wants to see.

Which doesn’t make sense! If the ads are bigger/higher quality than the videos, it should take longer for them to load! But instead, they’re always the fastest things that load on any website, no matter what their size. It’s like…websites don’t need to buffer, but they just fake it to give you more time to look at ads. It’s a conspiracy, I tell you! Advertising is trying to rule our lives! 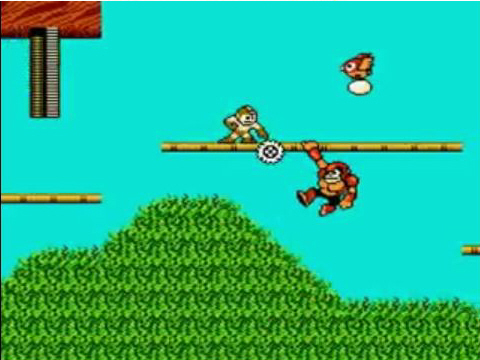 I mentioned robot animals earlier, but for some reason, I decided to list the gorillas in Wood Man’s level separately. They jump up from the bottom of the screen, swing back and forth on the platforms, and when you get too close, they swing up ONTO the platforms and attack.

Talk about going the extra mile when it comes to enemy animation. Frankly, I was impressed by the idea of enemies popping up from the bottom of the screen to land on a platform above. Seeing that idea go further is icing on the cake.

Man, cake is delicious. To be honest, I’d rather eat cake than play Mega Man 2. 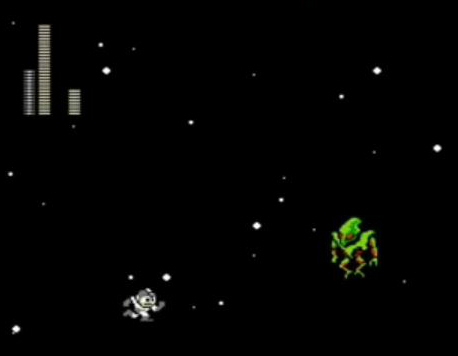 The final boss of the game is an alien that spins around the room. This is a good boss fight, and it works particularly well because it uses the star background that you saw eight times before in this game, every time when you selected a level.

No, it’s not being lazy and re-using backgrounds—it’s taking the background that was just a pretty effect earlier on and making it relevant to the game. It’s a great idea to incorporate the level selection screen into the actual game. Plus, it ties into the fact that Dr. Wily flies around in an alien UFO. All in all, a good idea. 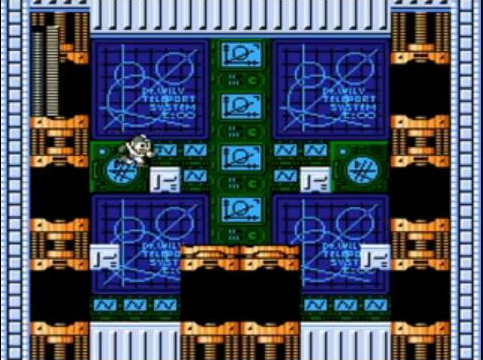 There were a lot of changes made between Mega Man and Mega Man 2, and I think they resulted in a better game. One of the improvements was the addition of two bosses, a tradition continued in all further NES Mega Man games. Another tradition that got continued was the inclusion of E-tanks—items that you could collect and use to fill up Mega Man’s life whenever you wanted, which is so incredibly useful.

However, the change I enjoy the most is the tweaking of the “fight all the bosses a second time” challenge from the first game. Now, you fight all the bosses in a row via a room with eight teleports, and you get a full energy pellet whenever a boss is defeated so you actually stand a chance of getting through the challenge alive. It’s only a small change from the first game’s challenge, but it stands out as perhaps the best variation of the challenge, one that gets used over and over again in later games.

Reasons Why I Dislike Mega Man 2 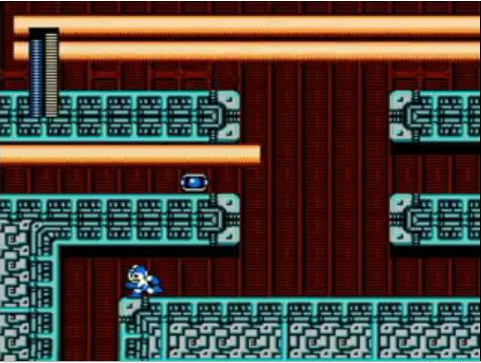 Did I mention that the Cheez Whiz is a one-hit kill? Yeah, if it touches you, you die instantly. There is no room for forgiveness in this challenge.

And, of course, because you have to memorize nine rooms, you will probably die more than nine times, because there’s no way to memorize the room layout ahead of time. Overall, it’s a really, really hard challenge. 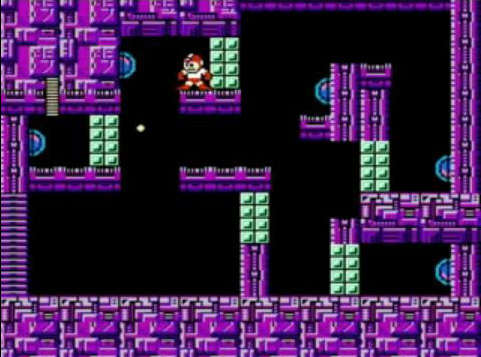 My least favorite boss in the game is this boss, for the following four reasons:

1) You need to have perfect aim. You cannot miss a single shot, or else you will die.
2) The close quarters make it hard to dodge.
3) The jump to reach the platform Mega Man is standing on in the above screenshot is very tricky.
4) There is so much sprite flicker in this fight that you cannot see what you are doing.

It’s like they were purposely trying to make a boss that’s near-impossible to kill. It’s hard to dodge, you can’t miss a shot, it involves tricky jumps AND you can’t see what’s going on in the fight. All it would take is just one more challenge to up the difficulty factor, and I would never play this game again. Something like…I dunno, an evil cow that chases you the whole time so you can never stand still in one place. Yeah. Add a challenge like that to this boss fight, and you’ll have one dissatisfied gamer. 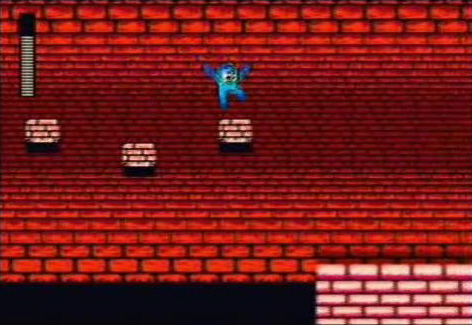 Heat Man’s stage is mostly made up of jumping challenges where you make a series of jumps across platforms, and if you make a mistake, you fall into the lava of instant death. This is combined with the disappearing block challenge, where you can’t see the platform you want to jump to ahead of time, so you have to memorize where the blocks appear.

This would be fine and dandy, but there’s a section where you have about twenty of the disappearing blocks all in a row, which involves far too much for me. There’s no challenge to the section; it’s just route memorization, which is boring.

Well, there are my ten reasons for Mega Man 2, offered without any reference to Air Man, everyone’s favorite fandroid. See you next time, everyone!

But hey, you can still watch these two videos, recently released by Telltale Games! The first video talks a little about Christopher Lloyd (now 115 years old) once again playing the role of Doc Brown