For those not aware of what Katamari Damacy is, and why the series has such high acclaim, I recommend you do some prior reading. Take a look at Casey Levine’s review for the game, from a GameCola issue many moons ago.

On paper it sounds like an absolute must-buy, because a mish-mash of elements from every Katamari game ever released would mean I could play levels from Katamari Damacy, which was never released in Great Britain. But of course, the idea of a greatest hits compilation sounds like a waste of money and time for those who have played all the games before.

Then again, it can be an exciting trek down memory lane, and we’re all fans of being reminded of stuff we’ve long forgotten.

And speaking of “forgotten,” we have Katamari Forever‘s first flaw. Someone at Namco forgot to include online multiplayer. You see, I own at the online multiplayer for Beautiful Katamari. I was ready to slide that Blue-ray disc into my PlayStation 3 and school a load of newbies. Teach them what it means to clump shit together, and show them how I roll.

The absence of online play is, for lack of a better word, appalling. It really brings Katamari Forever down. 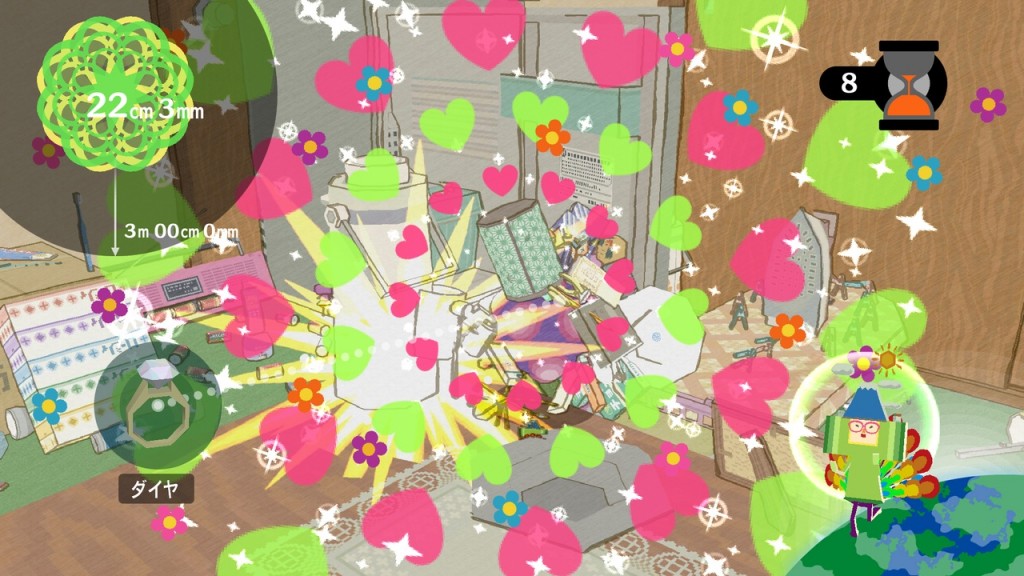 I managed to shrug off my disappointment with Namco for dropping online play, and sped on full-throttle into the single-player mode. My general feeling is that they managed, for the most part, to get this right, although I sure as hell have bones to pick, too.

Firstly, as I’ve become accustomed to the Xbox 360 controller’s ergonomically designed analogue sticks, playing Katamari with the PS3’s aligned sticks made me perform like a drunken sailor. I now tend to make a meal of what would normally be easy-to-perform turning movements.

Secondly, the absolutely hideous addition of screen filters does, at times, make playing the game completely impossible. In the level where you must light a campfire (oh, Christ, not that one…), it is fatal to touch water. It would be much easier to avoid doing this without the awful and mandatory monochrome mode.

Then, to add insult to a very painful injury, we have the Prince Hop. The Prince Hop is one of the most annoying additions in this title. Trying to perform the move properly requires flicking the Sixaxis controller upwards with the velocity of violent vomiting.

Seeing as the Sixaxis chooses when and when not to work, you’re lucky if you can beat the minimal amount of levels that require using the Prince Hop.

If it wasn’t for this move also being mapped to the R2 trigger, I’d have exploded in pure rage. As this move wasn’t present in any previous Katamari title, it begs the question “what purpose does it serve here?”

I understand that Namco was perhaps trying to do something new with the series—but they’d have probably been better off making more new levels and re-using less of Beautiful Katamari‘s. 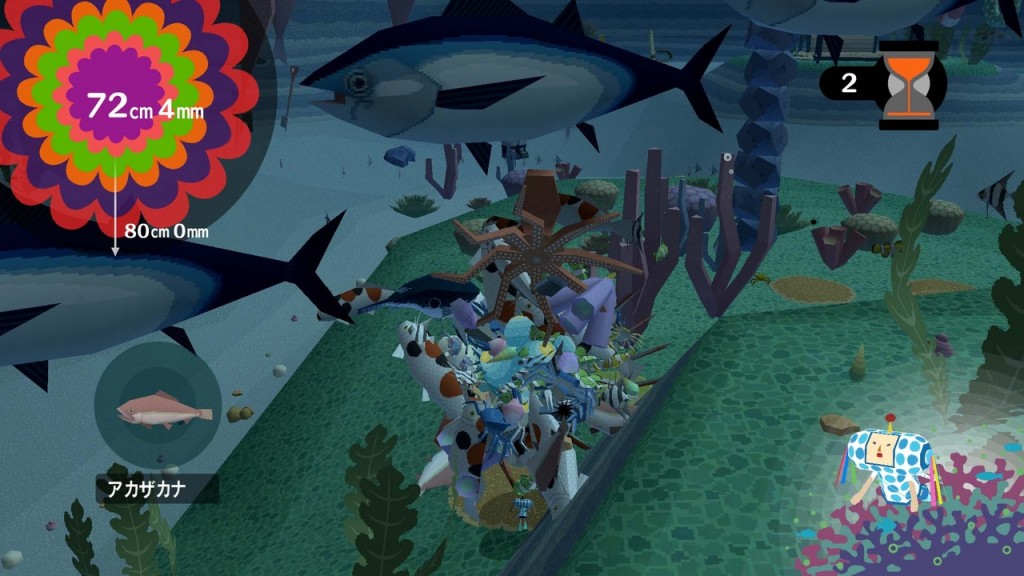 At least the levels were chosen competently, bar a few really annoying selections (I’m sure I already mentioned the campfire request). There are two separate request strings: one handling traditional-style missions (x big in y time), while the other caters to the unique requests (roll up the biggest cow or bear you can).

Since the list is organized this way, there is a steady mix of traditional and obscure requests heading your way constantly.

However, as with the other Katamari titles, it is awfully easy to accidentally skip chunks of the King’s explanatory text. When you’re sitting down to the levels that are unorthodox, and you’re no longer told what you need to do during later attempts, you cannot even start to guess what you’ve missed.

Returning to the shameful campfire request, even when I had rolled up a decent fire, I couldn’t light the kindling required to beat the level. Soon after, my Katamari cooled down, and I failed.

This isn’t my fault; the game requires that you keep a combo going, which makes the mission tough for what appears to be just shits and giggles. Several attempts and several game-over screens led to the inevitable rage quit and moody stomp, and the twenty minute break.

Upon my return, having quit the game and reloaded, several more attempts were taken, some even closer to the goal than before, yet all of which still lead to failure.

It turns out that you merely have to become large enough to pick up the kindling, even though the King specifically asks you to light it. In that regard, not only was the whole thing incredibly vague to begin with, but the actual requirements were different from the instructions.

If I can’t figure out how to complete a level, and there aren’t any hints, and nobody else had a problem with the mission besides me—then what is my remaining option? To bitch about my inability in a review? Figures, doesn’t it.

In general, the key thing that publishers should note going forward is that they should not lie. I’ll no longer be fooled by the word ultimate. If Katamari Forever is considered the ultimate rolling experience, as the box claims, then someone somewhere needs to stop kidding themselves.

For this to be the ultimate rolling experience, the online really needed to be there, as well as the ability to turn all graphical filters off from the outset. While Katamari Forever does manage to be a faithful tribute to the series, its shortcomings are just enough for it to be marked down in every category. 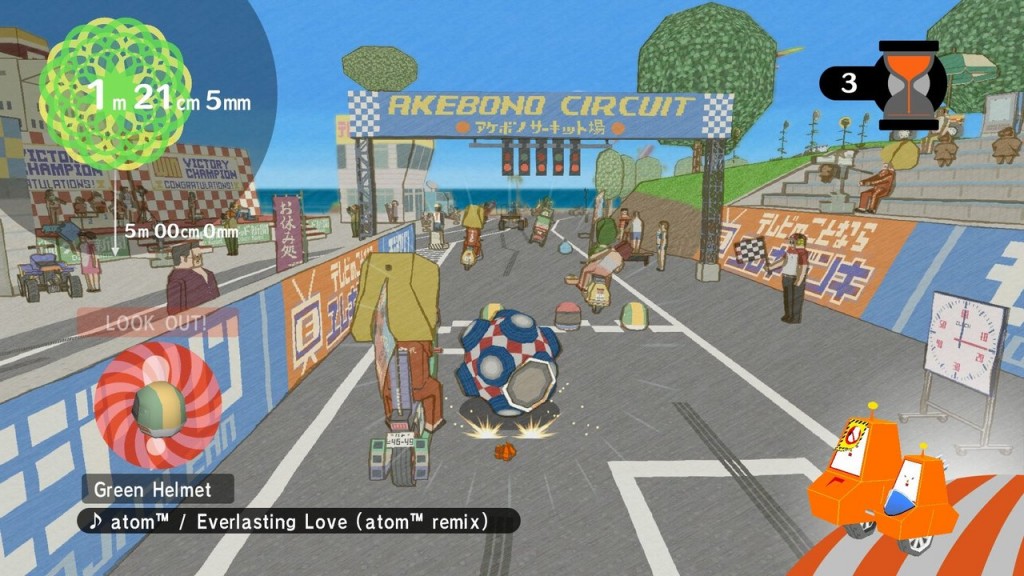 Now that the bitching is out of the way, we’re ready for a roll down Praise Highway.

The soundtrack, as always, is incredible. However, this time, as the game is considered a tribute to the series, many Japanese musicians and artists who love Katamari have lent a helping hand to remixing some of its most famous tracks.

Amongst them are three (yes, three) remixes of “Everlasting Love,” possibly the greatest song in any Katamari game. However, the complete lack of a “Que Sera Sera” remix dampens an otherwise perfect selection of songs.

Upon beating the game and completing the final three levels (which need to be seen to be believed), you unlock Katamari Drive mode. This is a second run-through of the game, but time-limits are shorter, and your Katamari moves at the speed of Warp 9.

These levels are extraordinary and make all the crap you had to put up with to unlock them totally worthwhile. I do add, a 120 points on the campfire request in this mode had me freaking out for hours.

After these levels, there are unlockables to be claimed, including the bonus games from the credits of every Katamari game.

If you’re new to the Katamari series, you will have the most fun you’ve ever had. If you’re a veteran roller, there is enough in this game to make it appear fresh, but the difficulty has been ramped up in places, making high scores further out of reach than before.

I feel the novelty of these games has worn off a little now, but if you’ve got a PS3, take advantage of a discount and nab this game while you can.

For videos of gameplay footage, try out my runthrough of the first thirty minutes (please). I need the hits!